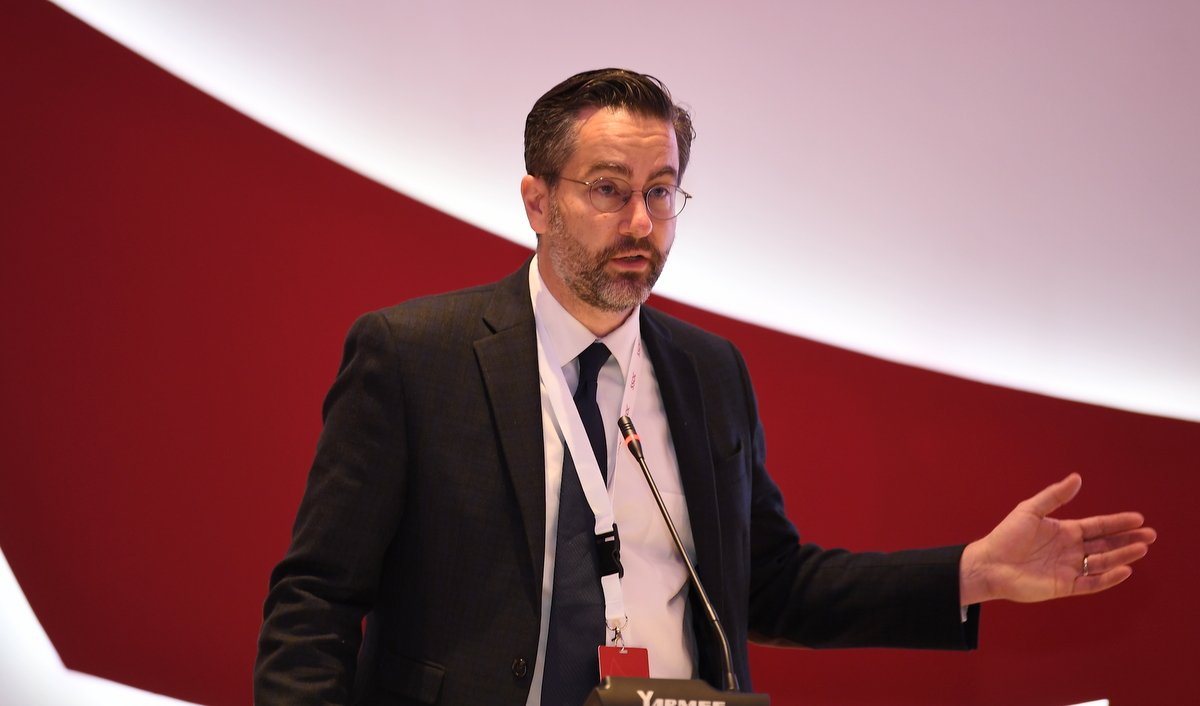 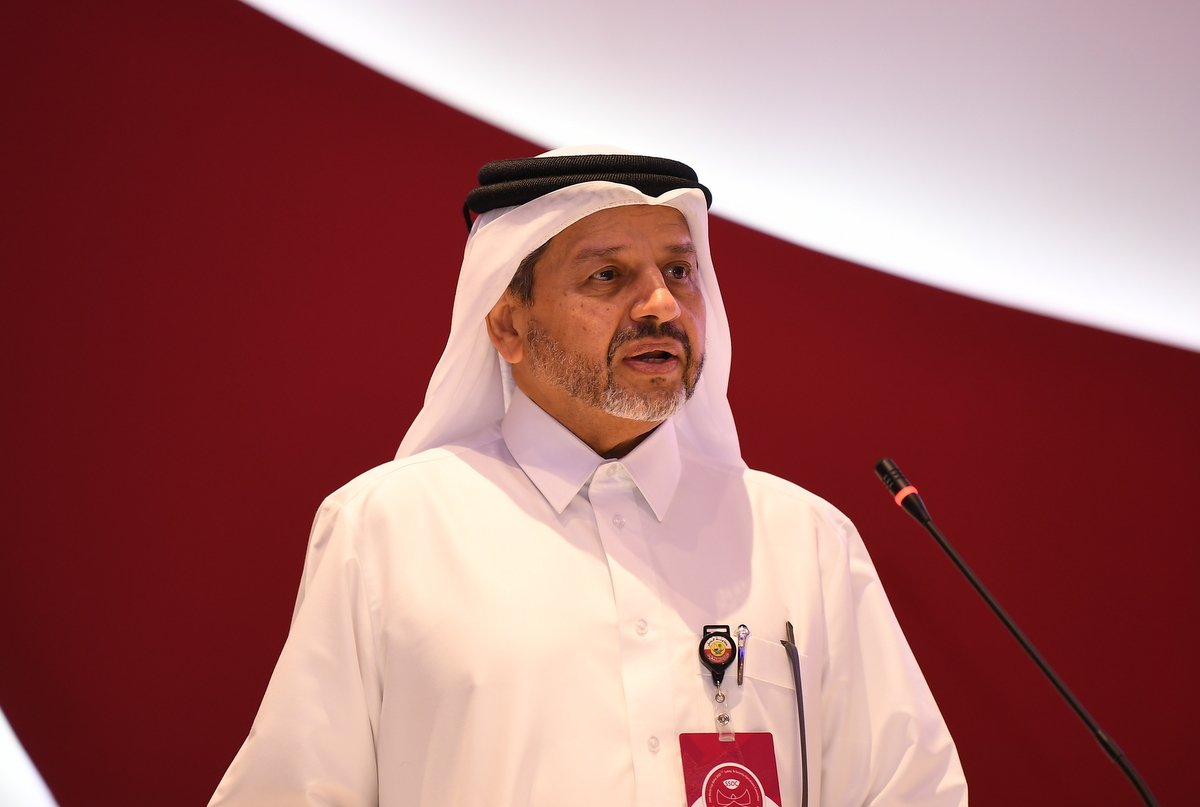 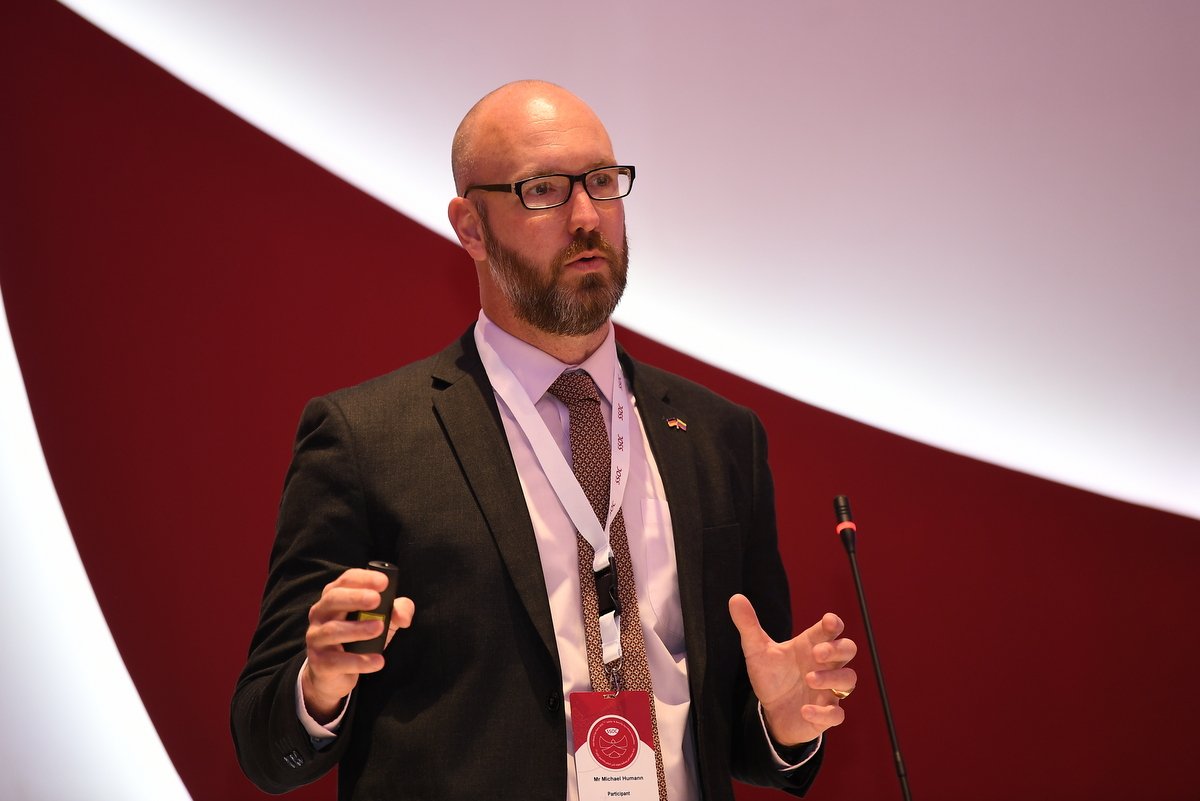 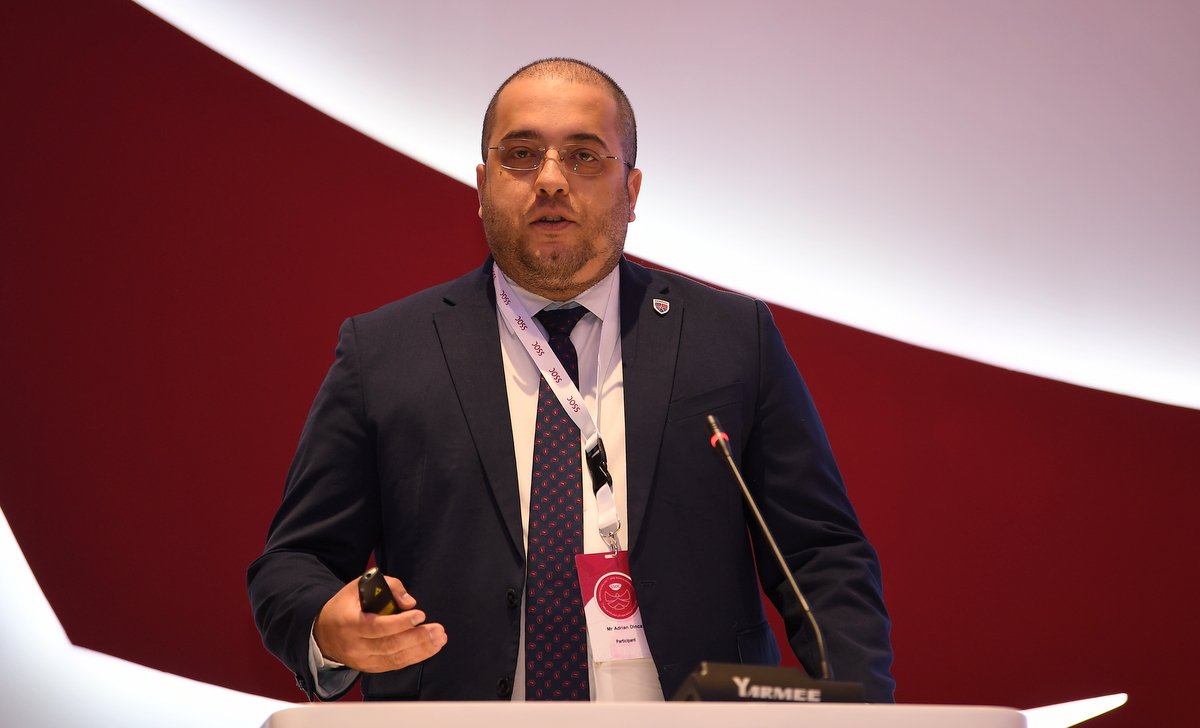 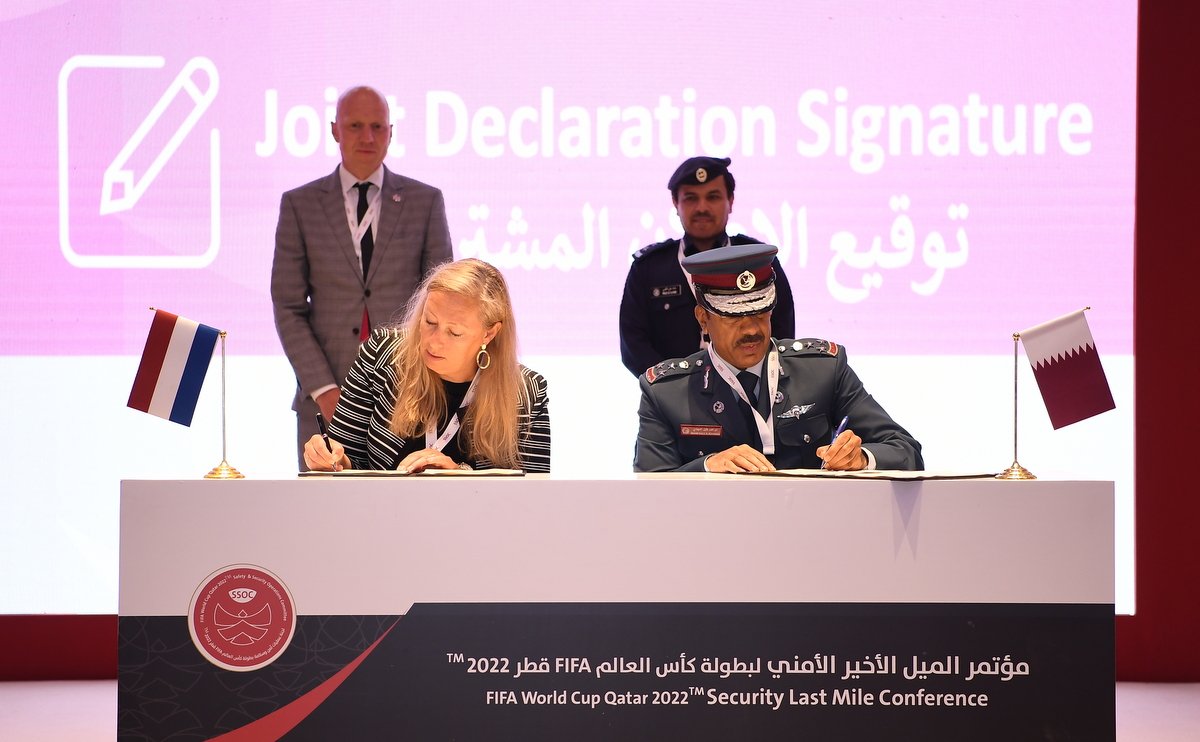 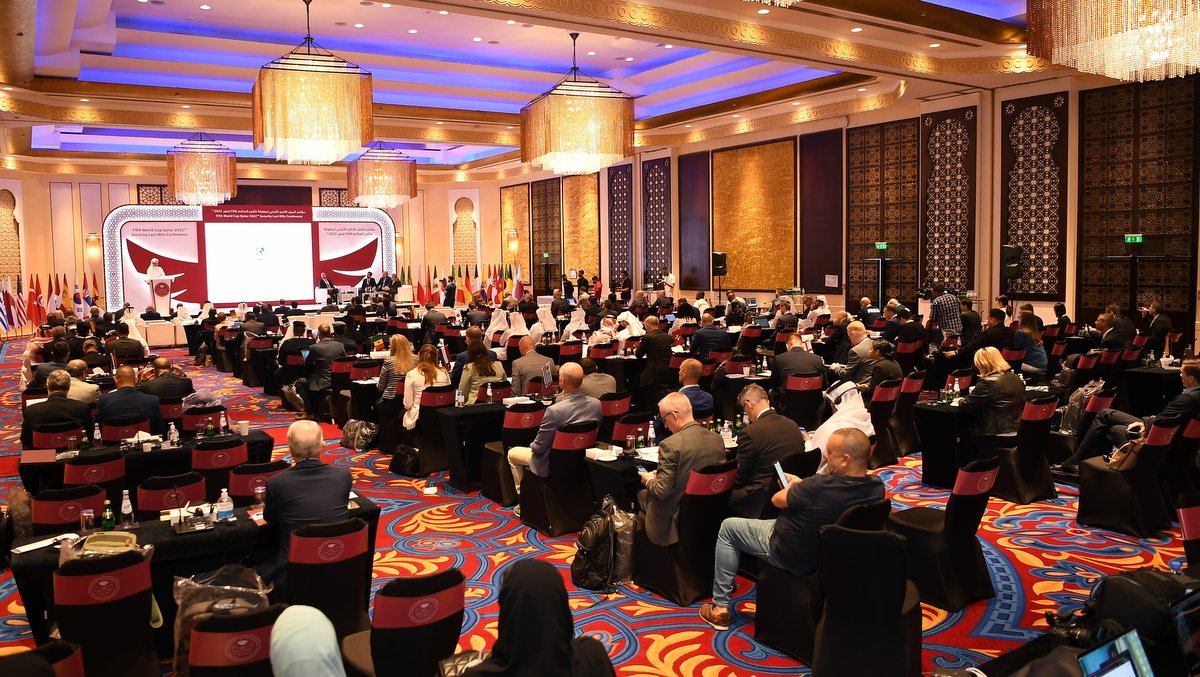 Second and last day of 2 day FIFA World Cup Qatar 2022, Last Mile Security Conference witnessed the signing of an agreement between the State of Qatar and the International Criminal Police Organization (INTERPOL) to extend cooperation for Project Stadia.  Project Stadia was established by Interpol in 2012, with funding and support from the State of Qatar, with the aim of serving countries wishing to host major sporting events.
On behalf of Qatari side, Chairman of the Security and Safety Operations Committee of the FIFA World Cup Qatar 2022,  Maj. Gen. Eng. Abdul Aziz Abdullah Al Ansari signed and Stephen Kavanagh, Executive Director of Police Services, Interpol signed the agreement.
A joint declaration on the International Police Cooperation Center was signed between State of Qatar and a number of countries participating in the conference.
During the signing ceremony, Stephen Kavanagh expressed his thanks and appreciation to the State of Qatar for the efforts it has made over 10 years in supporting the Stadia project He stressed that the project was capable during this period to enhance
cooperation and joint planning to confront international challenges in the field of sporting events.
“The bonds of communication between the State of Qatar, FIFA, the World Health Organization and other relevant international bodies and organizations were also strengthened and continuation of this approach in the coming years will contribute in achieving the highest levels of security and safety at the international level, said Kavanagh.
In a statement to the media on the sidelines of the agreement signing ceremony, Falah Al-Dosari, Stadia Project Manager said that the agreement to extend the cooperation between the State of Qatar and INTERPOL is an affirmation of the efforts made by the two sides over the past years.
He underlined that the State of Qatar was able to train and qualify its national cadres at the highest level, which made the Stadia project guided by Qatari cadres and nominaten them to participate in international sporting events, to benefit from it.
He said that “During the conference, a number of participating countries expressed their hope to extend cooperation between the State of
Qatar and Interpol for more than two years, which indicates the insightful vision of the Qatari leadership, which discovered the international need for this project long before today and the INTERPOL would like to extend beyond 2024, but before that we have to develop plans and work on that” Al Dosari added.
Al Dosari while discussing about experience of the Stadia project in securing major events over
10 years, spoke about Interpol’s tasks in the areas of combating terrorism and cyber threats, and addressing emerging crimes
He also presented an overview of Stadia Project as an inspiring experience in assisting member states in planning to host major sporting events.
Presenting the paper, he explained that the Stadia project, with the support of the State of Qatar, was able to create a database that would enhance security and safety procedures, and assist law enforcement agencies and relevant authorities while planning and implementing major events.
During the speech, he referred to the bonds of cooperation between the Stadia project and a number of countries that organized and hosted important events during the past few years, including the last World Cup.
He also talked about the procedures and measures that the Stadia project will take in the coming years, including the signing of memoranda of understanding to enhance international security tracks, through
empowerment and training, and exchange of experiences and information gathering among member states.
Michael Humann of  University of Liverpool
addressed the risks and threats facing major sporting events, and how to address them by benefiting from the international from the knowledge earned by the law enforcement agencies in the State of Qatar in securing these major events;
This was confirmed by the 10-year experience, during which a large number of Qatari national cadres were graduated as international
experts in securing sporting events.
He also added that all the data indicate that the upcoming World Cup will be the safest and most secured one.
In addition to this, the great role played by the State of Qatar, not only in supporting the Stadia project, but also in providing the international community with the experiences it has gained.
in this regard, a strategic role that would enhance the efforts of the international community in facing the challenges of major
tournaments and sporting event, Stadia project Manager pointed out.
He also clarified that the success of the Stadia project was a catalyst for the signing of the extension agreement for a period of two years ending in 2024 due to the urgent need for such a project that works to leave a common international legacy, and we are sure that future international tournaments will benefit
from it.
May 23, 2022 / Sports

Doha, 25 June 2022 THE Embassy of Nepal and the Non-Resident ...
END_OF_DOCUMENT_TOKEN_TO_BE_REPLACED