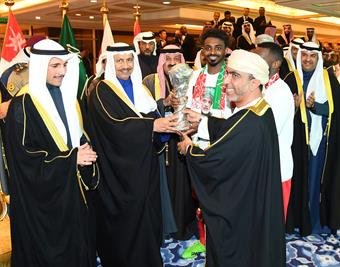 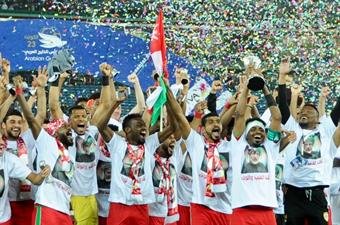 Fayeez Rusheidi, playing in place of Omani legend Ali Al Habsi, has been outstanding throughout the tournament and he came up with an even better performance in the all-important final at the Jaber Ahmed International Stadium in Kuwait City.

In what will go down as two most important saves in the history of Oman football, Fayeez denied the UAE’s best player Omar Abdulrahman twice – saving an 88th minute penalty and then in the shootout.

And then, with the shootout score level at 4-4, Mohsin Johar kept his cool and put the ball past the UAE custodian Khalid Essa to ensure the Sultanate squad will lay their hands on the coveted trophy for the second time.

The title triumph would be doubly satisfying for the Oman players, fans and all those involved with Oman football as it was the UAE who denied them the trophy in the 2007 final with a 1-0 victory and also won the Group A opening match of the 23rd edition in Kuwait under controversial circumstances by a similar 1-0 margin.

For the record, besides Mohsin Johar, Abdulaziz Al Muqbali, Saad Suhail, Ahmed Mubarak ‘Kanu’ and Said Al Ruzaiqi were on target for Oman during the shootout.

The UAE too were on target in their first four attempts with Ali Mabkhout, Ahmed Barman, Ismael Ahmed and Mohammed Al Menhali firing past Fayeez Rusheidi.

But then the Omani custodian read Omar Abdullah right and came up with a match-winning save.

Earlier, it was thanks to Fayeez Rusheidi’s superb penalty save against Omar Abdulrahman that dominant Oman managed to take the final into extra-time.

Though it should be mentioned that for the entire 90 minutes, it was the Sultanate’s squad who dictated terms but failed to translate their threatening moves into goals.

Their lack of finish, after creating a number of goal-scoring chances in both halves, almost cost them the match, when the 2009 champions conceded the penalty with Mohammed Al Musallami bringing down Ali Ahmed Mabkhoot in the danger zone in the 88th minute.

UAE star Omar Abdulrahman walked to the spot to take the penalty. But Fayeez Rusheidi kept his cool and dived to his right to make a splendid save to keep the score at 0-0.

In the first half, playing to a plan and with purpose, Oman dominated the proceedings but the all-important goal eluded them.

The Omanis were in control of the match from the kick off and created a handful of scoring opportunities, two of which should have hit the back of the net.

With coach Pim Verbeek sticking to his preferred 4-2-3-1 formation and starting with the same eleven that he fielded in the semifinal win over Bahrain, Oman showed their aggressive intent with a series of attacks which exerted pressure on their opponents.

The fact that Oman forced the UAE to concede a couple of free-kicks and managed to earn as many as four corners indicated their hold on the match during the first half.

Twenty minutes into the match, it was the turn of captain ‘Kanu’ to miss another opportunity. The veteran midfielder did well to rise above the rival defenders to head the ball sent in by Mohsin from a free-kick but unfortunately for Oman the ball went straight into the hands of Khalid Essa.

Though the UAE too managed to take a shot at the Omani goal on a couple of occasions, the Sultanate’s goalkeeper Al Rusheidi stood up to the challenge and the score remained goalless.

In the extra-time, UAE managed to match the Omanis with their speed and short passes while trying to launch counter attacks. But with neither team able to find their target, the match went to the penalties where Fayeez Rusheidi came up with a performance that will be remembered for generations to come.