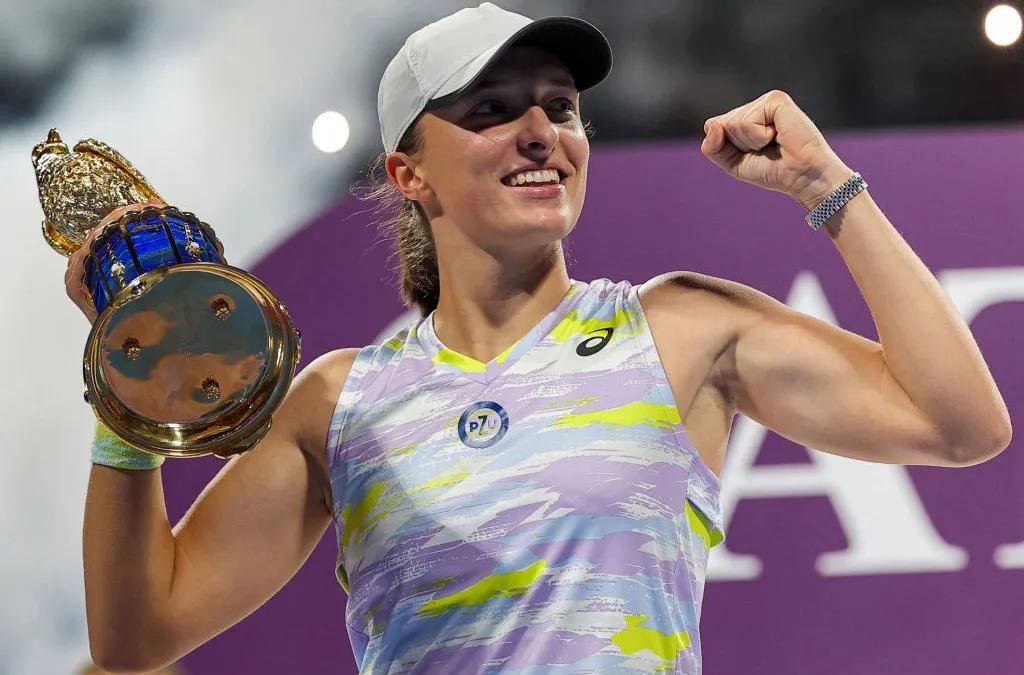 Nine out of the world’s top ten players including World No 1, confirmed to participate in the 2023 21st edition of the WTA 500 tournament. The world No. 1 and defending champion Iga Świątek of Poland leads the star cast of 32 players for the singles and 16 pairs for the doubles events to be held from 13-18 February at the Khalifa International Tennis & Squash Complex in Doha.

Greece’s Maria Sakkari, World No. 6, will likely not be in action in Doha for the $780,637 total prize-money event.

Iga Świątek defeated Estonia’s Anett Kontaveit in straight sets last year to lift the golden falcon trophy for the first time in her career in Doha.

The 21-year-old Warsaw-born player, who went on to add two Grand Slams (French Open and US Open) to her trophy cabinets after the victory in Doha, besides wins at Indian Wells, Miami, Stuttgart, Rome, and San Diego; in what was her best year so far on the tour, will be joined by super stars including OnsJabeur, Jessica Peluga, Caroline Garcia, ArynaSabalenka, Coco Gauff, Daria Kasatkina, Veronika Kudermetova, and Belinda Bencic to give tennis fans in Qatar and the region a treat of a lifetime.

For World No. 2 Ons Jabeur, the highest-ranked African and Arab tennis player in WTA and ATP history, a victory in Doha will not only cement her legendary status in the region, but will also ensure the tournament has an Arabian or African winner for the first time in its history – a record many people are looking forward to.

The 28-year-old Tunisian narrowly missed out twice on having a Grand Slam crown on her head last year, having suffered disappointing defeats at Wimbledon and at the US Open.

While all eyes will be on the top superstars as the favorites, two-time winner Petra Kvitova will also be waiting in the wings with the expectation of making history of her own as the first player to lift the coveted trophy thrice.

Of the four lucky players who have been two-time champions in Doha, namely Anastasia Myskina, Maria Sharapova, Victoria Azarenka, and Petra Kvitova, only the 32-year-old Kvitova and Belarussian Azarenka remain in contention to break the record and make history. While Kvitova is one of the confirmed players for the main draw, Azarenka, on the other hand, is on the alternate players list at this year’s edition.

Tournament Director Saad Al Mohannadi said that ‘It is a great privilege to have almost all the top players confirmed for the Qatar TotalEnergies Open once again. Their desire to be a part of this tournament is a further confirmation of the reputation it has garnered over the years, the recognition of the organization, and the maximum attention to detail everyone involved in the tournament has always put into it. “We appreciate TotalEnergies, the title sponsor, and all our other supporters for their commitments over the years in always making this tournament a great success’.

He said that this year’s edition is unique in that it is the first major tournament to be hosted by Qatar after the grand success of the FIFA World Cup Qatar 2022. We believe the world will witness an amazing event just like they did at Qatar 2022 and we can’t wait to host the stars, he added.

The Qatar TotalEnergies Open 2023 is the 21st edition of the annual tennis tournament that has grown to become one of the main signature events on the Qatar sporting calendar.