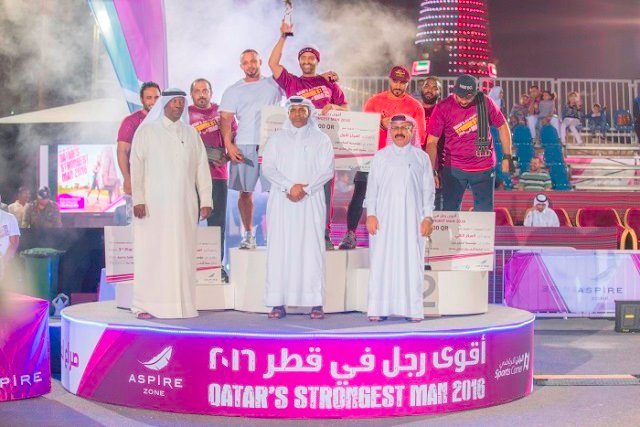 In the expatriates’ category, Kenyan contestant Cristopher Oketch secured a well-deserved win after a remarkable show of strength in the truck pulling challenge.

The competition attracted unprecedented numbers of spectators from the local community, with more than 1,500 people cheering on the contestants from the stands during what has become one of Qatar’s most popular events.
Designed as the ultimate test of strength and endurance, competitors had to complete a number of intense challenges that included lifting cars, heavy weights and sand bags, flipping giant wheels and truck pulling.

Abdullah Al-Khater, Events Manager at Aspire Zone Foundation, said: “We’re thrilled to see such big turnout from the local community for this year’s competition. Its success during these past few years has been supported by Aspire Zone’s logistical capabilities and its growing popularity is a further testament to the fact that Aspire Zone offers something for everyone. Qatar’s Strongest Man is yet another success for Aspire Zone Foundation, which aims to promote sporting activities and encourage the public to maintain a healthier lifestyle by hosting year-round sporting events. We congratulate the winners and thank all participants and spectators for making this year’s event such a success.”

Fahad Al Haddad winning consequently in second year said “This year’s edition was far more challenging than previous ones, and I’m very proud of myself for winning a second time. The atmosphere inside the arena was incredible and the support and encouragement from the spectators really helped us to keep going. Aspire Zone Foundation has done a remarkable job every step of the way and I look forward to taking part again next year.”

Kenyan participant Cristopher Oketch, winner in the expatriate category said “This year’s event was definitely a tougher challenge for me compared with previous years as I was expected to defend my victory in 2014’s contest. I’m very happy with the win and I attribute my success to the great support I received from the coaches, organisers, family, friends and the amazing spectators who cheered us all.”

Second place winner, Ricardo Ferreira, Portuguese national said on the occasion “This year is the first time I’ve taken part. I trained very hard for the competition so coming in second place is a great achievement for me. I plan to compete again next year and hopefully improve my result. I’ll be sure to work on my technique and prepare myself even better, particularly in the truck pulling challenge which was definitely the hardest event for all of us. Aspire Zone has done a great job with this competition, and I look forward to participating again next year.”

Third place winner, Mohammed Duwaidar, Egyptian national said “I’m thrilled to have won third place in this amazing competition. The cheering and support from all the spectators encouraged us to give our very best. I plan to adapt my training and work even harder in my preparations for next year’s event.”

This year’s event was attended by a large number of local, regional and international media outlets, including nine broadcast channels along with representatives from a number of online and print media outlets, who were there to cover the event from its start at 3:00 pm until the awarding ceremony at 8:30 pm.

Running alongside the competition, Aspire Zone Foundation organised a two-day series of community activities for all family members that included demonstrations of You.fo, an innovative sports game based on throwing an aerodynamic ring with a specially designed stick, sports activities for kids including mini football matches and tug of war games.

There were also a range of stalls selling food and souvenirs.

Families attending the event thanked Aspire Zone Foundation for providing a series of activities year-round for all community members to enjoy.