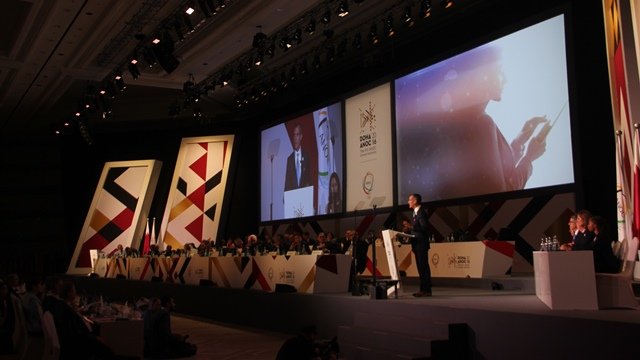 Los Angeles, Paris and Budapest presented their proposals before the 21st general assembly of the Association of the National Olympic Committees (ANOC), today held in Doha.

Eric Garcetti, Mayor of Los Angeles and head of the delegation mentioned said city has the ability to stage the best ever Games along with witnessing lot of new innovations. Presentation was made under the theme ‘Follow the Sun’, it will be third Olympics after 1932 and 1984, if LA is selected for 2024 games.

Among presenters included renowned Olympians told that Los Angeles is the best choice because of its infrastructure and huge capacities, and mainly the accommodation for athletes. They told that the City has dedicated $2 billion to establish a new stadium and the Olympic village at the campus of the University of California besides pledging $250 million to fulfill the city’s commitments in case it won the bidding process. will provide athletes with the best accommodation. And the sporting facilities will create a sustainable heritage for all games after the Olympics.

Budapest in it’s presentation stressed to give chance to mid-size cities like Budapest for hosting the Olympic Games and not only mega-cities to be considered, Balazs Furjes, Budapest Bid leader said.

“The Agenda 2020 reforms make it possible for a new generation of mid-sized cities to host the Games, creating new possibilities for the Olympic Movement that will reinforce the IOC’s modern agenda. “A Budapest Games would give hope to new nations and new cities, nations and cities on the rise. It would spread the reach of the Olympic Movement and create new possibilities that will take forward the IOC’s new agenda. “Today, our region offers financial resilience and stability, containing the most reliable economies in the European Union – among them Hungary. Budapest is on the rise and ready to deliver – we are the right city at the right time,” Furjes added.

Budapest is a founding nation of the Olympic movement and to host the first modern Games in 1896. it has lost five times it’s bid for holding the games in 1916, 1920, 1936, 1944, and 1960. . “The experience will be truly new and unique,” Attila Mizser, bid’s director of sports and venues said. “The whole city is one single connected Olympic Park. A genuine compact games experience built into the fabric of the city and accessible to all. A city wide celebration of sport,” he added.

“Paris is a confident city, which is not afraid to invent the future. Our vision for 2024 is optimistic, inclusive, joyful – but also clear-sighted and determined’, Denis Masseglia President, French National Olympic Committee (NOC) told during its bid today at Doha General Assembly meet. ‘In 2024 at Paris, we will swim in the River Seine, We will travel in driverless vehicles. We will celebrate the Games on the Champs Elysees, with the Eiffel Tower and all along the Seine from the Grand Palais to Saint Denis,” Hidalgo said. “a bid inspired by Olympic values, led by sport and athletes and powered by the collective energy and will of France’s national sports movement;, he said. ‘It is this energy that we will put at your service at Paris 2024, which will allow us to respond to your needs and those of your athletes, and which today sees us launch the Paris 2024 ‘NOC and NPC Declaration.’ It sets out the outstanding service you will receive. And together, in partnership with you, we want to develop these ideas further and so make 2024 an exceptional experience for each of you,’ Masseglia added.

Paris has participated in bidding four times during last quarter century (1992, 2008 and 2012), however, city has hosted the games in 1900 and 1924. Mayor Anne Hidalgo said that it is only sports that brings humanity near to each other. ‘You are all important actors in meeting the challenges that face the world’s future, and you have demonstrated this clearly, in the eyes of the world, with Agenda 2020.’ “Respecting the planet, fighting for development, creating opportunities for young people, supporting gender equality through sport and especially through the Games, which unite humankind in a way that nothing else can’.

Tony Estanguet, Paris 2024 bid’s co-chair, Olympic medalist and IOC member, spoke about the passion and legacy that, he said, will be a key driver in the French proposal. “I’m convinced that passion and purpose must remain central to our Movement for its future success. And why Paris 2024 is built on those two key pillars: passion and purpose.

“I hope there can be no question about French passion, especially for sport. Olympism is in our DNA. Every Olympic and Paralympic sport has a vibrant community in our country. Since 2010, we have staged more than 40 sold out, international events in Olympic sports,” said Estanguet. Should it be voted to host the 2024 Olympic Games, Paris will be the second city, after London, to host the event three times.