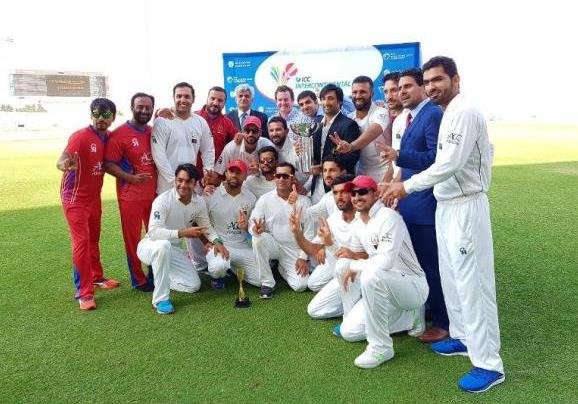 After the seventh and last round of matches of the four-day competition Afghanistan finished on top of the eight-team table with 121 points, while Ireland had to settle for the second spot with 109 points.

The two-and half year first-class competition that began in 2015, has provided four-day competition to the eight participating teams.

Afghanistan bowler, Rashid Khan was delighted with the victory, in which Afghanistan captured the title for the second time, by storming to victory over the UAE by 10 wickets claiming the title by 12 points.

“Winning the ICC Intercontinental Cup for the second time is wonderful and being unbeaten is fantastic. We worked hard and this match was really challenging for us, we have learnt a lot from the competition,” said Rashid.

Centuries from Ihsanullah (124), the captain Asghar Stanikzai (114) and Rahmat Shah (103) contributed to a huge first innings total of 510 runs for nine wickets as Afghanistan declared.

The UAE could only amass a first innings total of 197 runs all out with Shaiman Anwar (85) as the top scorer. Zahir Khan three wickets for 30 runs and Rashid Khan’s three wickets for 69 runs ensured Afghanistan enforced the follow-on.

Rashid Khan’s bowling display of five for 83 runs, even with Chirag Suri (81) and Rohan Mustafa (68) contributions meant Afghanistan would only need to score 19 runs for victory, after they bowled out UAE for 331 all out.

Javed Ahmadi (2) and Ihsnaullah (18) scored the winning runs in 5.3 overs as Afghanistan claimed the title.

Ireland did as much as they could do defeating Scotland by 203 runs in three days in Dubai, to put the pressure on Afghanistan.

Batting first Ireland scored 251 all out, with Kevin O’Brien top scoring with 78 runs not out. For the Scottish bowlers Christopher Sole (3-79), Stuart Whittingham (3-23) and Mark Watt (3-60) shared three wickets apiece.

Scotland’s reply was dominated by an excellent bowling display from the Irish bowlers. Boyd Rankin (4-45), Kevin O’Brien (3-14) and Tim Murtagh (2-24) restricted Scotland to 141 all out, with top scores from opener George Munsey (38) and Saryaan Sharif (26 not out). Ireland continued to put on the pressure in their second innings, Simi Singh (59) and Gary Wilson (56) leading the way and building the Irish total to 271 all out.

Scotland’s attempts to take something from the match with a target of 382 runs quickly diminished as wickets fell. Mark Watt’s quick fire 43 runs from 61 balls was the highlight of the Scottish innings, as Peter Chase who achieved figures of four wickets for 52 runs guaranteed the Irish win. Scotland finished in sixth place with 46 points.

Netherlands secured a third place finish in the competition with 72 points after defeating Namibia by 231 runs at the ICC Academy in Dubai. The Netherlands batters Roelof van der Merwe 175 runs from 193 balls and Michael O’Dowd 126 runs from 225 balls put on a stunning partnership building the Dutch’s first innings score to 501 runs for eight wickets as they declared. Namibia’s Craig Williams figures of four wickets for 71 runs was the standout bowling performance.

In reply Stephan Baard (111) got Namibia off to a good start, but Van der Merwe (3-50) again made an impact, but with the ball this time. Zane Green was the next highest scorer with 20 runs, Netherlands Vivian Kingma finished with three wickets for 22 runs.

Netherlands built on their first innings with Peter Borren (85) and Bas de Leede (56 not out) declaring on 223 runs for five wickets. Namibia’s target was set at 522 runs, Shane Snater’s five for 88, diminished any hope for the African team, with Netherlands winning by 231 runs. Namibia finished the competition in eighth place on 27 points.

Hong Kong finished in fourth place on 59 points after convincingly beat PNG by an innings and 29 runs in Sharjah. Totaling a first innings score of 237 all out, PNG opener Tony Ura posted 62 runs. Hong Kong’s Nadeem Ahmed five for 72 runs was the outstanding bowling display.

In reply, captain Babar Hayat magnificent 214 not out which included 27 fours and 6 sixes was the foundation of Hong Kong’s 348 all out. PNG were bowled out for 82 in their second innings by the bowling partnership of Ehsan Khan (five for 13) and Nadeem Ahmed (4-43). PNG finished the competition in seventh place with 43 points.