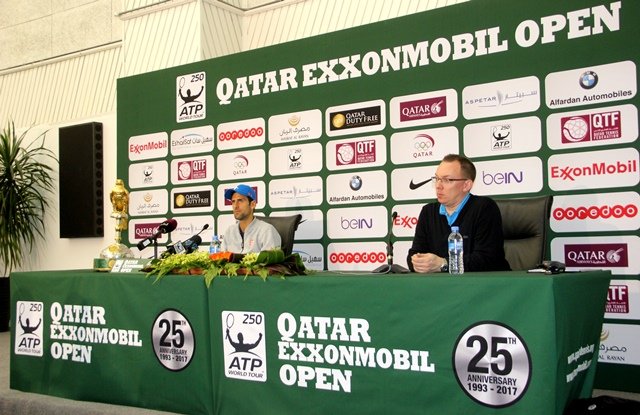 Novak Djokovic has taken the first battle of the 2017 ATP World Tour season against Andy Murray, beating the Scot 6-3, 5-7, 6-4 to defend his Qatar ExxonMobil Open title and exact revenge on the World No. 1.

In an electrifying final, the Serbian captured his first title since July (Rogers Cup) and showed some of the fiery tennis that helped him dominate the first half of 2016. The 29 year old frequently encouraged the crowd to back him, lifting his arms and pumping his fist while staring into the stands.

“Best scenario I could ask for at the beginning of the season. Playing all five matches in this tournament and then three hours against No. 1 of the world, biggest rival, and winning in a thrilling marathon match,” Djokovic said. “It was a really, really thrilling performance from both of us. Just a great way to start the year.”

Djokovic’s intense attitude was matched by his aggressive on-court play. He charged the net 35 times against Murray, winning almost 70 per cent of those points during the two-hour and 54-minute final. “You have to construct the point well and find the right time to approach, but you need to come in,” Djokovic said. “That controlled, aggressive style of play is the way to win.”

But Murray displayed his own brand of competitive tennis, especially when Djokovic was trying to serve out the match during the second set. The Serbian had three championship points while serving at 5-4 but Murray erased them all and won the next two games to force a decider. As Djokovic had done earlier in the match, Murray invited the crowd to support him.

The break at 5-4 extended Murray’s remarkable service break streak. The Scot has now broken his opponent in 112 consecutive matches. The last time Murray didn’t earn a break was during the 2015 Cincinnati semi-finals against Roger Federer.

Djokovic converted in the deciding set, though. He broke Murray to love for a 4-3 lead and served out the match, coming through on his fourth championship point.

The Djokovic win ends Murray’s 28-match win streak, which dated back to September when he lost to Juan Martin del Potro in Davis Cup action. That streak featured five consecutive titles, including November’s ATP Finals crown when Murray beat Djokovic for the season-ending title and the year-end No. 1 Emirates ATP Ranking.

The win improves Djokovic’s record in their FedEx ATP Head2Head rivalry to 25-11 and gives the Serbian his 67th career tour-level title. He is now 20-0 when winning the first set against Murray. It was a back-and-forth battle, though. Djokovic started off strong, stepping in front of the baseline and making Murray chase balls from sideline to sideline. Serving for the set, the Belgrade native held to love and pumped his fist after taking a one-set lead.

The second set was on serve until 3-3, when Djokovic rolled his ankle and hit his head on the hard court, lying on the ground for a few moments. Murray walked over to his side of the net to check on him, and the brief interruption seemed to throw the Scot off. He double faulted twice, including on break point, and Djokovic led 4-3. Murray bounced back, though, to erase the championship points and even the match.

Murray talking to media said “Obviously disappointed not to win tonight, but I played pretty good the last couple of matches.”

“I think physically it was a good test to start the year, and I did good there,” World No. 1 Andy Murray said in post match press conference at the Khalifa Int’l Tennis & Squash Stadium, Doha.

While receiving his Champion Trophy of 2017, Djokovic thanked Emir of State of Qatar present on the occasion for His Highness encouragement and patronage to the sports, he thanked the audience for their support to both the players equally and enjoying the game.

Djokovic lauded highly skilled and superb game of his rival since their age 11 years old Andy Murray. Both have fought 35 top world competitions ‘ we have been together long years world-wide in top competitions ‘, he said about his close friend out side the court.