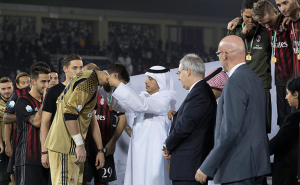 AC Milan beat Juventus in a penalty shootout 4-3, after a 1-1 draw Friday evening at Jassim Bin Hamad Stadium, Doha to lift their third domestic trophy this year after the Serie A league and Italian cup titles clinched in May.

Milan, who played the game as Italian cup finalists, struggled at the start and fell behind to a Giorgio Chiellini deflection, but leveled with a Giacomo Bonaventura header before half-time and saw substitute Mario Pasalic net the crucial spot kick.

Sheikh Abdullah bin Nasser bin Khalifa Al-Thani, Prime Minister and Minister of Interior also attended the final of the Italian Super Cup. Among spectators present were a number of Sheikhs, ministers and guests along with large audience of fans of two clubs .

Italian Super Cup finalists, Juventus breaks for a taste of authentic Qatari hospitality while training for the decisive match scheduled to take place this Friday at Al-Sadd Stadium.

The match between AC Milan and Juventus will mark the second time that the Italian Super Cup will be played in the Qatari capital after Juventus took on Napoli at the same stadium in 2014.

In a press release issued by Qatar Tourism Authority (QTA), it says that ‘ is working closely with its public and private sector partners to attract world-class competitions and thereby international sports tourists to Qatar.

QTA announced eralier that over 3,000 tickets are sold to international fans.

Earlier this month, QTA partnered with Qatar Airways to host the Match of Champions attracting over 5,000 international visitors and generating an estimated QAR 9.6 million.

Rashed Al Qurese, Chief Marketing and Promotion Officer at Qatar Tourism Authority said “The return of Supercoppa Italiana, one of European football’s most important games of the year to Qatar is testament to the country’s growing strength as a destination for global sporting events.’

‘We are pleased to join hands with our partners at QFA to build on this strength to attract international sports tourists to visit Qatar. This historic match, together with the attractive travel, ticket and accommodation packages provided for international fans of both teams, promise an unforgettable experience for Qatar’s visitors this week.’