HMC Qatar Observes World Cancer Day, ‘We Can, I Can’ 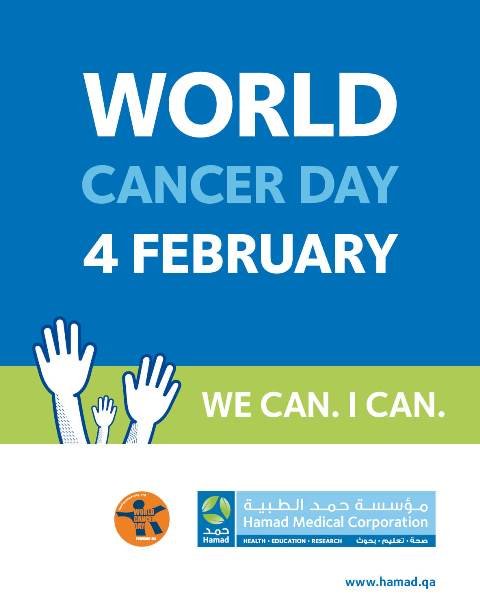 To show solidarity with the anniversary of World campaign on Cancer, Hamad Medical Corporation (HMC) held general public program in order to save lives and reduce the number of deaths caused each year due to the disease.

World Cancer Day takes place on 4th February each year to unite individuals across the world under the shared cause of tackling cancer. Under this year’s tagline – ‘We can. I can’, HMC is drawing attention to what can be done to address cancer and lessen its devastating impact. The aim is to prevent cancer and avoidable deaths and suffering.

According to Qatar’s 2014 Population Health Report, cancer was the second leading cause of death in the country between 2004 and 2010. The report also states that the majority of Qatar’s residents will be, either directly or indirectly, affected by cancer.

Similarly, the World Health Organization’s 2014 Population Health Report identified that cancer was responsible for 18 percent of all deaths in Qatar compared to 10 percent in 2010. The report added that after cardiovascular disease, cancer was the second leading cause of death from a non-communicable disease.

The most recent statistics from the Qatar National Cancer Registry show that in 2015 there were 1,465 documented patients newly diagnosed with cancer, of which 44 percent were female and 56 percent male.

Commenting on World Cancer Day 2017, Professor Karl Alexander Knuth, Medical Director and Chief Executive Officer of HMC’s National Center for Cancer Care and Research (NCCCR) and Chairman of Cancer Services at HMC said: “We have made great progress in the fight against cancer in Qatar. The National Cancer Strategy has guided us to reduce the impact of this overwhelming disease and build on previous achievements to ensure the well-being of Qatar’s population.”

“Our cancer services are benchmarked against best international practice and recognized by international research study groups. Educating people and broadening their understanding is vital for the future of cancer prevention, early detection and treatment. This is also an efficient weapon in dispelling the many myths and misconceptions about cancer that can adversely affect people’s attitude to accessing early diagnosis, treatment and care,” he stressed.

Professor Knuth said “We support WCD’s efforts in striving for positive and radical change. This is our chance to encourage people to take action for themselves, their family, their community and their country. Everyone can make a difference and inspire others. ‘We can. I can’ beat cancer, overcome its consequences and most importantly help prevent cancer.”

Dr. Mohammed Ussama Al Homsi, Senior Consultant in the Oncology Department at NCCCR noted that WCD presents an ideal opportunity to highlight the fact that together the world can make a difference. “WCD presents an excellent opportunity to raise awareness among the public of the importance of taking care of their health and being aware of the consequences of a lack of physical activity and poor nutrition. These factors are all associated with excess body fat and can increase the risk of developing certain cancers and other health illnesses such as cardiovascular diseases, Type 2 diabetes and obesity,” he noted.

Dr. Al Homsi said “These health implications, especially the risk of developing cancer, can be reduced by following healthy lifestyle habits such as not smoking, preventing ultraviolet (UV) exposure from the sun, consuming a healthy diet and exercising regularly.”

Stressing the importance of prevention, Ms. Catherine Anne Gillespie, Executive Director of Nursing at NCCCR said “Equipping individuals and communities with appropriate and adequate knowledge about the strong relationship between lifestyle and cancer can empower people to make informed choices and adopt a healthy lifestyle. As a result, it is important to spread the word that most cancers can be prevented by adopting healthy behaviors.”