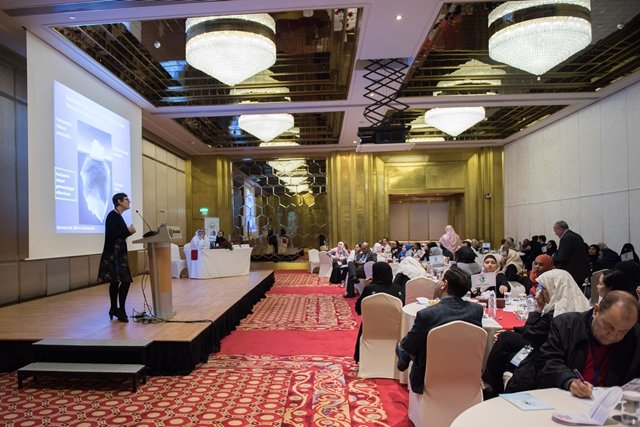 The Dietetics Department in collaboration with the Pediatrics Department at Hamad Medical Corporation (HMC) recently organized the ‘First Pediatric Medical Nutrition Symposium’ to raise awareness amongst dietitians and pediatricians of the importance of dietetics, the diseases and disorders associated with pediatric nutrition, and appropriate feeding methodologies.

Ms. Reem Al Saadi, Head of HMC’s Dietetics Department, stated that the symposium featured a training workshop and some case study activities. “Topics such as allergies to cow’s milk and esophageal reflux in pediatric patients were discussed. The symposium also focused on the percutaneous endoscopic gastrostomy (PEG) feeding tube method used for children with special needs who suffer muscle atrophies and swallowing difficulties,” she said.

“Behavioral issues in children with nutritional risks were also discussed. Speakers at the symposium reiterated the importance of teamwork through the collaborative efforts of dietitians, doctors, nurses, and other healthcare professionals as central to the success of nutritional care plans,” Ms. Al Saadi added.

Dr. Ahmad Al Hammadi, Senior Consultant and Chairman of HMC’s Pediatrics Department indicated that allergies to cow’s milk are common among infants and toddlers with a prevalence rate of two to four percent in children younger than one year of age.

He stressed the importance of an early diagnosis of an allergy to cow’s milk, which is characterized by symptoms such as a rash, vomiting, diarrhea, and chest wheezing. “These symptoms may appear immediately after ingesting cow’s milk or 72 hours after ingestion. This disorder may recede once the allergic child reaches the age of five,” he explained.

“A cows’ milk or baby formula allergy is sometimes accompanied by other types of allergies such as gluten, cereal and nut allergies. Results of allergy tests, body weight and height, and family history must also be taken into account to reach a precise diagnosis,” Dr. Al Hammadi pointed out.

Children diagnosed with a formula allergy are put on medicated formula at Hamad General Hospital. Dietitians at the hospital place these children under observation and follow-up, and prescribe the appropriate diet for them.

Dr. Al Hammadi advised parents to watch their children’s weight as a low body mass index, especially within the first two years of age, may sometimes be a sign of health problems such as cardiovascular disease, metabolic disorders, or malnutrition. He called on parents to ensure they provide their children with balanced diets. However, he said parents should never force their children to eat but rather encourage them.