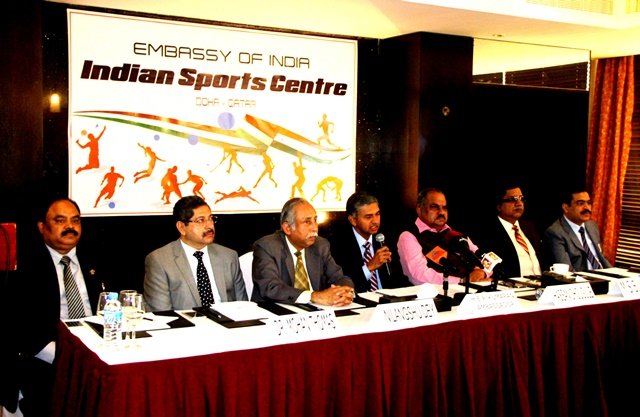 Ambassador of India to State of Qatar, P. Kumaran formally announced the setting up of Indian Sports Centre (ISC) in Doha. Addressing to media this morning, Indian envoy highlighted about the initiative of Doha based prominent members of Indian community for promoting sports activities among Indian youth and the workers in Qatar. He said that ISC will be launched officially on Qatar Sports Day, i.e. second Tuesday of February 2017.

‘ISC would function as the fourth apex body after ICC, ICBF and IBPN with the focus on all aspects relating to promotion of various sports and games along with to support various initiatives by the host country of Qatar.’ ambassador P. Kumaran said.

‘We are already in contact with Supreme Committee for Delivery & Legacy and other sports federations in Qatar’, Nilangshu Dev, President of newly formed ISC announced on the occasion. He said that the mission of Sports Body is to develop the youngsters in sports and games through professional coaching in mainly 10 games including Football, Cricket, Hockey, Volleyball, Basketball, Handball, Athletics, Aqua-sports like water polo, Yoga and Badminton.

Hassan Chougule, Chairman, Operations & Public Relations of ISC said ‘all Indian nationals and Indians by origin will be entitled for the facilities under ISC. He told that there are various types of memberships such as Life Member, Corporate Member, Annual Member and Ordinary Membership. He explained that Ordinary membership has no voting rights. He stressed on the importance of development of sports environment among the Indian expatriate community.

Dr. Mohan Thomas, Chairman, Govt. Relations & Premises Development in his remarks said that Indian community is the largest community in Qatar. Under ISC, it will support FIFA 2022 and all other international sports events being organised in Qatar. He said under ISC, a purpose built premises are planned to build for providing Volleyball, Basketball, Badminton, Swimming and other Indoor games to the members.

M. S. Bukhari, Chairman, Corporate & Business Development Committee stressed on the involvement of workers and blue collar Indian nationals towards sports. ‘ India is a large country worldwide, however, we are not producing according to the size of population in area of sports’. ‘ Who knows that our hidden talents among working class in Qatar may bring international medals in sports for our country’, Bukahri said that option of Corporate membership will help companies to involve their staff / workers in various sporting activities. In this regard, program has been designed and planned’, he told members of media.

Azim Abbas, Chairman, Patron Council said that on official launching day, Run For Sports will be held on Doha Corniche subject to necessary permissions required in this regard. He said that to show our solidarity with Qatar on their Sports Day, around 3,000 students from Indian 14 schools in Qatar and large community members led by sports celebrities from India and Qatar are planned for participation.

Azim Abbas announced for ISC Logo Design & Caption competition open for all communities living in Qatar till 17 January from today. A cash reward of QAR 1,000 will be given to the best design winner.

Habibun Nabi, General Secretary ISC paid his thanks to all print and electronic media for their support.