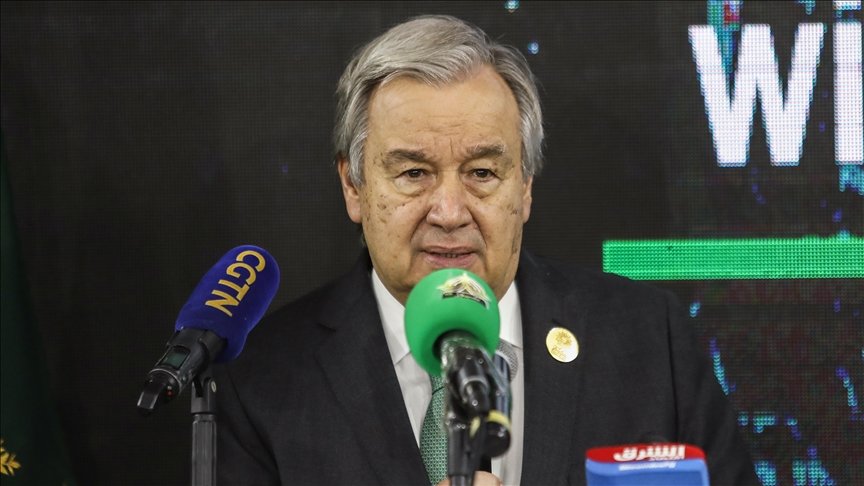 Speaking at the UN climate summit COP27 in Egypt’s seaside city of Sharm el-Sheikh, Guterres said the plan calls for initial new targeted investments of $ 3.1 billion between 2023 and 2027 – roughly six percent of the requested $50 billion in adaptation financing.

“Vulnerable communities in climate hotspots are being blindsided by cascading climate disasters without any means of prior alert,” Guterres said.

“Countries with limited early warning coverage have disaster mortality eight times higher than countries with high coverage.  The Action Plan launched today sets out the way forward to right this wrong, and protect lives and livelihoods.”

The early warning system would allow communities hazardous climate-related events and would reduce by 30% the damages from extreme climate changes.

“People in Africa, South Asia, South and Central America, and the inhabitants of small island states are 15 times more likely to die from climate disasters. These disasters displace three times more people than war. And the situation is getting worse.” Guterres said.

Egypt is currently hosting COP27, with more than 100 leaders and heads of states attending the global event to discuss ways to lessen the negative impacts of climate change and adapting to its repercussions.

Dozens of presidents and prime ministers spoke on Monday at a global summit on climate change after the United Nations chief opened the day’s session with a warning that the world was “on a highway to climate hell with our foot on the accelerator.”

The U.N. secretary general, António Guterres, set the tone for the annual United Nations-led international climate talks, which officially began on Sunday as the accumulating threats of war, warming and economic crisis take a toll on every continent, hitting the world’s most vulnerable people the hardest.

“We are in the fight of our lives, and we are losing,” Mr. Guterres said in opening remarks at the summit in the Red Sea resort of Sharm el Sheikh, Egypt. Dozens of world leaders delivered brief addresses at the event on Monday.

Later, the British prime minister, Rishi Sunak, told delegates the Russian invasion of Ukraine should prompt countries to invest more heavily in renewable energy. “Putin’s abhorrent war in Ukraine, and rising energy prices across the world, are not a reason to go slow on climate change,” Mr. Sunak said. “They are a reason to act faster.”

President Emmanuel Macron of France said the war in Ukraine should not change countries’ commitments to reduce greenhouse gas emissions.

The talks opened under the shadow of unsettling new data: The World Meteorological Organization said on Sunday that the planet had likely witnessed its warmest eight years on record, including every year since countries came together in 2015 to create the landmark Paris agreement that was aimed at pivoting the global economy away from fossil fuels and slowing down warming.

The biggest fault line of this year’s talks is the question of what rich, industrialized countries that account for the largest share of greenhouse gas emissions owe to those bearing the brunt of climate hazards. On that there was a small breakthrough on Sunday — progress on the contentious issue of who will pay for the irreversible damage that climate change is wreaking on the world’s most vulnerable.

Egypt is hosting the conference, and the government has tried to cast itself as a climate champion of the developing world. But those efforts have sometimes seemed at odds with the country’s troubling records on the environment and human rights. The most prominent political dissident in Egypt, Alaa Abd el-Fattah, who has spent more than 200 days on a hunger strike in an effort to pressure the authorities to let him go, vowed to begin a water strike as the summit began.

In addition, protests, which have been a feature of earlier COP summits, have been noticeably absent so far in Egypt, partly as a result of strict security measures and the remoteness of the conference site from major cities.

Even with protesters mostly absent from the streets, activists still seized on the opportunity to push governments to take tougher action against climate change. On Monday, environmental groups called for a ‘fossil fuel nonproliferation treaty’ that would ultimately put an end to to all new oil, gas and coal projects.

The climate talks are the 27th session of the Conference of Parties to the United Nations convention, which is why the event is known as COP27,  Over 44,000 people have registered to attend, including representatives of government, business and civil society groups.

The talks come at the end of a year that saw extraordinary heat waves across the northern hemisphere, catastrophic flooding in Pakistan and Nigeria, and a punishing drought in China.

According to a list posted by the United Nations, 110 heads of state and government are addressing the conference, a larger number than at many previous climate conferences. Of those, just seven are women.

She also restated a call for an overhaul of international development institutions like the World Bank.

“This world looks too much like it did when it was part of an imperialistic empire,” she said.