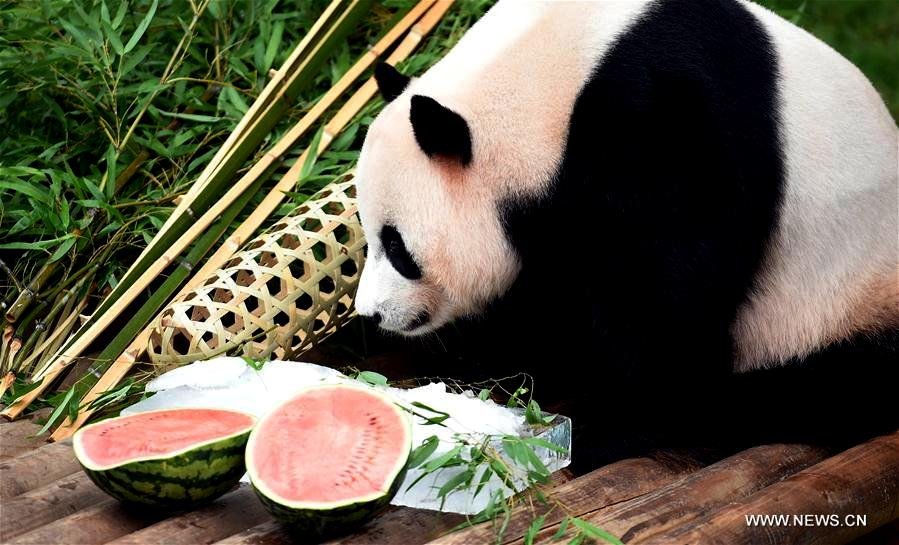 The birthday for one of a pair of giant pandas, leased by China, was celebrated Wednesday at the zoo of Everland, South Korea’s largest theme park located in Yongin, 40 km south of capital Seoul.

Le Bao, a five-year-old male, and Ai Bao, a four-year-old female, arrived in South Korea in March last year on a 15-year lease. Their names mean pleasant and lovely treasures.

Everland built a 3,300-square-meter Panda World to accommodate the endangered species. The panda species was under threat of extinction but gained great popularity for lovely looks and rarity in the world.

According to Everland data, the number of giant pandas in the wild increased to 1,864 in 2014 from 1,596 10 years ago thanks to much effort to conserve the bear species.

To congratulate Ai Bao’s birthday, the theme park operator displayed a birthday cake, made up of bunches of bamboo, flowers and candle-shaped carrots, at the center of the female panda’s pen.
Scores of local and foreign media journalists participated in the celebratory event to photograph and film the lovely pandas.

Ai Bao, which Everland said is gentle and shy, lied on her belly at the cooled rock, which is specially produced to mechanically lower its temperature and is located at the corner of the pen.

Just on the opposite of the pen, Le Bao actively went here and there throughout his pen. The male panda, one-year older than the female one, climbed the trees and ran from place to place.

The outgoing Le Bao caught the eyes of female students visiting the Panda World, who said he was “cute and lovely.” Many of mothers wheeling a baby carriage stopped in front of the male panda to allow their children to watch the lovely panda.

“About one and a half (years) has passed since the pandas came to their new home,” said Kang Cherwon, a keeper of the Everland zoo.

“They put on some 25 kilograms in weight since they came here, and became an adult capable of reproducing,” said the keeper.

Female pandas aged 5-6 are able to start reproducing. Le Bao and Ai Bao are selected as a good genetic match, but the reproduction is usually hard as the breeding season of pandas lasts just for days per year.

“The breeding season only lasts for two to three days in a year,” said Youn Soonghee, an Everland zoo breeder of the pandas.

Youn anticipated the reproduction next year, but he said getting pregnant could be hard. He added that the pandas should pass this summer well as being healthy is important to reproduce.