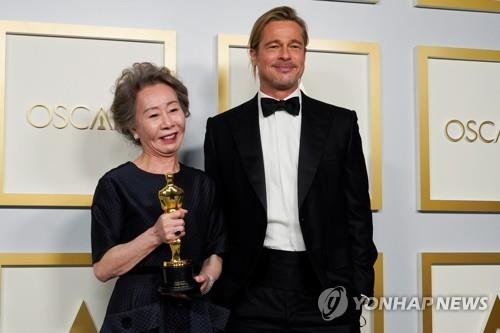 South Korean actress Youn Yuh-jung has won best supporting actress at this year’s Academy Awards for her performance in the immigrant film “Minari,” becoming the first South Korean to win an acting Oscar.

After taking the stage for an acceptance speech, Youn first greeted Brad Pitt, the winner of best supporting actor last year, who called her name.

“Mr. Brad Pitt, nice to meet you finally,” she told the actor in English, who is also the founder and owner of Plan B, the production company behind “Minari.” “Where were you while we were filming?” And she went on to express gratitude to her fellow cast.

“Thank you. Tremendous thanks to the academy members who voted for me,” she said. “Thank you, wonderful ‘Minari’ family, Steven (Yeun), (Lee) Isaac (Chung), (Han) Yeri, Noel (Kate Cho) and Alan (Kim). We became a family.”

She said she cannot believe that she is accepting an Oscar as she has watched the Academy Awards on TV for decades in Korea.

She also gave special thanks to director Chung, who wrote his fourth feature “Minari” based on his childhood memories and was nominated for best director and best original screenplay this year.

“Most of all, above all, (I want to thank) Lee Isaac Chung. Without him, I couldn’t be here,” she said. “He was our captain, and my director. Tremendous thanks to you.”

The 73-year-old Korean actress said her honor is the result of “American hospitality” for a Korean actor, and she wants to share the glory with the four other nominees.

“I’d like to dedicate this award to my first director, Kim Ki-young, who was a very genius director. I made my first movie with him,” she said. “He would be very happy if he is still alive.”

It is the first time for a South Korean to clinch an Oscar in an acting category. Last year’s best picture winner “Parasite” had no acting nominees even though it had an overall six nominations, including best director and original screenplay for Bong Joon-ho.

Youn is also the third oldest supporting actress award recipient after 77-year-old Peggy Ashcroft for “A Passage to India” in 1985 and 74-year-old Josephine Hull for “Harvey” in 1951.