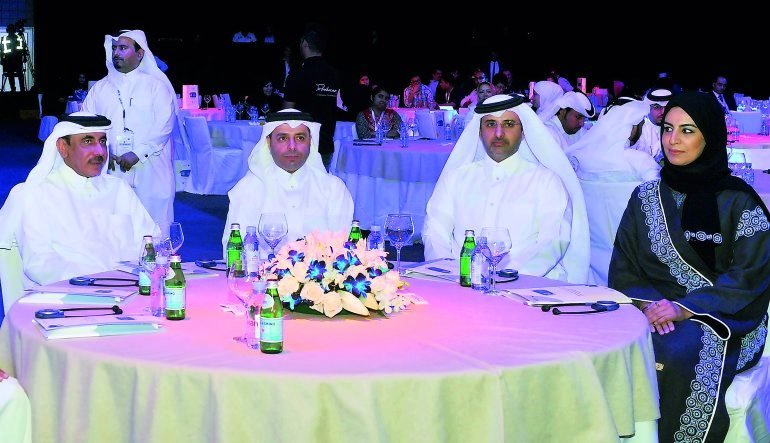 Present on the were Dr Mohammed Abdul Wahed Ali Al Hammadi, Minister of Education and Higher Education, David Dikter, CEO ATIA, US and Maha Al Mansouri, CEO of MADA. Four days conference and exhibition is organised by Doha based MADA and ATIA (US) as part of ATIA Annual Conference 2018.

Main objective of the conference is to highlight necessity of Computer Technology and Assistive Technology (AT) for educating special needs children in the Gulf Region.

Four experts from US are specially invited to address the participants during conference along with experts from Qatar and the region.

Jassim bin Saif Al Sulaiti, Minister of Transport and Communications in his opening address said “This conference emphasises our commitment to provide a conformable life for people with disabilities and make them integrate into the community. In Qatar, we have implemented several remarkable initiatives to enhance lives of people with disabilities and it includes of launching the National Autism Plan and a drive to equip 53 school to facilitate students with autism.”

He told that at the Ministry of Transport and Communications, several initiatives have been taken to support people with disabilities including MADA. He stressed ‘We need to resort technology to the conventional methods as studies show the use of technology is more helpful for people with disabilities, and make the environment to be friendly and convenient for them.”

Maha Al Mansouri, CEO of MADA said “The conference is discussing about technology, best practices in Assistive Technology and how educational institutions can implement technology for special children. She paid her gratitude to government and related ministries for their full support, however, she stressed on private sector to play their role in the production of various technologies in Arabic language itself.

David Dikter, CEO Assistive Technology Industry Association, US (ATIA) talking with ‘asiantelegraphqatar.com’ said that since production cost of aids for special needy people is expensive and not required in large quantity which may generate higher revenue commercially, therefore, it is important that GCC states combine their resources in production of necessary tools and aids specially with Arabic language.

A number of MOU were also signed on the sidelines of the conference including MADA and Sharjah City for Humanitarian Services of UAE. Another MOU signed between MADA and ATIA (US)

Also several memorandums of understanding were signed between MADA and institutions in the field of communication, information technology and assistive technology, on sidelines of the conference. Agreements were signed with Sharjah City for Humanitarian Services from the United Arab Emirates and with the Assistive Technology Industry Association from the United States of America.

MADA and Ministry of Education and Higher Education will be signing an agreement on Wednesday to train 40 professionals from schools on how to use the technology to support students with disabilities.