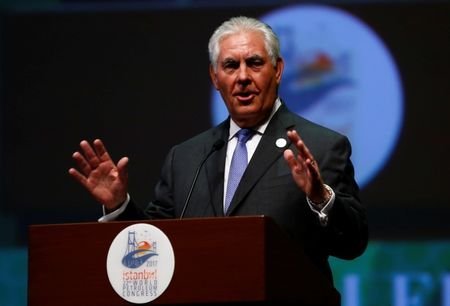 U.S. Secretary of State Rex Tillerson emphasized that strong Washington-Ankara ties are essential from security standpoint to economic opportunities, he was addressing today on the 2nd day of 22nd World Petroleum Conference which took off on Sunday in Istanbul.

Tillerson said, “While we still have a lot of challenges ahead of us, this is an extraordinarily important relationship to the United States for many, many reasons that you would well understand, from a security standpoint to future economic opportunities, as well. And important geography, just by luck of Mother Nature, that the citizens of Turkey occupy at this crossroads of the world.”

He said that he met President Recep Tayyip Erdogan on three different occasions and the United States and Turkey are “working very hard to rebuild that level of trust which is the basis for any relationship.”

“Our relationship in Turkey, which has been under some stress for some time, I hope we are beginning to put it on the mend. I’ve had now about six hours of meetings over three different occasions with President Erdogan, I think we are beginning to rebuild some of that trust that we lost in one another. They lost our trust, to a certain extent; we lost theirs,” said Tillerson.

Giving a closing remarks on the second day of the World Petroleum congress, Secretary of State said, “We must put the relationship on the mend, re-establish it on a proper basis, and then strengthen it, going forward. We’re making some progress down in Syria. We are hopeful that we can replicate that with Turkey on some areas in the northern part of Syria.”

At the high-level opening ceremony on Sunday, U.S. Secretary of State Rex Tillerson was honoured with a lifetime achievement award, the Dewhurst Award, for his exceptional contribution to the industry. Tillerson is the ex-chairman and former chief executive officer of Exxon Mobil Corp.

“Energy is fundamental to economic growth and prosperity, it’s fundamental to lifting people out of poverty the world over, that it requires massive investments over long periods of time and requires enormous risk-taking and risk management.”, Tillerson said in his speech upon receiving the award.

High-level executives from leading energy companies such as Shell, BP, ExxonMobil, Chevron, Total, Saudi Aramco, SOCAR and up to 50 energy ministers are attending the Congress with the theme, Bridges to our Energy Future.

World Petroleum Council president Jozsef Laszlo Toth has said that the global petroleum sector is facing growing challenges as the population has increased and economic development has brought about a large number of consumers into the market.

He was addressing the 22nd World Petroleum Congress (WPC) in Istanbul, Turkey.

Organization of the Petroleum Exporting Countries (OPEC) Secretary-General Mohammed Barkindo said that the member states of the bloc support the stance of the G-20 leaders who have pledged to fully implement the Paris Agreement on Climate Change.

Despite U.S. withdrawal, the other 19 members of the G-20 unanimously said the climate change deal is “irreversible” and OPEC supports this position, Barkindo said on the sidelines of the World Petroleum Congress.

All OPEC member countries have signed the agreement, Xinhua quoted him, as saying.

The 22nd World Petroleum Congress, which is the largest gathering for the oil and gas industry, began on Sunday in Istanbul with a view to addressing the challenges facing the sector will close on 13th of July 2017..