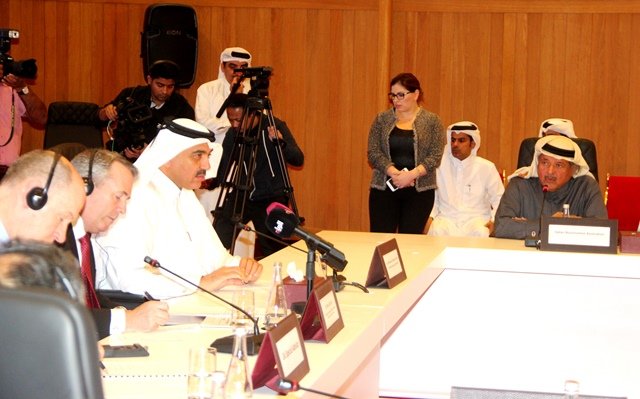 Members of Qatari business community and representatives of Public Sector commercial institutions today met visiting United Kingdom Secretary of State for Int’l Trade and President of the Board of Trade Liam Fox and his accompanied members of delegation.

Qatar Business & Investment Forum Meeting is scheduled to hold in London and Birmingham in March 2017. A preparatory meeting in this regard was held today at the Hotel Sheraton Grand Doha.

It is to note that bilateral trade between both the friendly countries Qatar and United Kingdom during 2016 was around 5.3 billion UK Pounds, 2.7 billion UK Pounds exports were from State of Qatar.

Mohammed bin Abdullah Al Rumaihi, Minister of Municipality and Environment and Chairman of the Organizing Committee of the Qatar Business and Investment Forum told in is opening remarks that Qatar has been organizing meetings over the past few years in a number of Western cities and capitals such as London, New York and Berlin. Next meeting is scheduled to hold in London followed by Qatari-British joint meeting following day in Birmingham, the UK’s second largest city, Al Rumaihi said.

He said that Qatar Business and Investment Forum sessions will focus on financial, energy, industry, infrastructure, tourism, transportation and information technology sectors. It will review important projects in sectors like trade, economic, investment and construction available for investment in Qatar and Britain.

He said that the forum will shed light on a number of projects and economic opportunities in Britain after Brexit and will seek to increase cooperation between the Qatari private sector and its British counterpart.

Minister of Municipality and Environment and Chairman of the Organizing Committee said that the Qatari delegation will travel on the second day of the forum to Birmingham, where the British side will present new investment opportunities in the Birmingham area and in north Britain.

QNA reports that AlRumaihi elaborated purpose of today’s meeting was to learn about the views of Qatari business community, Representatives of public sector, Banks and various business entities towards British partners, to get positive results in the forthcoming joint meeting in Birmingham.

Al Rumaihi said that there is a wide range of availability of opportunities for Qatari companies in sectors like industry, health and education in both private as well public sectors.

Liam Fox, UK’s Secretary of State for International Trade and President of the Board of Trade said on the occasion that trade and investment relations between Qatar and the UK have witnessed remarkable progress in recent years, stressing that the UK is keen to strengthen its partnership with Qatar.

British Minister lauded bilateral trade relations between both the countries and stress on holding regular meetings in Doha and London.

He said that post Brexit, it is important for UK to build it’s strong relations in various regions and to develop it’s business policies since exit of his country from the European Union will provide more freedom in promoting his country’s economy.

Fox told that UK is home of 20 leading global financial institutions offering Sharia-compliant products. He assured that margin of returns in investments in UK have been attractive for foreign investors. He invited Qatari business community to explore the opportunities available outside London in his country like of
Birmingham, an important industrial and economic city of UK where joint meeting is arranged. Birmingham is a major hub for British exports.

Members of Qatari business community lauded bilateral relations between Qatar and United Kingdom. However, a few concerns were raised by some of the business community members including over Taxation system, Visas for Qatari nationals, one sided investments and absence of major British business names from Qatari market. They also told lack of figures of volume of private sector investments from Qatar in the UK.

UK’s Secretary of State for Int’l Trade and President of the Board of Trade committed that he will bring in the knowledge of Immigration authorities on visa issue. He regretted on the un-availability of figures of private sector investments and regarded as ‘personal investments’.

UK Minister agreed and said that mutual relations are stronger and sustainable when both the countries investors and business community participate in each other countries.In regard to Taxation system, he blamed the lawyers un-ethical practice in the UK.