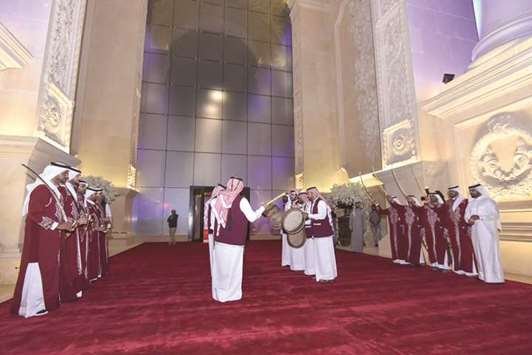 Sheikh Ahmed bin Jassim bin Mohamed al-Thani, Minister of Economy and Commerce of Qatar announced
today the launch of the second edition of Qatar Shopping Festival, which runs until February 7, 2018.

The minister said at a speech inaugurating the event that the leading status of the State of Qatar has transformed it into one of the top tourist destinations in the region, stressing that the sector continues to expand rapidly despite the unjust siege enforced by neighbouring countries.

The minister added that the siege had become an incentive to implement a number of projects and initiatives that
enhanced the contribution of the sector and contributed to diversifying the national economy. He noted that the shopping festival increases the direct impact of the tourism sector on the GDP by QR 1.6 bn.

The minister also discussed the plans for developing the sector and said the focus currently is on providing highly-profitable products and services that enhances the productivity of the sector and its growth for the coming years.

He added that there are also efforts to encourage the private sector to invest in the sector and to encourage state entities to engage in public-private partnerships.

An example of that was transforming Doha Exhibition and Convention Center into a modern entertainment city.
The minister highlighted that the state has implemented a number of projects to improve the quality of the tourism sector, giving an example of the establishment of Discover Qatar which facilitates travel to the country and provides more than 24 programmes for tourists. The minister also hailed the electronic visa application
system that was launched by the Ministry of Interior, Qatar Airways, and Qatar Tourism Authority
(QTA) in co-operation with VFS Global.

The minister said he expects the service to facilitate the process of visiting the country by providing a more transparent system and added that activating the transit system and providing free transit visa to cruise tourists had a positive impact on the number of tourists visiting the State of Qatar. The minister also added that the number of cruise ships visiting Doha port in the 2016/2017 season rose to 27, compared with 12 in the previous
season.

QTA forecasts the number of people visiting aboard those ships for the year 2018/2019 to be 200,000 passengers.
The theme of this year’s shopping festival is Brand New Tradition. A total of 13 shopping malls will take part this year. The sales will include a wide selection of products such as clothing,
electronics, beauty products,
and others.