Qatar To Invest $ 6.28 Billion In Britain Over Next 5 Years 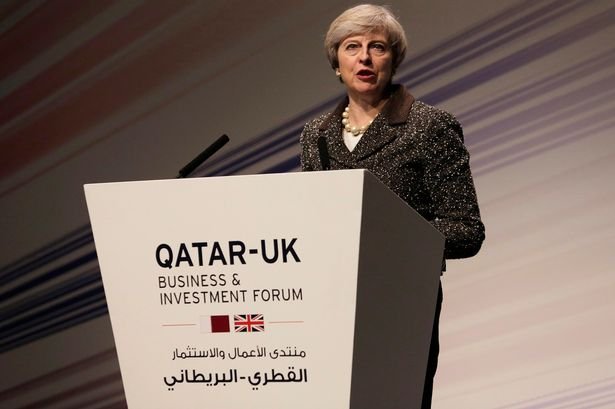 Britain is establishing a joint economic and trade committee to pave the way for a post-Brexit trade agreement with Gulf states, Prime Minister Theresa May said, as her government announced that Qatar has pledged to invest $6.28 bn in the country.

May, who is due to begin the formal process of leaving the European Union, said on Tuesday that Britain was seeking to deepen its relationship with Qatar in areas including defence, education, healthcare, energy and financial services.

“I’m delighted that we are also establishing a new joint economic and trade committee,” she told a Qatar-UK investment conference in Birmingham, central England.

She is due to meet Qatari investors later on Tuesday.

Qatari Prime Minister Sheikh Abdullah Bin Nasser al-Thani told the conference that the planned $6.26bn of investment would be across all parts of the country, including Scotland.

“Qatar’s emir has given a strong vote of confidence and faith in our economy,” he said.

Al Jazeera’s Mohammed Jamjoom, reporting from Birmingham, said that despite Brexit, Qatar is delivering a message that Britain will continue to be a primary business destination.

“Business ties between Qatar and the UK have been long established. So it is really not a surprise that they will continue to investment more. What is interesting is that Qatar is expressing such confidence at a time when there is less confidence as to how the British economy will perform going forward,” he said.

The Gulf state currently has about $50bn worth of investments in Britain and delivers 90 percent of Britain’s imports of liquefied natural gas.

Qatar sees Britain’s exit from the European Union as an opportunity to boost supplies of liquefied natural gas to the world’s fifth-largest economy and is open to investing in British energy assets, Qatar’s energy minister said.

“The UK will have a new era post-Brexit … The negotiations will start among Europeans and nobody is extremely clear about where the negotiations will lead to,” Energy Minister Mohammed bin Saleh al-Sada said in an interview with the Reuters news agency late on Monday.

Britain started receiving LNG from Qatar in 2008 via ships that dock at South Hook, in Kent, one of Europe’s largest LNG terminals, which is owned by Qatar.

Like other Gulf economies, Qatar is trying to restructure its economy to rely less on hydrocarbons. It faces rising competition in Asia from other LNG producers as new projects in the US and Australia come online in the next few years, and Doha has said it will focus on expanding contracts in Europe.