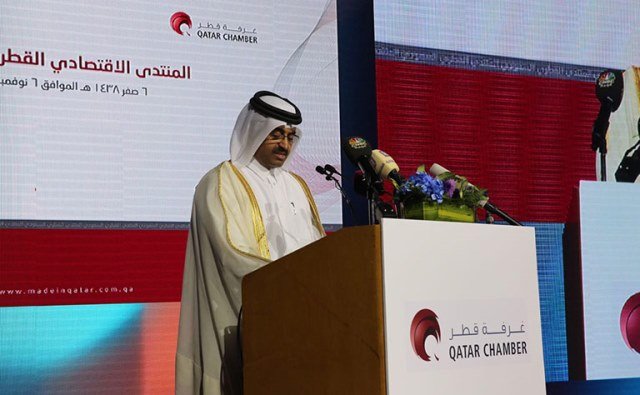 The Qatari- Saudi Economic Forum kicked off Sunday, on the sidelines of the “Made in Qatar” exhibition which will begin Sunday evening and continue until Wednesday Riyadh International Convention & Exhibition Center.

In his opening remarks, Dr Mohammed bin Saleh Al Sada thanked the Kingdom of Saudi Arabia for hosting the Qatari-Saudi Economic Forum and Made in Qatar Exhibition, pointing to the importance of the Forum in meeting the aspirations of the GCC citizens who hope to see GCC bloc as an active and influential economic power both regionally and internationally.

He stressed the need to rely on diversified resources to advance the GCC economy in light of falling oil prices, pointing out that in the future oil would not be the prime mover and actor of the Gulf economy. Gulf investments abroad reached $ 248 billion in 2015, Qatar Energy & Industry Minister added.

He underlined the importance of creating real and sustainable development in the GCC by attaching more attention to the industrial sector, pointing out that the contribution of the industrial sector in the GDP of the GCC countries accounted for 10 percent, which is low when compared to the developed countries.

Dr AlSada reiterated the need for industrial coordination among the GCC countries in manufacturing, small and medium sectors in particular in addition to supporting the private sector and encouraging new initiatives in production and export domains.

On this occasion, Saudi Minister of Energy, Industry and Mineral Resources Khalid bin Abdulaziz Al-Faleh praised economic achievements of the GCC states within few decades, highlighting Saudi Arabia as the biggest economy in the Middle East and a member of the Group of Twenty.

He said that his country and Qatar aspire to double the volume of their investment, adding that the private sector should play a leading role in this regard.

Sheikh Khalifa bin Jassim Al-Thani, Chairman Qatar Chamber of commerce said that the forum and the exhibition provide a great opportunity to bring economic and trade relations between the two countries to new horizons. The event is an important opportunity to exchange expertise and experiences, he added.

He showed his confidence that the forum aims to promote joint cooperation and explore opportunities available in both countries, in addition to identifying obstacles that prevent the achievement of common goals in developing trade relations.

Dr Hamdan bin Abdullah Al-Samrain, President of the Council of Saudi Chambers of Commerce welcomed the Qatari dignitaries. He said that joint forum is a great opportunity for business community in both countries to enhances inter-trade relations and will attract more joint investments.