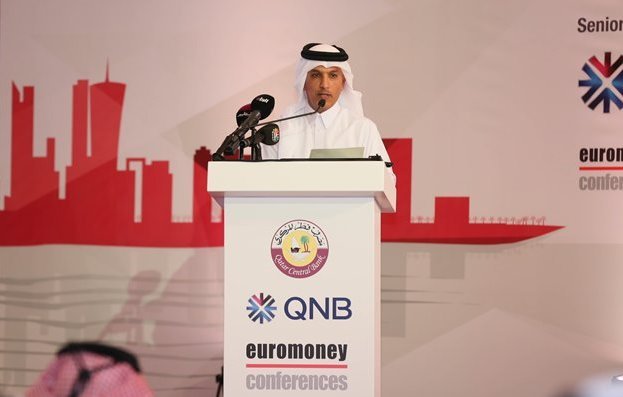 The global economy is passing through a period of high instability and uncertainty caused by a range of geopolitical pressures, but Qatar offers a positive example of strong leadership and clear polices, according to senior economists and banking leaders attending the Euromoney Qatar Conference took off today at Hotel Ritz Carlton, Doha.

More than 600 senior finance and banking executives are attending two lays conference where they heard from a range of major speakers on the risks and opportunities facing national, regional and global economies today.

Speakers broadly agreed that a range of factors – including the uncertainty around future trade policies of the incoming Trump administration in the United States, the challenges created by the rise of populism in Europe and particularly the Brexit vote in the UK, plus concerns over China’s debt profile and ‘credit gap’ – are all likely to continue to impact world trade and the global financial sector in 2017.

When combined with continuing subdued oil prices and the on-going instability created by 2010’s Arab Spring on the MENA region, it is likely that global investors will seek a higher risk premium when investing in the region in the coming years.

Senior Qatari leaders outlined the important steps that Qatar has taken to drive positive growth and enhance the country’s position as a role model for sustainable development.

Ali Shareef Al-Emadi, Minister of Finance, State of Qatar acknowledged the challenges facing developed economies in 2017 and suggested that aligned global financial policies will be necessary to deliver sustained growth.

He pointed to Qatar’s continued success in delivering economic growth even against the backdrop of the fall in oil and gas prices of recent years.

Ali Shareef Al-Emadi said: “According to IMF figures, Qatar is forecast to reach an annual growth rate of 3.4 percent in 2017, which is the highest forecast growth in the GCC. This has been achieved through a number of measures, including an increase in efficiency in public spending, the growth of the financial sector and a rise in the private sector’s contribution to economic growth. The non-oil sector achieved a growth rate of 5.8 percent this year, demonstrating the success of our diversification strategy.”

The 2016 National Budget for Qatar reinforces Qatar’s confidence for the future, with dedicated investment in healthcare, education and transportation – along with investment in infrastructure for the 2022 FIFA World Cup – all likely to have a positive effect on the national economy.

The Finance Minister said that the total budget committed for the development of key strategic mega projects stands at QR 374 billion, with a further QR 46 million set to be invested in 2017.

Qatar Finance Minister pointed to significant recent regulatory reforms, such as the enhancements made to the government’s tender and procurement process to improve transparency and encourage small business participation, as key steps to enhance economic diversification.

Ali Ahmed Al Kuwari, Group CEO, Qatar National Bank, echoed the confidence in Qatar’s prospects. In his presentation, he highlighted Qatar’s position as the richest country in the world in terms of GDP per capita, supported by proven gas reserves projected to last for 135 years. In addition, he noted a current account surplus of 4.1 percent of GDP in 2016 and the top investment grades received from all major ratings agencies as evidence of Qatar’s sustained economic performance.

The strength of Qatar’s economy is reflected by the position of its largest bank, said Ali Ahmed Al Kuwari: “We set ourselves the target of being number one in all key metrics – assets, profitability and revenue – across the MENA banking sector by 2017, and I’m pleased and proud to say we have achieved that goal one year early in 2016.”

With Qatar providing a positive example of economic leadership, it will be able to navigate the challenging tides of the current world economy, said experts.

Renowned economist George Magnus suggested that, while the underlying economic picture was net positive, political factors were likely to increase uncertainty and instability into 2017 and beyond. He pointed to the slowdown in growth in world trade since the 2008 financial crisis and suggested this no longer looked like a cyclical slowdown but rather a structural change that was likely to be exacerbated if the new US administration pushed forward trade barriers.

He mentioned about China’s high credit growth and increased credit gap – in terms of debt as a percentage of GDP – as a potential risk for the future.

Hafez Ghanem, Vice President, Middle Est and North Africa, The World Bank, outlined some of the economic challenges likely to affect stability in the MENA region. In particular, he emphasized the role that life satisfaction, access to basic services and economic inclusion play in delivering stability
.
“We can see that the MENA region has the world’s highest level of youth unemployment and particularly unemployment for the more educated section of young people, which is an urgent issue that needs to be addressed. Dealing with a skills mismatch that sees educated young people accept jobs that don’t match their level of education, and providing more employment opportunities, particularly for women, will be the key challenge of the coming period,” he said.

The geopolitical pressures facing economies in the region were examined in a special panel on the morning of Day One, which included speakers from Georgetown University Qatar, Kuwait investment bank Markaz, The World Bank and Geneva Centre for Security Policy.
An afternoon panel examined how well Qatar is prepared to manage these macroeconomic headwinds, and featured speakers from Qatar Financial Centre Authority, Qatar National Bank, Qatar Islamic Bank and McKinsey and Company.