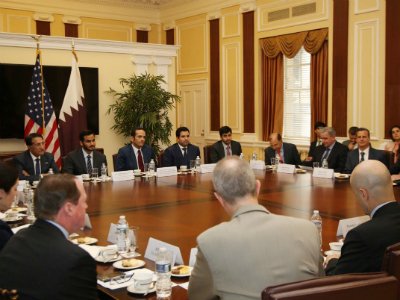 Sheikh Mohammed bin Abdulrahman Al-Thani, Foreign Minister of Qatar spoke about the importance of the US-Qatar economic partnership at a meeting with the U.S. Chamber of Commerce today.

Sheikh Mohammed bin Abdulrahman Al-Thani reassured the participants that the fundamentals of the Qatari economy are strong and resilient. Qatari banks are well capitalized and have sufficient liquidity, he told them, and Qatar’s international investment portfolio is well diversified. Qatar’s credit rating remains among the top 25 in the world, the Foreign Minister observed, even after recent adjustments.

“Our global investments have resulted in strong economic growth and have produced jobs in the US and across Europe, as well as solid returns for Qatar,” he told the Chamber. “Thats a clear win-win for Qatar and its international partners,” he said.

The Foreign Minister noted that the blockade was having a minimal impact on Qatar’s exports. Shipments of LNG, oil, petrochemicals and other commodities continue uninterrupted, he said, because exports to Japan, India, South Korea and China, which account for nearly three-quarters of Qatars export volume, are all countries unaffected by the blockade. In addition, imports via Hamad Port, one of the largest deep-water ports in the region, and via Hamad International Airport, one of the most modern airports in the world, have not been affected, the Minister said.

“You can be sure that Qatar will continue to strengthen and promote our business and commercial relationship with the United States,” the Foreign Minister told the Chamber audience. “Our bilateral trade with the U.S. has increased by more than 32 percent since 2012 and we expect to see further increases in the coming years.”

Sheikh Abdulla Al-Thani provided an update to the business leaders on the $35 billion investment in the US over 5 years pledged in 2015. “We’ve already invested $26 billion,” he said, “and we are looking to invest $10 billion more in the US infrastructure sector.” He also indicated that we have strong belief on the fundamentals of the US economy therefore QIA focuses on building a strong partnership and expanding the investment program. Moreover, he also discussed plans to open a QIA office in San Francisco in addition to the one in New York. Signifying that these expansions are a sign of strengthening the Qatar-US relations. The announcement makes QIA one of the few sovereign wealth funds with offices in New York and San Francisco

The event was hosted by Tim Lenderking, Assistant Secretary for Arabian Peninsula Affairs, Bureau of Near Eastern Affairs at the US State Department, who delivered the opening remarks.