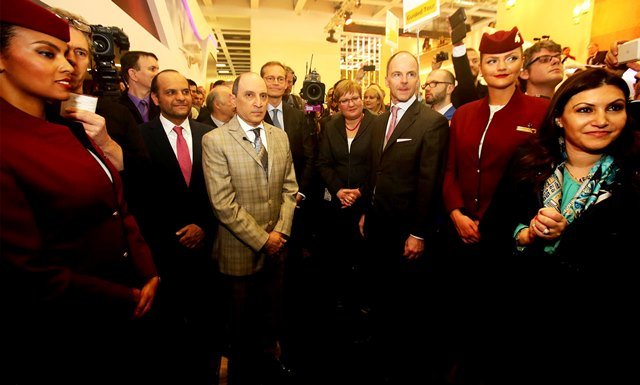 Qatar Airways has completed a spectacular showcase at this year’s ITB Berlin, at which the airline’s new Business Class QSuite was revealed in a world exclusive ceremony to hundreds of spectators in presence of Mayor of Berlin, Michael Müller and Qatar Ambassador to Germany, Sheikh Saoud Bin Abdulrahman Al-Thani.

In a world-first for Business Class travel, Qatar Airways introduced its new patented Business Class QSuite on the first day of the exhibition, to media broadcasting live from the event, including CNN, CNBC, Euro News, Channel News Asia and Aljazeera, with influential TV presenter from CBS America Peter Greenberg as one of the first to review the seat in person.

In this, our 20th year, we are proud to demonstrate our ongoing ambition to continuously innovate to break boundaries and surpass the expectations of our travelers. We will continue to develop new and exciting propositions for our passengers.”

The new QSuite features adjustable panels and movable TV monitors on the centre four seats that allow a private area to be reconfigured for business colleagues, friends or family groups travelling together in a more social and private setting, specific to a group or individual’s unique requirements.

Complemented by a new on board menu that includes a selection of snack sharing dishes, ideally suited to the new cabin layout, the Business Class experience will also include a wake-up ‘Express Breakfast’ service and ‘Do Not Disturb’ sign for those wanting to make the most of their time on board to rest within the new private suites.

Each seat is crafted with thoughtful and luxurious details such as hand-stitched Italian leather and satin rose gold finishing, ensuring the continued five star standard of Qatar Airways Business Class, voted Best in the World by Skytrax 2016.

Al Baker hosted a capacity crowd press conference on the opening day of ITB, with hundreds of international media in attendance, all of whom came to learn about the airline’s continued expansion plans and further details of the uniquely patented QSuite. Worldwide media coverage of the QSuite launch unanimously proclaimed the new product ground-breaking.

Guests to the Qatar Airways stand were able to sample a taste of the new QSuite in a real model of the new Business Class cabin, ensuring that visitors were able to leave having experienced the new patented product first hand.

Qatar Airways also launched a new next generation user interface for Oryx One, its award-winning inflight entertainment system that features up to 3,000 movie, television and game options. The platform will make it even easier to navigate the wide selection of movies, music and TV box sets, ensuring passengers get the very best entertainment experience from the moment they step on board.

Known for introducing industry firsts, Qatar Airways is the national carrier of the State of Qatar, and is one of the fastest growing airlines operating one of the youngest fleets in the world.

Qatar Airways has a modern fleet of 195 aircraft flying to more than 150 key business and leisure destinations across six continents.