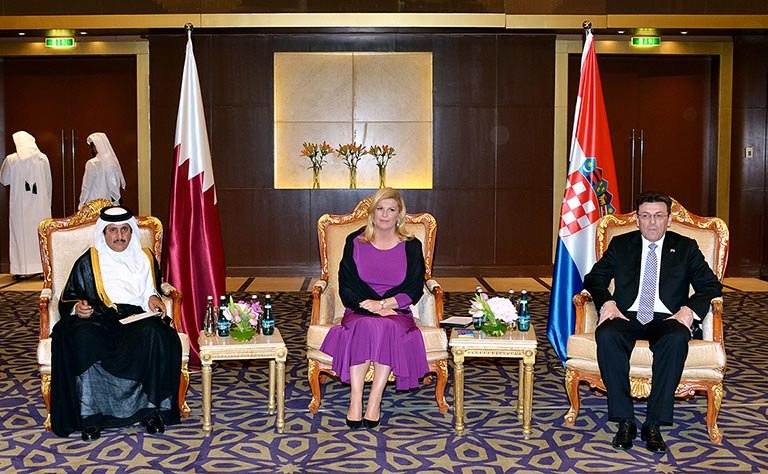 Kolinda Grabar Kitrovic, President of the Republic of Croatia said that Croatia is an attractive and favorable country for doing business, and has many opportunities for Qatari businessmen to invest in various economic sectors including infrastructure, energy, tourism, health, pharmaceutical, food industry to advanced technology.

Addressing Qatari-Croatian Business Forum held today at the Hotel Granf Hyatt, President of Croatia showed her satisfaction telling that economic and trade cooperation between the two friendly countries grew to the level of political relations and are enhanced since 2002.

She said that her country attaches great importance in building strong economic and trade relations with Qatar. She hoped that cooperation between Qatari and Croatian businessmen will further strengthen these relations. President of Croatia told that many Croatian companies want to enter the Qatari market.

President Kitrovic called on Qatari businessmen to invest in her country and provides an open business environment.

Sheikh Khalifa bin Jassim Al-Thani, Chairman of Qatar Chamber addressed on the occasion. He said “Qatar and Croatia enjoy distinct relations at all levels and fields. But their trade volume is still below expectations. It reached last year only $ 22 million. It doesn’t reflect the available potentials each country own. Therefore, I wish this meeting would be a new start for activating a positive cooperation between the private sector in both friendly countries.”

Chairman of Qatar Chamber said that Qatar Chamber and businessmen are keen on strengthening business relations and interested to establish genuine partnerships and joint enterprises whether in Qatar or Croatia.

He hoped that this meeting would be a new start for activating a positive cooperation between the private sector in both friendly countries.

Luka Burilovi, President of Croatian Chamber of Economy in his speech on the occasion said that Croatia is Central European and Mediterranean country, an EU member country. We offer numerous opportunities for joint projects and we guarantee stability and the safety of business and investments. The Republic of Croatia guarantees by law the same rights to foreign investors as it does to the Croatian investors and it ensures free transfer of return on equity from the country upon completion of the investment.

He said that Memorandum of Understanding signed between the two Chambers will be institutional support and encouragement for the development of further cooperation between the two sides.

“We look forward to achieving a new prosperous stage of our bilateral partnership,” he said, telling that the Croatian Chamber of Economy has organized several Croatian trade mission to Qatar. “The first one was organized in 2003 and since then we work together with our Qatari partners to strengthen the economic relations between our companies and our two countries.”