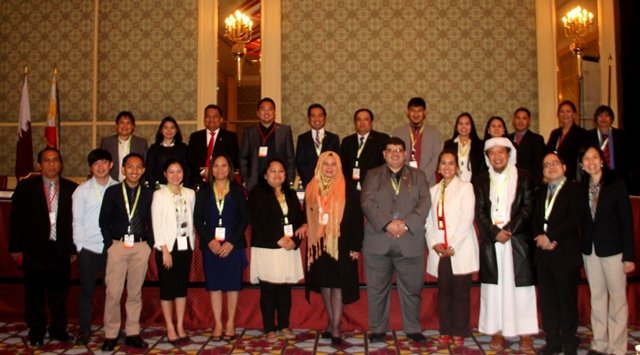 She assured stability in the policies of President Rodrigo Duterte government and zero tolerance in any graft or corruption. Dr. Charito Plaza, a former parliamentarian and only female armed forces official in the senior rank of Brig. General is on her last leg of official visit to the three rich Gulf States in Qatar studying the possibility of attracting investments to Philippines.

After her meeting with Dr. Mohammed bin Saleh AlSada, Minister of Energy & Industries of Qatar, Dr. Charito Plaza showed her deep satisfaction from meeting and told that Minister has shown it’s interest in investments in energy sector.

Later in afternoon, Director General of Philippines Export Economic Zone met Sheikh Ahmed bin Jassim Al Thani, Minister of Economy & Trade, State of Qatar. Qatar News Agency reports that during their meeting, both reviewed bilateral relations and discussed aspects of joint cooperation and means to develop them especially in the fields of economy, trade and investment.

In 1997, Qatar and Philippines signed a trade, economic and technical cooperation agreement. The Philippines is the 26th trade partner to Qatar and bilateral Trade volume between the two countries amounted to QR 2.1 billion in 2015.

Roussel Reyes, Charge d’ Affairs at the Philippine Embassy welcomed the members of Philippines delegation to Qatar and wished them success in their mission. Joseph Rivera, Qatar based Special Advisor to Director General of PEZA conducted the norms of the conference.

Abul Khayr Amalon Alonto II of Mindanao Development Authority (MDA) told that consequently during last five years, MDA is witnessing 6-7 % growth in it’s Exports & Investments. He advised the investors to take benefit as it is the right time for investments in their area of interest & expertise.

Brig. Gen. Dr. Charito Plaza replying to a question told that there are 3,903 companies registered till 2016 in Philippines Economic Zones employing work force of over 1.3 million.

Director General Philippines Export Zone Authority told as of November 2016, exports worth of US $ 43.6 Billion were registered from PEZA controlled economic zones, which itself provides confidence among foreign investors.

20 January 2022 By Ashraf Siddiqui More than 7,000 books of different ...
END_OF_DOCUMENT_TOKEN_TO_BE_REPLACED