Pakistan Signs MoU with Alibaba to Promote Exports Through e-Commerce 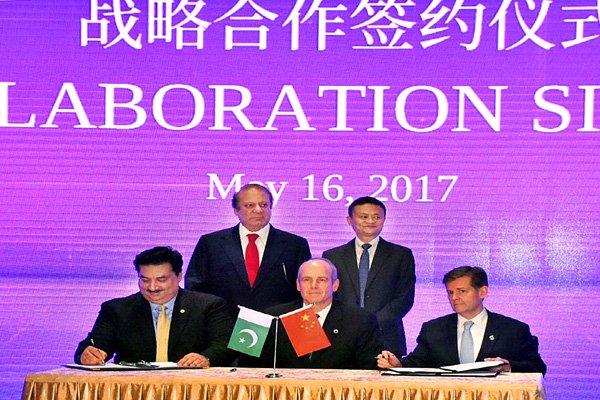 The agreement between Alibaba and Trade Development Authority of Pakistan was signed by Commerce Minister Khurram Dastgir and Michael Evans, President of Alibaba Group, and Douglas Feagin, Senior Vice President of Global Business of Ant Financial, on behalf of Alibaba, during the visit of Prime Minister Muhammad Nawaz Sharif to the headquarters of the company.

Under the terms of the MoU, Alibaba, Ant Financial, and TDAP agreed to foster growth of worldwide exports of products by small and medium sized enterprises (SMEs) in Pakistan through e-commerce. Online and offline training programs for the SMEs would also be conducted by Alibaba in a bid to assist SMEs with on-boarding on to Alibaba’s platforms and optimizing exports through e-commerce.

TDAP will help identify suitable SMEs to participate in the training programs while Alibaba will be responsible for providing industry analysis to TDAP to assist them in their selection process.

In addition, Alibaba, Ant Financial and TDAP have agreed to promote the growth of financial services in Pakistan in areas such as mobile and online payment services.

The parties have also agreed to adopt cloud computing services to support the online and mobile e-commerce businesses of SMEs in Pakistan.

Prime Minister Muhammad Nawaz Sharif visited today on Tuesday Headquarters of e-commerce giant Alibaba Group in scenic Hangzhou city of China’s Zhejiang province. He was accompanied with Federal Commerce Minister Engineer Khurram Dastgir. Upon arrival, Prime Minister of Pakistan was received by Jack Ma, Executive Chairman of the company , who founded the entity in 1999 which has now flourished as one of the world’s largest global online market.

Pakistani Prime Minister visited the Alibaba Museum wherein he was giving an overview of the company’s history and profile, what Executive Chairman said had also set a record of earning a revenue of $18 billion dollar in a day.

Besides online trade, the prime minister was apprised that, Alibaba has also spread its network to rural economy, micro-financing, marketing, public welfare, life sciences and traffic control with 33,000 stations operating across the globe.

Jack Ma told that the company had a consumer base of around two billion besides providing jobs to 100 million people.

Pakistani Prime Minister was told that Alibaba company delivered 60 million packages across China every day and the company had a record of delivering products to the toughest locations in the world including Mount Everest.

The buyers on Alibaba are located in over 200 countries.