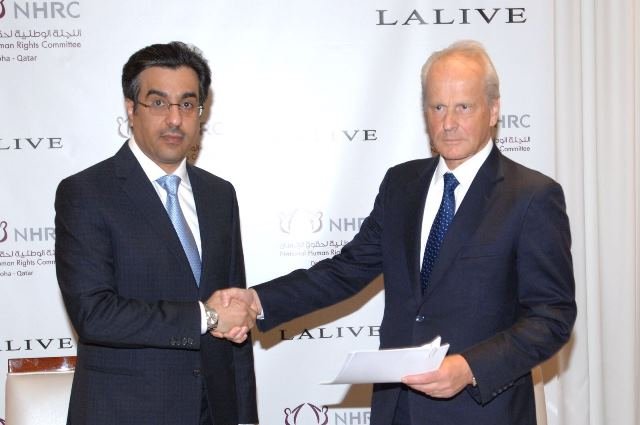 National Human Rights Committee Qatar (NHRC) has signed a contract with the Lalib International Law Office in Geneva, under which the second party (Lalif) will take over the cases of human rights violations due to the siege imposed on Qatar by Qatari nationals or GCC nationals who have lodged their complaints with NHRC. In addition to the legal prosecution of Al-Arabiya channel in its allegations and misdemeanors to the National Human Rights Committee in Qatar.

Chairman NHRC during his briefing after signing agreement with ‘International Law Office’ told that the law firm has extensive experience in handling Human Rights cases. He told that all complaints of the victims gathered have been handed over to the law firm.

He said that following the mechanisms, NHRC will follow up these cases with Int’l Courts of Justice or through National jurisdictions in the countries of the blockade itself. He told that each case will be studied and handled accordingly. Dr. Ali AlMarri told these cases will be prosecuted through the law firm where necessary in the courts of the besieged countries for compensation.

He said that if the courts in concerned states refuse to take up the cases, it will be condemned through special reports for hindering providing of the justice to victims.

He said “Even if the crisis is resolved at the political and diplomatic level, legal proceedings will continue until the right to return to its people.”

Al-Marri called on all those affected by the embargo violations against Qatar to document their complaints to the National Human Rights Committee whether violations of the right to work, movement, residence, family reunification, property or any other human rights violations.

He said: These documented complaints will be transferred to the International Law Office to deal with them as stated in the principle of reparation approved by international human rights conventions or even through the special procedure or internationally known procedure (1503). Dr. Al-Marri said that ‘This procedure has been put in place to address the persistent patterns of gross and reliably attested violations of all human rights and fundamental freedoms in any part of the world and under any circumstances. In that case, the complaints procedure was kept secret in order to strengthen cooperation with the State concerned. The action must be victim-oriented and timely.’

Al-Marri emphasized the possibility of this procedure, where all the requirements are met. Complaints procedure adopted by the Human Rights Council confirming its use in the event that the damage and the fact is clearly politically motivated and the subject matter is incompatible with the Charter of the United Nations, the Universal Declaration of Human Rights and other applicable human rights instruments.

Al-Marri said: “Any injured person whose case is documented by the National Human Rights Commission can be compensated in accordance with international law.” “All victims of human rights violations in this crisis can obtain effective redress and redress on the basis of these recognized legal standards,

Dr. Vigo Hiscanen, Head of the International Law Office and specialist in international arbitration and disputes, said: “There are a large number of complaints recorded by the National Committee for Human Rights in Qatar. We are taking many steps to collect these complaints, review the evidence, Which suits it.