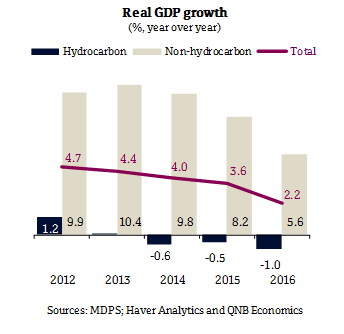 Real GDP growth was 1.7% in Q4 and 2.2% for 2016 as a whole, moderating from annual growth of 3.6% in 2015. Going forward, we expect growth to pick up in 2017 driven by stronger non-hydrocarbon sector growth due to higher oil prices, an increase in capital spending and fading drag from manufacturing.

Growth in the non-hydrocarbon sector was 5.6% in 2016. Construction was the largest contributor to growth, adding 2.3 percentage points (pps). Following construction, services such as finance (1.0 pps), government (0.8 pps) and real estate (0.6 pps) were the other key sectors supporting growth. Underpinning and driving growth in these sectors was robust population growth of 7.3% in 2016. These gains more than offset a contraction of 1.0% in manufacturing, the largest segment of Qatar’s non-hydrocarbon economy accounting for 20.0% of the sector. However, this decline is attributable entirely to lower output in Q2 2016 and appears to be a one-time occurrence.

We expect growth to pick up in 2017, led by the non-hydrocarbon sector. Supporting higher growth will be three key factors.

First, we expect oil prices to pick up and average between USD55/b and USD60/b in 2017, an increase of over 20.0% from the average level of USD45/b in 2016. In addition to boosting government revenues, higher oil prices will improve consumer and business sentiment, leading to faster job creation, more spending on durable and non-durable consumer goods and higher investment. Indeed, we have seen signs of that with the recovery in the fourth quarter of 2016, which bodes well for 2017.

Second, the government announced in its latest budget plans to raise capital spending by 3.2% in 2017. This was also accompanied by a commitment to increase the allocation to capital spending over the next three years, providing support to future growth. The increased allocations of capital spending will be on projects related to the upcoming World Cup, transportation, infrastructure, education and health. The government’s commitment is buttressed by its strong balance sheet.

Third, the drag from the manufacturing sector should fade in 2017. Manufacturing subtracted 0.2 pps in 2016 compared to adding an average of 0.6 pps to non-hydrocarbon growth over 2014-15. The sector has already begun to recover, posting positive growth in Q4 2016. A rebound in the sector will also be aided by the opening of a new refinery in Ras Laffan which began production in December 2016.

Despite low oil prices, the Qatari economy has continued to be resilient in the face of low oil prices. Qatar has enjoyed the strongest non-hydrocarbon GDP growth in the region throughout the oil price decline. Looking ahead, we expect growth to strengthen in 2017 and higher capital spending should support growth over the medium-term.

Disclaimer and Copyright Notice: QNB Group accepts no liability whatsoever for any direct or indirect losses arising from use of this report. Where an opinion is expressed, unless otherwise provided, it is that of the analyst or author only. Any investment decision should depend on the individual circumstances of the investor and be based on specifically engaged investment advice. The report is distributed on a complimentary basis. It may not be reproduced in whole or in part without permission from QNB Group.