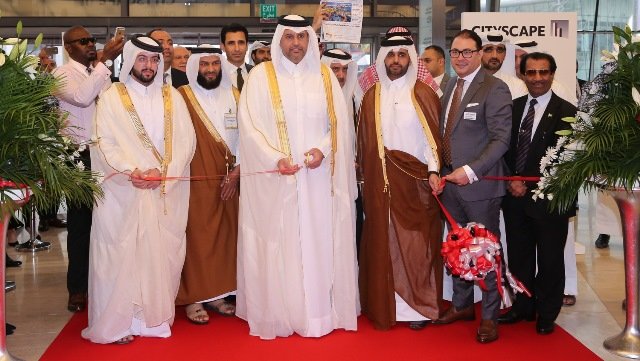 Landmark deals were made today with a number of new projects unveiled for the first time on day two of Cityscape Qatar 2017, by 85 exhibitors from 25 countries including; Qatar, U.K., Turkey, Pakistan, U.A.E, Italy and Azerbaijan.

Qatar’s leading project management consultancy firm, ASTAD showcased its premier services and projects including the World Cup Stadiums in preparation for FIFA World Cup 2022, while demonstrating its expertise within the construction industry.

Commenting on the firm’s participation, ASTAD CEO Ali al Khalifa said: “We are delighted to be a part of an event of this magnitude. It is a great opportunity to share our contribution on some of the most complex infrastructural projects, along with ASTAD’s approach in servicing clients’ needs and realising their vision.”

Bandary unveiled for the first time as well its most recent Millennium residential property, located in Porto Arabia at the Pearl, Qatar boasting stylish designs and a luxurious lifestyle.

Maen al-Haj, Property and Real Estate Manager, Bandary Real Estate, said “We are happy to participate with Cityscape as it’s looked upon as the main destination for investors in the region. Cityscape Qatar has given us the perfect opportunity to generate interest in our flagship developments and projects.”

Kleindienst, an established real estate and property developer and the biggest European real estate company in Dubai, is also participating in this year’s exhibition; showcasing ‘The Heart of Europe’ project, a cluster of six islands on ‘The World Island’ in Dubai, which will boast 14 hotels and resorts and many unique features, never seen anywhere else in the world.

Commenting on their participation, Amr Kandeel, Manager Business excellence said “Cityscape Qatar is the perfect platform to create excitement about The Heart of Europe project and we received an overwhelming amount of interest from media and clientele during the show.”

Aristo Developers, a reputable developer with over 3 decades of infrastructure experience throughout Cyprus and Greece, showcased several large scale projects including the Aphrodite Waterpark, the International School of Paphos, and the Kings Avenue Mall – the most contemporary shopping mall on the island of Cyprus.

“The £9bn, 42 acre Battersea Power Station Development is set to be one of the most exciting real estate projects London has ever seen. The project will breathe life into one of the world’s most recognisable and iconic landmark. There will be more than 4000 new homes, over 250 retail outlets, cafés and restaurants, 21 hotels, 18 acres or parks and 1.25 million square foot of office space of which the new Apple campus will be the jewel in the crown.” concluded Mr. Patel.

Among key projects that were on display as well, Dreamland Country & Life, a unique lifestyle project in Azerbaijan, constructed on 330 acres in Baku, with 394 fully renovated luxury residences and 7 different types of luxury villas offering an exclusive life style.

Along with the other international exhibitors, Maggi Group Real Estate, an Italian Real Estate Advisory Services company, also participating at the exhibition commented: “It has been great to meet with many entrepreneurs in Qatar who have shown interest in the Italian Real Estate sector and have had the opportunity to view our luxury properties in Milan, integrated projects for tourism and hospitality development in Sardinia and investments in various Italian cities.”

Ahmed Zakaria, Exhibition Director, speaking on behalf of Cityscape, said: “We are pleased with the number of high caliber projects on display at Cityscape Qatar this year; the exhibition has witnessed a strong start to its sixth edition with many landmark deals and the unveiling of key projects from leading local and international exhibitors. We look forward to a successful finale to this year’s edition and the inking of further major deals tomorrow.”

Running in parallel to Cityscape Qatar 2017, two key content-rich events, including the Cityscape Qatar Conference which was supported by Gold Sponsors Kohler and Regus, featured an industry led panel discussion to examine the role of real estate in achieving Qatar’s long term goals.

Alongside the Cityscape Qatar Conference, Cityscape Qatar Talks, a series of free-to-attend seminars for industry professionals and members of the wider public interested in learning the secrets of profitable real estate investment took place during the exhibition.

Cityscape Qatar Talks provided attendees on day two with insights on a number of wide ranging topics, including ‘Trends and Outlook’ as well as ‘Investment Hotspots’, and placed a particular focus on Qatar, the UAE, Turkey, the UK and US real estate sectors.

Cityscape Qatar 2017 will run for its third and final day, Wednesday 15 March, 2017 as buyers and investors continue to benefit from exclusive offers and profitable investment opportunities available.

The final day of the exhibition will open from 1 PM to 10 PM.

Cityscape 2017 was opened on 13th March 2017 at the Doha Exhibition & Convention Center by Sheikh Ahmed bin Jassim bin Mohammad Al Thani, Minister of Economy and Commerce of State of Qatar. Ambassador Shahzad Ahmad of Pakistan was present on the occasion.