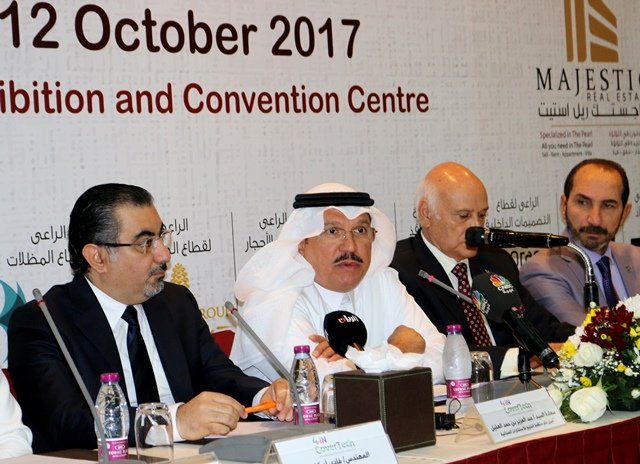 Third ‘COVERTECH 2017’ Exhibition will be held between the 10th and the 12th of October 2017 at the Doha Exhibition and Convention Center (DECC).

It was announced today at a press conference held at GOIC’s headquarters in Doha. Present on the occasion were Abdulaziz Bin Hamad Al-Ageel, Secretary General of GOIC, Dr. Moyasser Saddiq, CEO of Ibhar Group and representatives of the exhibition’s sponsors.

Secretary General of GOIC said ‘For four decades now, GOIC has contributed to supporting the GCC industrial sector and deployed relentless efforts to achieve public and private sector socio-economic integration in the region. To accomplish this objective, GOIC has always encouraged the private sector to play an active role in the economies of GCC countries. In fact, GOIC, the internationally-renowned, competitive and outstanding expertise-hub in the area of industrial consulting services, has left a unique and remarkable fingerprint in the field of industrial development in the Gulf.”

Al-Ageel hoped the exhibition in its third version would achieve its objectives. ‘We wish to see the 3rd COVERTECH achieving its goals in supplying a critical industrial sector – the building materials sector – with its needs, particularly at this stage during which many mega-projects relating to the 2022 FIFA World Cup like big malls, hotels and stadiums are being launched., he stated.

‘ This exhibition will be the ideal platform for companies and stakeholders, particularly Qatari and Gulf corporations, to meet representatives of global companies. This is very promising, as we are expecting major deals to be concluded, more fruitful business relations and expertise exchange. We also hope that COVERTECH 2017 will form an opportunity to strengthen industrial development and commercial cooperation between GCC countries in the best interest of our beloved Gulf countries, Al-Ageel said’.

Dr. Moyasser Al-Saddiq, CEO of Ibhar Group said ‘COVERTECH is the only exhibition for wall and floor covering technologies and lighting in the GCC. He told that this year’s participants have doubled in numbers. Among participating countries include Qatar, Turkey, Brazil, China, Jordan, Palestine, Egypt, Tunisia, Ukraine, Italy, Oman, Saudi Arabia and Lebanon, in addition to a number of chambers of commerce and industry from Arab and European countries.

He praised the sponsors on their key role, such as the international union of economists and managers in the European union countries (international sponsor) and sponsors of last year’s COVERTECH to include Qatar Green Building Council and Qatar Development Bank (QDB). He also applauded Qatar Tourism Authority for supporting international specialised exhibitions promoting tourism and commercial exchange in Qatar and relevant countries.