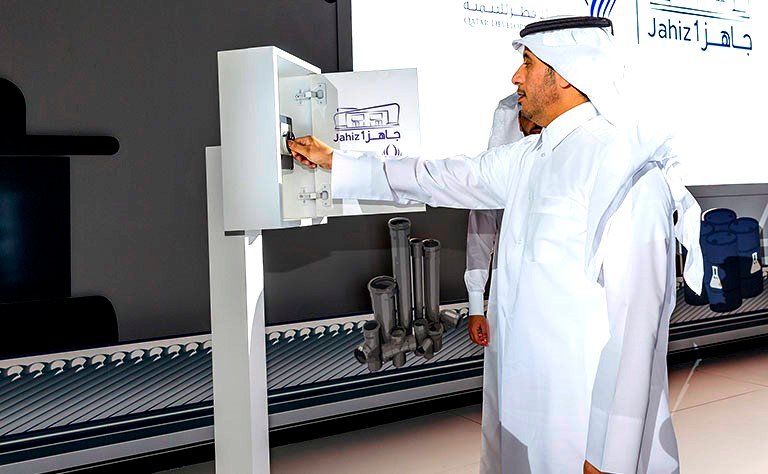 Jahiz1 project is an initiative of Qatar Development Bank to rent industrial facilities ready in order to pave the way for the entry of more new SMEs in technological, innovative and eco-friendly industries, and in line with efforts to accelerate the development of the Qatari private sector and diversify the economy.

Among main goals of the ‘Jahiz 1’ project is to build a strong industrial production base and to support the local Qatari products to achieve balanced economic growth, away from the oil revenue as the main source of income. It also increases the contribution of the industrial sector in the gross domestic product.

A documentary was also shown on the occasion featuring various aspects of the project.

Dr. Mohammed bin Saleh Al Sada, Minister of Energy and Industry lauded Qatari SMEs which succeeded to meet the requirements of industrial areas identified by the ministry in the technological, innovative and Eco-friendly industries operating in the field OF chemicals, plastics, wood, and electronic materials.

Dr. Al Sada said that the launch of this initiative and other initiatives comes from the government guidelines that support the economic system in Qatar by strengthening the Qatari product, promoting a culture of creativity and innovation, developing economic policies and legislation according to the best international standards, developing the private sector to reach competition and regulating the SMEs sector and national entrepreneurship.

Dr. Al Sada emphasised on the importance of introducing Single Window facilitate for new entrepreneurs. He highlighted the important role of the supervising authority in its sector. He told that the framework of the national economy is based as per the guidelines of Prime Minister and the Minister of the Interior’s directives to the Business and Investment Environment Development Committee. As Prime Minister directives to exert all efforts to promote economic growth by providing the appropriate environment to diversify the economy, attracting domestic and foreign investment, increasing the efficiency of public spending, applying the principle of general effectiveness and the principle of cost-effectiveness in all projects of 2017-2022. Keeping in view National Development Strategy and achieving the partnership between the public and private sectors as well as involving the expatriate community and citizens.

He told that the State of Qatar has achieved advanced positions within the Global Competitiveness index as it ranked 18th globally in the latest report of the World Economic Forum, the second in the Middle East, and has maintained its credit rating among the highest in the world. The gross domestic product (GDP) at constant prices also achieved an annual growth through 2015 compared to an average growth rate of the oil exporting countries in the Middle East. The contribution of the private sector in the GDP in the state had also increased.

He assured QDB support through its various services to Qatari entrepreneurs and to the small and medium enterprises right from it’s very beginning.

Al Khalifa told that QDB is effectively working in cooperation with the Ministry of Economy and Commerce, to include a national framework for small and medium enterprises within the 2017-2022 National Plan. He announced that bank will soon launch Jahiz 2 initiative that supports food and beverage sector, with an estimated total investment value of more than QR 180 million. He said, adding that this initiative will provide ready-built industrial facilities to establish industrial projects in this sector.

Qatar Development Bank provides an opportunity to rent ready built industrial facilities for manufacture within the Jahiz1 project. Plots will be provided on monthly lease of 5-year in many sectors.