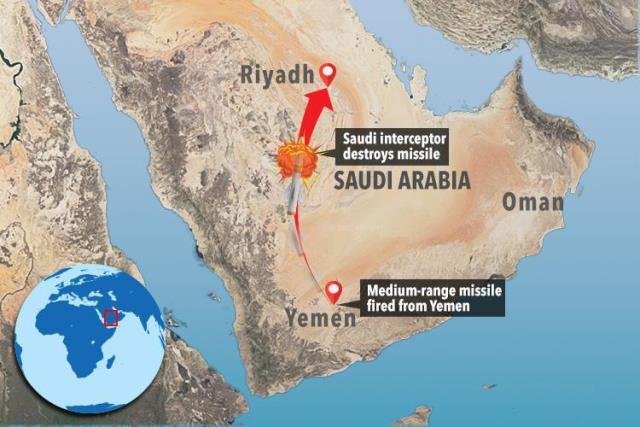 Yemen’s Houthi rebels have claimed responsibility for a loud explosion in Riyadh, saying they fired a long-range ballistic missile that traveled more than 800 kms over the border with Saudi Arabia.

A spokesman for the rebels told Al Jazeera they launched a Burkan 2-H missile –  a Scud-type missile with a range of more than 800km – towards Riyadh late on Saturday.

“The capital cities of countries that continually shell us, targeting innocent civilians, will not be spared from our missiles,” the spokesman said.

Al Masirah, a TV network run by the Houthi rebels, also claimed responsibility for the attack on their social media account.

The official Saudi news agency SPA quoted Colonel Turki al-Maliki as saying that at exactly 8:07pm local time(1707 GMT), a ballistic missile was fired from Yemeni territory towards the kingdom.

Maliki said Saudi forces used a surface-to-air Patriot missile to destroy the missile which shattered into fragments in an uninhabited area east of the airport.

He added that there were no reported casualties.

Al Jazeera could not independently verify the reports.

In an interview to Al Jazeera earlier this month, Mohammed Abdul Salam, a spokesman for the Houthi rebels, threatened to to escalate operations on the Yemen-Saudi border and target deep inside the kingdom.

“The Saudis started the war. Our response will continue and increase, whether it’s targeting deep inside Saudi Arabia, targeting military positions where Saudi jets fly from or military bases inside Yemeni territory,” Abdul Salam said.

“Abu Dhabi and others that target Yemen, are as far as we’re concerned – a fair military target. Any country that targets Yemen will be struck by our missiles.”

The war in Yemen, the region’s poorest country, started in 2014 after Houthi rebels seized control of the capital Sanaa and began pushing south towards the country’s third-biggest city, Aden.

Concerned by the rise of the Houthi rebels, believed to be backed by regional rival Iran, Saudi Arabia and a coalition of Sunni Arab states launched an intervention in 2015 in the form of a massive air campaign aimed at reinstalling President Abd-Rabbu Mansour Hadi’s government.

Since then, more than 10,000 people have been killed and at least 40,000 wounded, mostly from Saudi-led air strikes.