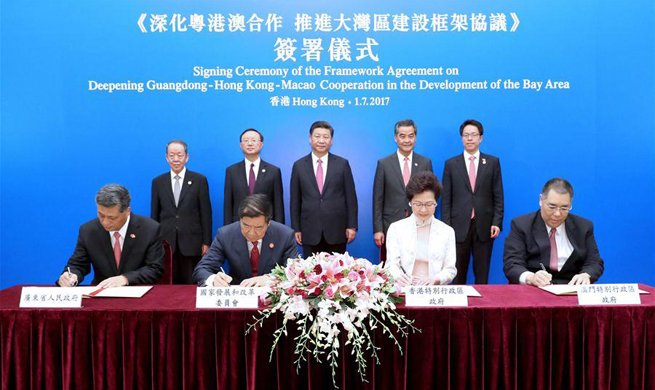 President of China, Xi Jinping Saturday attended the signing ceremony of the framework agreement on the development of the Guangdong-Hong Kong-Macao Greater Bay Area.

With the support of the central government, Guangdong Province, the Hong Kong Special Administrative Region (SAR) and the Macao SAR will make joint efforts to improve their collaboration mechanisms and facilitate win-win cooperation, according to the agreement.

All sides will deepen cooperation to build the bay area into a more dynamic economic zone that is suitable for living, doing business and travelling, said the agreement, noting it will become a first-class bay area and city cluster in the world.

According to the central government’s annual work report in 2017, China is planning to develop a city cluster in the Greater Bay Area, playing to the distinctive strengths of Hong Kong and Macao, and elevating their positions and roles in the mainland’s development and opening up drive.

Xi arrived in Hong Kong Thursday for a three-day trip to attend celebrations marking the 20th anniversary of Hong Kong’s return to the motherland and the inaugural ceremony of the fifth-term government of the HKSAR.

He also inspected the HKSAR.