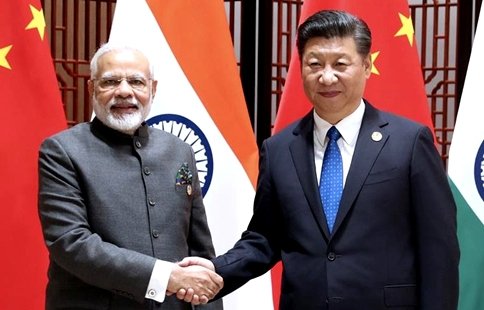 President Xi Jinping on Tuesday said healthy and stable relations between China and India are in line with the fundamental interests of their people.

China is willing to work with India on the basis of the Five Principles of Peaceful Coexistence to improve political mutual trust, promote mutually beneficial cooperation, and push Sino-Indian ties along the right track, he said.

Xi made the remarks when meeting with Indian Prime Minister Narendra Modi in the southeastern city of Xiamen after the ninth BRICS summit.

The Five Principles of Peaceful Coexistence are: mutual respect for sovereignty and territorial integrity, mutual non-aggression, non-interference in each other’s internal affairs, equality and mutual benefit, and peaceful coexistence.

The principles were endorsed by China and India in the 1950s, and have been widely accepted as norms for relations between countries.

Noting that the two neighboring countries are the world’s two largest emerging market and developing countries, Xi told Modi that healthy and stable bilateral relations are also in line with the expectations of the region and the international community.

For his part, Modi congratulated Xi on a successful BRICS summit.

He said the world is undergoing fast changes and the BRICS countries need to step up cooperation under such circumstances, adding that the Xiamen summit played a key role in this regard.

Xi and Modi’s meeting came following a military stand-off lasting more than two months after more than 270 armed Indian troops with two bulldozers crossed the boundary in mid-June into the Dong Lang (Doklam) area in the Chinese territory to obstruct infrastructure construction.

On Aug. 28, China confirmed that India had withdrawn personnel and equipment from Dong Lang, and said its armed forces would strengthen patrolling and defense of the area to resolutely safeguard the country’s sovereign security.