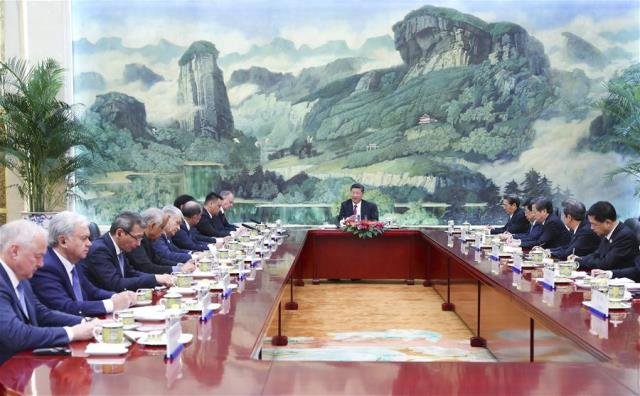 During the meeting, Xi suggested that the SCO member countries continue to uphold the common, comprehensive, cooperative and sustainable security concept, and promote a security governance model that addresses both symptoms and root causes, so as to push forward the SCO security cooperation to a new level.

The president voiced the hope that the mechanism of the SCO Security Council Secretaries meeting would actively adapt to changes in the situation, earnestly perform its duties, and provide stronger support for SCO member states to maintain national security and social stability.

Since the establishment of the SCO, the member states have always taken the maintenance of regional security and stability as a priority, said Xi.

By expanding areas of cooperation, cracking down on the “three evil forces”, namely terrorism, extremism and separatism, and preventing the spillover effect of the hotspot issues, the SCO has made important contributions to lasting stability and prosperity of the region, he said.

After its enlargement, the SCO enjoys greater potential for security cooperation and shoulders more responsibility, bearing more expectations from the people in the region and the international community, said Xi.

He suggested the SCO member states grasp the strategic direction of security cooperation, continue to consolidate strategic mutual trust, strengthen policy communication and coordination, adhere to fairness and justice, and jointly promote the peaceful resolution to hotspot issues through political and diplomatic means.

It is necessary to beef up the capacity for security action, build a more rigorous, sound and efficient law enforcement cooperation network and jointly strengthen the capability of safeguarding stability, said Xi.

China will continue to integrate its own safety with that of regional countries and work with other SCO members to build a new type of international relations for the building of a community with a shared future for humanity, he said.

They thanked Xi for attaching great importance to the security cooperation of the SCO member states.

They voiced support for China’s initiative on coping with common challenges and safeguarding international peace and security.

They expressed satisfaction with the outcomes of the 13th meeting of SCO Security Council Secretaries, saying it played an important role in preparing for the 18th SCO summit, which is scheduled to be held in Qingdao in June.

Under the new situation, the SCO has increasingly demonstrated its strong vitality, they said, agreeing to expand cooperation so that the SCO can play a greater role in international affairs.

Yang Jiechi, a member of the Political Bureau of the Communist Party of China (CPC) Central Committee and director of the Office of the Foreign Affairs Commission of the CPC Central Committee, met with Patrushev later Tuesday afternoon.

Yang hoped that the two sides would increase mutual support, expand practical cooperation, and strengthen coordination and cooperation in international affairs, so as to make greater contributions to the development of both countries, as well as peace and stability in the region and the world.

Patrushev said that Russia has always been committed to deepening ties with China, and is willing to work with China to actively implement the consensus of the heads of state of both countries, strengthen bilateral cooperation and promote the development of their relationship.