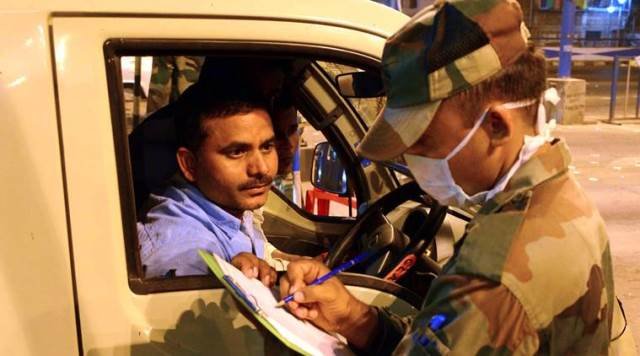 English Daily The Indian Express reports this morning that Mamata Banerjee said, “Army was today deployed at two toll plazas on National Highway 2 in West Bengal without informing state government. It is unprecedented and serious matter.”

Army has now been retreated from toll plaza near the state secretariat. Chief Minister Mamata Banerjee however, refuses to leave office till Army retreats across West Bengal.

Hours after her flight was made to hover over the Kolkata airport despite the plane reportedly running low on fuel, West Bengal Chief Minister Mamata Banerjee on Thursday alleged that Army was deployed at two toll plazas on National Highway 2 by the Centre without informing the state government and described it as “unprecedented and a serious matter.”

The Eastern command in a statement said, “Its a routine exercise with full knowledge & coordination with West Bengal Police. Speculation of army taking over toll plaza incorrect.”
The Defence CPRO said that the Army has been asked to withdraw from specific point and would be deployed somewhere else tomorrow.

State chief secretary, Home Secretary, DG and CP all have contradict army claim, saying that there was no communication from army at any level.

Addressing a press conference, Banerjee said, “I am saying this on record. Hope my words won’t be distorted. Army was today deployed at two toll plazas on National Highway 2 in West Bengal without informing state government. It is unprecedented and serious matter.”

“It is an attack on the federal structure. We want to know the details. The Chief Secretary is writing to the Centre. Given an opportunity I will talk to the President on the issue. Has Emergency been imposed in the country without declaration?” she wanted to know.

The Chief Minister said, “Army is our asset. We are proud of them. We requisition Army in times of major disaster or communal flare up. “I don’t know what has actually happened. Even if there is mock-trial, state government is informed”, she said.

Banerjee claimed that the people got panicky due to the deployment of Army at toll plazas.
When contacted, A Defence spokesperson said that the army conducts bi-annual exercise throughout the country with the aim of getting statistical data about the load carriers that could be made available to the army in case of a contingency. “There is nothing alarming about this and it is carried out as per government orders”, Wing Commander S S Birdi said. The exercise gives an estimate about the number of vehicles passing through a certain area that could be tapped during operations, he said.

Meanwhile, the Trinamool Congress wrote to Civil Aviation Minister Ashok Gajapati Raju, demanding a through inquiry by his ministry to unearth the truth behind Banerjee’s flight incident. “We have written a letter to Raju, demanding a high-level probe into the incident by the Civil Aviation Ministry to unfold the truth and reasons for the dilly-dallying attitude of the Air Traffic Controller, NSCBI airport,” TMC vice-president Mukul Roy told reporters.

Aviation regulator DGCA has ordered an inquiry into as many as three flights, including one carrying Banerjee, reporting low fuel at the same time, as TMC and other opposition parties alleged conspiracy and threat to her life. TMC raised the issue in both Houses of Parliament alleging that Banerjee’s flight was made to hover over Kolkata airport last evening for about half an hour despite the pilot
reporting that the plane was low on fuel.

Earlier in the day, the a row erupted Banerjee’s flight being made to hover over Kolkata it echoed in Parliament where TMC alleged threat to her life while the Centre asserted no one was in danger.

(With inputs from PTI)