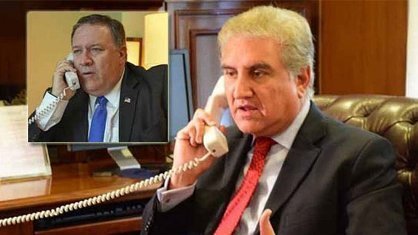 US Secretary of State Mike Pompeo discussed over the phone with his Pakistani counterpart on Friday the ongoing process to end the Afghan conflict as the country enters a critical phase in peace talks.

In reading out Pompeo’s call with Pakistani Foreign Minister Shah Mahmood Qureshi, State Department Spokesman Cale Brown said the top diplomats “discussed a range of issues” that included “the importance of US-Pakistan cooperation on the Afghan peace process and the importance of efforts to support regional stability.”

He did not offer further specifics on the other topics the officials addressed.

The US-Pakistan phone call comes as the Afghan capital on Friday began a legal assembly of elders — the highest consultative body — from across the country known as a Loya Jirga to discuss the fate of 400 Taliban prisoners and future of peace talks.

Afghan President Ashraf Ghani promised the long-awaited direct talks with the Taliban would commence as soon as the council decides on the fate of captive Taliban insurgents.

“ … the sooner you [council participants] decide, the better it is so that the talks between the Islamic Republic of Afghanistan and the Taliban begins,” said Ghani while defending democratic system in the face of insurgents bent upon reviving their “Islamic Emirate” in the country.

The event, set to last at least two days, has caught global attention as it is being held amid ongoing peace negotiations between the Taliban and the US.

Washington on Friday urged the participants in the assembly not to allow anyone to opt for “the status quo or complicate” the path to peace in Afghanistan.

In a series of tweets, the top US peace broker Zalmay Khalilzad dubbed the meeting of the Loya Jirga an “historic opportunity” to remove the last hurdle to direct peace talks.

“A positive outcome will mean a reduction in violence and Afghans immediately coming together at the negotiating table,” said the US special representative for Afghanistan reconciliation.

Security has been tightened in Kabul, with the deployment of thousands of additional forces.

Besides deciding the fate of 400 captive insurgents – a particularly thorny issue between Kabul and the Taliban – the gathering is also set to discuss other key matters such as a cease-fire extension, intra-Afghan talks, and proposed negotiations between the Afghan government and Taliban.

Associated Press of Pakistan (APP) reported discussion between the two sides focused on bilateral relations and developments in the region “with a view to promoting peace, prosperity and stability”, a Foreign Office statement here said.

Stressing the importance of the Pakistan-US relationship, the foreign minister stated that the leadership of both countries was committed to further strengthen it.

As per official Pakistan news agency APP, reviewing the recent developments in Afghanistan, Foreign Minister Qureshi reiterated Pakistan’s steadfast commitment to supporting all efforts for an inclusive and comprehensive political settlement. He stressed that the Afghan peace process should be pursued in all earnest.

Referring to the holding of Loya Jirga, he expressed the hope that a conducive environment would be created for the earliest convening of the intra-Afghan negotiations.