US-North Korea: Pompeo in Pyongyang to Flesh Out Summit Deal 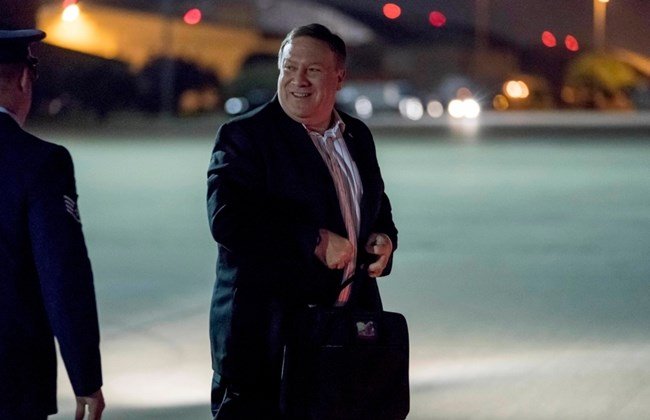 U.S. Secretary of State Mike Pompeo began a trip to North Korea on Friday on a mission to map out details of the communist nation’s “complete” denuclearization plan agreed to in the Singapore summit last month.

Landing at a Pyongyang airport, he was greeted by Kim Yong-chol, one of leader Kim Jong-un’s top aides, according to foreign news reports. Several reporters are accompanying the secretary on his first trip there since President Donald Trump’s talks with the North’s leader in Singapore on June 12.

Pompeo plans to have a day and a half of meetings with the North’s officials to follow up on the summit deal, which calls for improved bilateral relations and the complete denuclearization of Korea. It will be his first overnight stay in the North.

A reporter accompanying Pompeo on his Pyongyang trip tweeted later that the secretary held talks with Kim Yong-chol for almost 3 hours and that he plans to meet North Korean officials again early Saturday.

The United States hopes to maintain momentum amid news reports, based on U.S. intelligence sources, that the secretive North is continuing its nuclear activity.

“On this trip I’m seeking to fill in some details on those commitments and continue the momentum toward implementation of what the two leaders promised each other and the world,” Pompeo was quoted as telling reporters during a brief stopover in Japan earlier in the day.

Among the key issues are a timeline for the denuclearization process to start with a declaration of the North’s nuclear arsenal followed by verification work. The U.S. wants significant progress within a year.

In possible pursuit of a more realistic goal, the Trump administration has started formally using the term “final, fully-verified dismantlement (FFVD)” of the North’s nuclear program. It used to talk publicly about “complete, verifiable and irreversible denuclearization (CVID),” jargon which Pyongyang apparently loathes.

North Korea could also deliver the remains of some American soldiers killed in the 1950-53 Korean War on the occasion of Pompeo’s visit.

Its results will be a major test of Pyongyang’s commitment to the Singapore summit accord amid lingering skepticism.

Shortly after his trip to Pyongyang, Pompeo will fly to Tokyo for a trilateral meeting with his South Korean and Japanese counterparts — Kang Kyung-wha and Taro Kono – this weekend.

“Looking forward to continuing our work toward the final, fully verified denuclearization of #DPRK, as agreed to by Chairman Kim,” Pompeo also tweeted en route, using the acronym for North Korea’s formal name, the Democratic People’s Republic of Korea.

“Good to have the press along for the trip,” he added.

Meanwhile, U.S. National Security Adviser John Bolton said Sunday that he expects Pompeo to discuss with the North Koreans a plan to dismantle the nuclear weapons and ballistic missile programs in a year.

State Department spokeswoman Heather Nauert on Tuesday declined to provide a timeline, saying the secretary will be going into the meetings “eyes wide open, with a very clear view of these conversations.”

She also denied that the U.S. has eased its demand for “complete, verifiable and irreversible denuclearization,” speculation that emerged after the State Department started defining its goal as the “final, fully verified denuclearization” instead.

“Nothing could be further from the truth. Our policy toward North Korea has not changed,” Reuters quoted Nauert as telling reporters en route to Pyongyang. “We are committed to a denuclearized North Korea and Secretary Pompeo looks forward to continuing his consultations with North Korean leaders to follow up on the commitments made at the Singapore summit.”

News reports over the weekend cited U.S. intelligence sources as questioning the North’s commitment to abandoning its nuclear arsenal.

Many of them pointed to findings that indicate a build-up of the regime’s nuclear-related facilities. They also accused Pyongyang of trying to deceive Washington in order to extract concessions without ever giving up its nuclear program.

Doha, 25 June 2022 THE Embassy of Nepal and the Non-Resident ...
END_OF_DOCUMENT_TOKEN_TO_BE_REPLACED