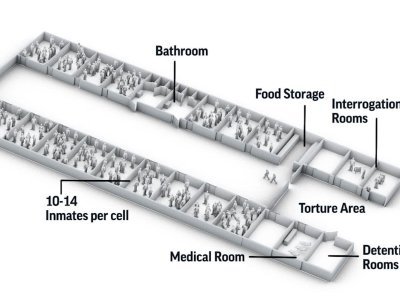 The Arab Organization for Human Rights in Britain expressed its concern about the aggravation of the crimes of the United Arab Emirates in places under its control in Yemen has reached the extent of threatening the social fabric and civil peace.

AOHR stated that the UAE is present in South Yemen with military and security forces supporting militias, supervising secret prisons, practicing torture and enforced disappearances, and systematically exploiting the wealth of Yemen in practices that mimic the actions of gangs, not states, not even the occupation or colonial entities.

The organization has shown that the UAE no longer hides its agendas in Yemen and has declared war on anyone who does not conform to its projects. It started a campaign of arbitrary arrests recently involving individuals and leaders of the Yemeni Rally for Reform.

The organization confirmed that those arrested were professional and community figures abducted from their homes at night after storming and tampering with the contents. Detainees who were able to document their names are:
1 – 44 years old, Mohammed Abdullah Abdul Malik, Assistant Secretary General of the Islah Party
2- Dr. Arif Ahmed Ali Said
3 –  27 years old, Mohammed Abdullah al-Hakimi Abdulrahman, a member of the Islah Party and works in the fund of cleanliness in the province of Aden
4. Ammar Mohammed Faree, a general practitioner, secretary general of the Medical Syndicate, coordinator of the Malaria program in Aden and member of the reform.
5 – 33 years old, Yousef Mohammed Faree, a graduate in economics, a member of the Islah Party
6 – Ayman Shakib Shawalh
7- Osama Ashfaq
8 – Mohammed Sharaf
9. Heib Hael Ahmed Hazam, a civil activist who works as an advisor to the director of the Friendship Hospital in the Department of Cancer Patients and Renal Failure. He was born in a charity in support of cancer patients. He is a member of the Islah Party.

The organization explained that the autobiography of most of the detainees as shown confirms the un-founded and just fabricated allegations.

The organization called on the international community to curb the practices of the UAE in Yemen as it poses a threat to stability in the region and efforts to stop the war that has come on everything in Yemen.

The UN Secretary-General also called for the need to move for the release of all detainees, Run by the UAE and its militias.