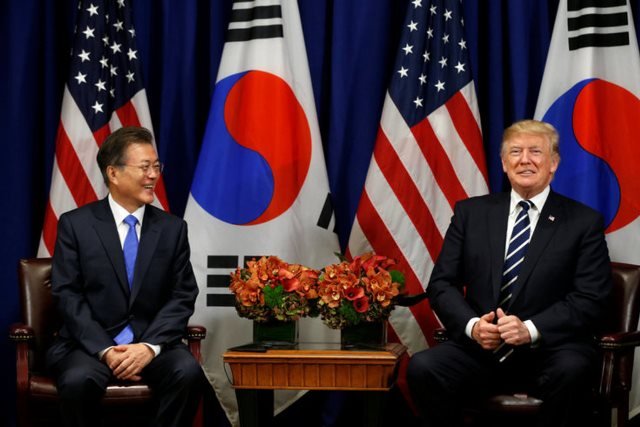 “President (Donald) Trump and President Moon (Jae-in) reaffirmed the two countries’ joint goal of pursuing the complete, verifiable, and irreversible denuclearization of North Korea in a peaceful manner,” the White House said in a readout of Trump and Moon’s Thursday meeting in New York.

The statement came days after Trump threatened in a speech at the United NationsGeneral Assembly that the United States “will have no choice than to totally destroy” the country unless Pyongyang refrains from its nuclear tests and missile launches.

On Friday, the top leader of the DPRK, Kim Jong Un, vowed to retaliate, saying Trump will “pay dearly” for “his speech calling for totally destroying the DPRK.”

Trump and Moon also agreed that “maximum pressure and sanctions” are necessary to deter the DPRK’s “threatening actions,” the White House statement said.

Trump on Thursday signed an executive order aimed at further cutting off sources of revenue that fund the DPRK’s nuclear program.

Also on Thursday, Chinese Foreign Minister Wang Yi said that China is firmly committed to the denuclearization of the Korean Peninsula during his speech at the General Debate of the 72nd session of the UN General Assembly.

Wang urged the DPRK not to go its own way in a dangerous direction. Meanwhile, he urged the United States to honor its “Four Nos” commitment to the DPRK, and called for all parties concerned to play constructive roles in relieving tensions in the region.

China’s proposal of “suspension for suspension” aims to find a breakthrough while the “dual track approach” plans to resolve all parties’ reasonable security concerns via dialogue and consultation in a balanced way thus finding a long-term resolution to the issue.

“Suspension for suspension” refers that the DPRK suspends its missile and nuclear activities in exchange for a halt to large-scale military exercises between the United States and ROK.

“Dual track approach” refers that denuclearizing the peninsula on the one hand and establishing a peace mechanism on the other.

Tension on the Korean Peninsula has been escalating following a series of missile launches and the Sept. 3 nuclear test conducted by Pyongyang.

The UN Security Council unanimously adopted a resolution on Sept. 11 to impose new sanctions on the DPRK over its latest nuclear test.

Doha, 12 May 2021 Taleban leadership in a statement to media ...
END_OF_DOCUMENT_TOKEN_TO_BE_REPLACED