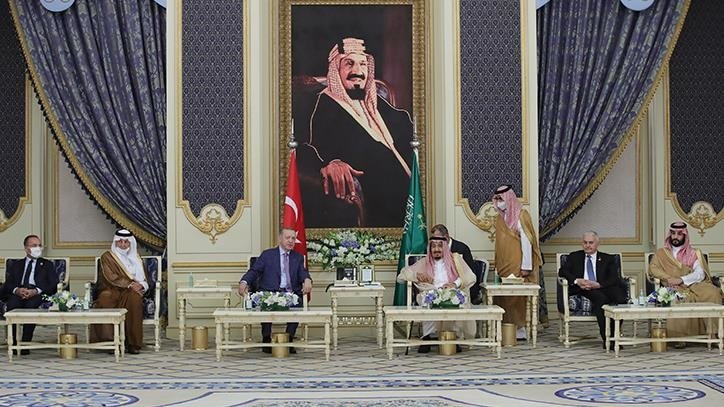 The two held a closed-door meeting at Al-Salam Royal Palace.

Earlier, the Turkish president arrived in Saudi Arabia for a two-day working visit.

Erdogan’s plane landed at King Abdulaziz International Airport in Jeddah where he was welcomed by Khalid Al-Faisal, the emir of Mecca region.

Turkiye and Saudi Arabia will start a “new era” to boost bilateral ties, Erdogan said on Thursday before his departure to Saudi Arabia.

“My visit (to Saudi Arabia) is the manifestation of our common will to start a new era of cooperation as two brotherly countries,” Erdogan told reporters at Istanbul’s Ataturk Airport.

“It is in our common interest to increase our cooperation with Saudi Arabia in fields such as health, energy, food security, agricultural technologies, defense industry, and finance,” he said.

“I believe we will boost our ties in every field through our joint efforts,” he said, stressing “the potential especially in renewable and clean energy technologies.”

He said regional and international developments will also be on the agenda during his visit. “We express at every occasion that we place as much importance on the stability and security of our brothers in the Gulf region as our own.”

Erdogan also underlined the importance of “dialogue and cooperation” for the security and stability of the entire region as “threats are growing more and more complex.”