Turkey Will Make No Concessions in Eastern Mediterranean, Erdogan 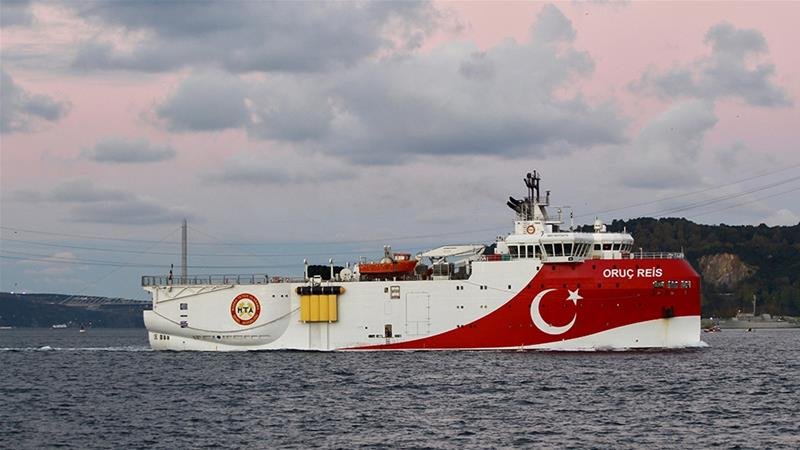 Turkey says it will hold live-fire exercises in the eastern Mediterranean on September 1 and 2, the latest in a series of military drills that have fuelled tensions with Greece.

The Turkish navy issued the latest advisory, known as a Navtex, on Thursday saying it will hold the shooting exercises in the eastern Mediterranean off the coast of Iskenderun, northeast of Cyprus.

The two NATO states have been locked in a bitter dispute over control of eastern Mediterranean waters that escalated after Ankara sent a seismic survey vessel to the disputed region this month – a move that Athens called illegal.

Turkey accused France of stoking tensions after Paris said it would join Italy, Greece and Cyprus in three-day air and sea military exercises in the eastern Mediterranean.

Turkish Defence Minister Hulusi Akar said Ankara would not be deterred by the show of force. “To believe that it would be possible to thwart the Turkish armed forces’ operations with exercises and similar activities is nothing more than a pipe dream,” Akar said in an interview with state-run Anadolu news agency.

The accusation came as European Union foreign ministers were set to meet in Berlin as they try to persuade EU member Greece and its neighbour Turkey to pull back from the brink of conflict.

The ministers were expected to debate a range of sanctions and other policy options that might convince Turkey to temper its insistence on drilling for energy reserves in disputed parts of the eastern Mediterranean.

Turkish foreign ministry spokesman Hami Aksoy said the deployment of French military aircraft in Cyprus violated treaties regarding the control and administration of the island after independence from Britain in 1960.

Aksoy said France’s stance was dangerously encouraging Greece and Cyprus to further escalate tensions in the region. Cyprus was divided in 1974 following a Turkish invasion triggered by a Greek-inspired coup. The island’s Greek Cypriots live in the south, and Turkish Cypriots in the north.

Germany’s foreign minister on Thursday called for an end to military drills taking place in the eastern Mediterranean.

Heiko Maas, who engaged in shuttle diplomacy between Athens and Ankara earlier this week, stressed the need to “create the conditions for Turkey and Greece to resolve their problems directly with each other”.

“The situation remains very difficult,” Maas said. “The precondition for these talks is that the manoeuvres that are going on in the eastern Mediterranean be ended – each side can make its contribution to that and so create the space for diplomatic talks, because for sure the parties won’t sit down at the table if warships are facing off in the eastern Mediterranean.”

Turkey’s President Recep Tayyip Erdogan has warned he would make “no concessions” in the eastern Mediterranean and that Ankara is determined to do whatever is necessary to obtain its rights in the Black, Aegean and Mediterranean Seas.Speaking at an event on Wednesday commemorating the 11th-century military victory by Seljuk Turks over the Byzantine empire at Malazgirt, Erdogan also called on Turkey’s counterparts to avoid mistakes that he said would bring their destruction.

“We don’t have our eye on someone else’s territory, sovereignty and interests, but we will make no concessions on that which is ours,” Erdogan said, urging Greece to “avoid wrongs that will be the path to ruin”. “We will not compromise what is ours… We are determined to do whatever is necessary.”

Later on Wednesday, Greek Prime Minister Kyriakos Mitsotakis told lawmakers Greece planned to extend the western limit of its territorial waters in the Ionian Sea from six to 12 nautical miles.

Mitsotakis said Italy and Albania had been officially informed about the plan and a bill on the matter would be submitted to parliament very soon. Such a measure does not affect the Aegean region, off Greece’s eastern and southern coasts, where Turkey has previously warned a similar move by Athens would be a “casus belli”, or cause for war.

Mitsotakis also said his country could eventually extend its territorial waters in other maritime areas where the distance between the two shores is smaller than 24 nautical miles.

Tensions over energy resources escalated between Turkey and Greece after Ankara sent its Oruc Reis survey vessel to disputed eastern Mediterranean waters this month, a move Athens has called illegal.

Germany has sought to mediate between Ankara and Athens.

On Tuesday, the foreign ministers of Turkey and Greece said they wanted to solve the matter through dialogue following separate talks with their German counterpart, Heiko Maas.

Al Jazeera’s Sinem Koseoglu, reporting from Istanbul, said Turkey had called Greece “a spoiled child that has unconditional support from the European Union”, and had also stressed the importance of why honest mediation is necessary for dialogue.

“Turkey says it is open to dialogue with Greece only if there is a fair distribution of rights in the eastern Mediterranean,” Koseoglu said.”But if Athens continues to present conditions for dialogue and doesn’t give up its uncompromising approach in the region, Ankara says a real conflict may become unavoidable.”

“The eastern Mediterranean is turning into an area of tension. Respect for international law must be the rule and not the exception,” Parly said on Twitter, adding that it “should not be a playground for the ambitions of some”. Three Rafale fighter jets and a warship equipped with a helicopter will be part of the joint military exercises, she said.

Relations between France and Turkey have soured in recent months over Ankara’s actions in NATO, Libya and the Mediterranean.

President Emmanuel Macron has called for the EU to show solidarity with Greece and Cyprus in the dispute over natural gas reserves off Cyprus and the extent of their continental shelves and pushed for further sanctions at EU level, although there are divisions in the bloc over the issue.

“Our message is simple: Priority to dialogue, cooperation and diplomacy so that the eastern Mediterranean becomes an area of stability and respect for international law,” Parly said.