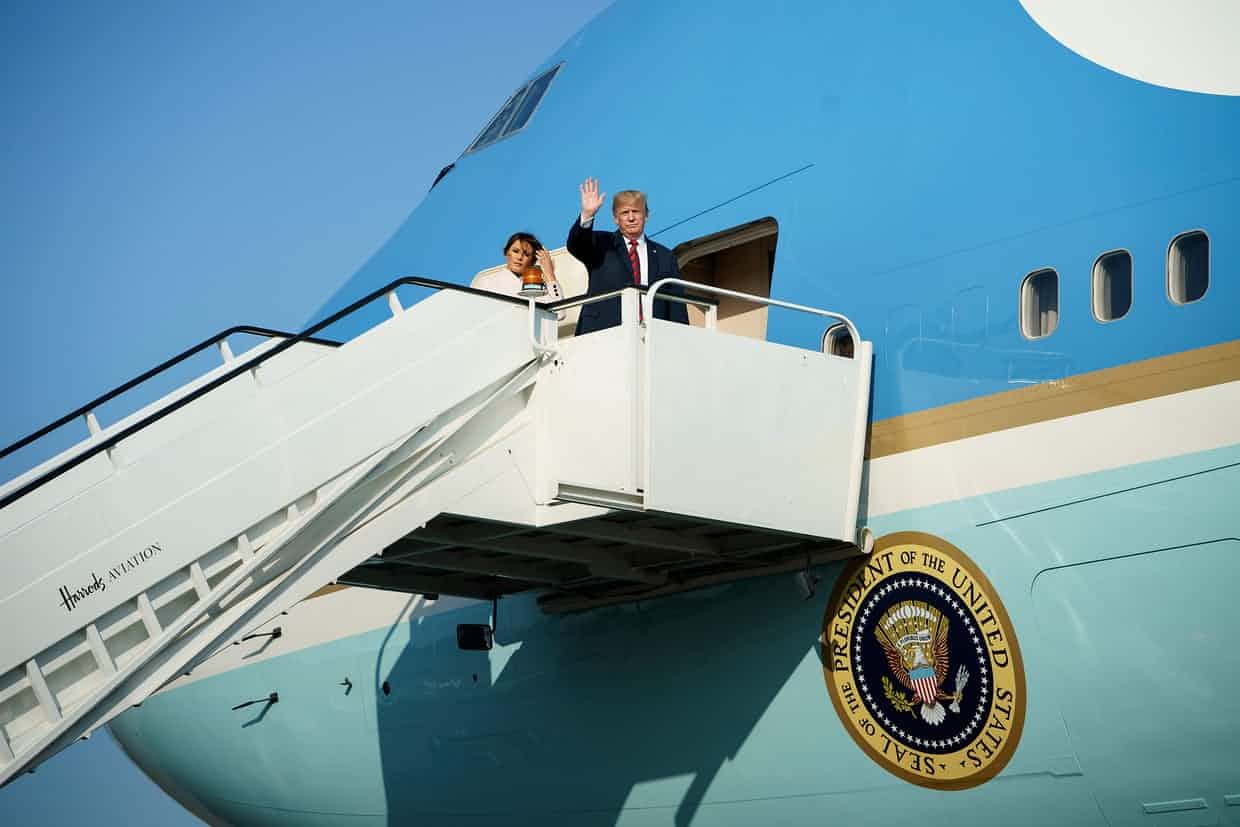 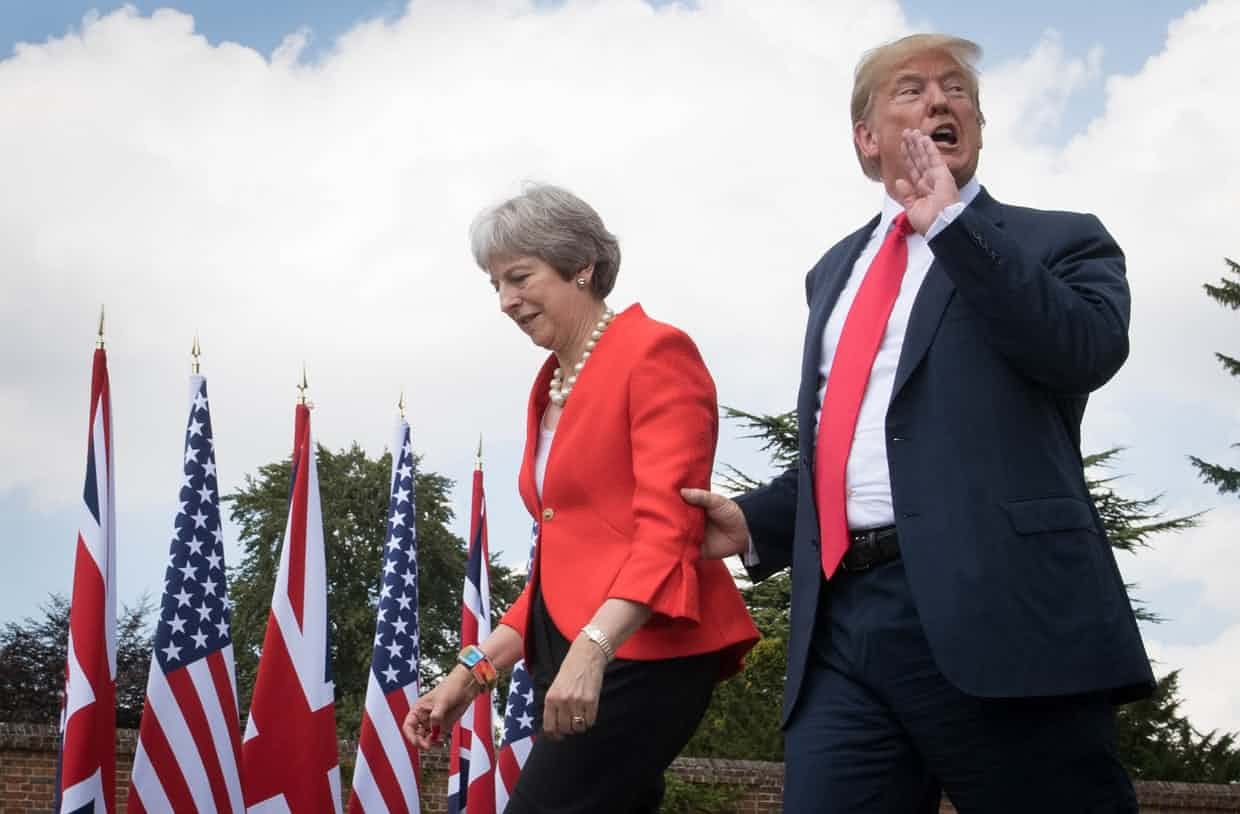 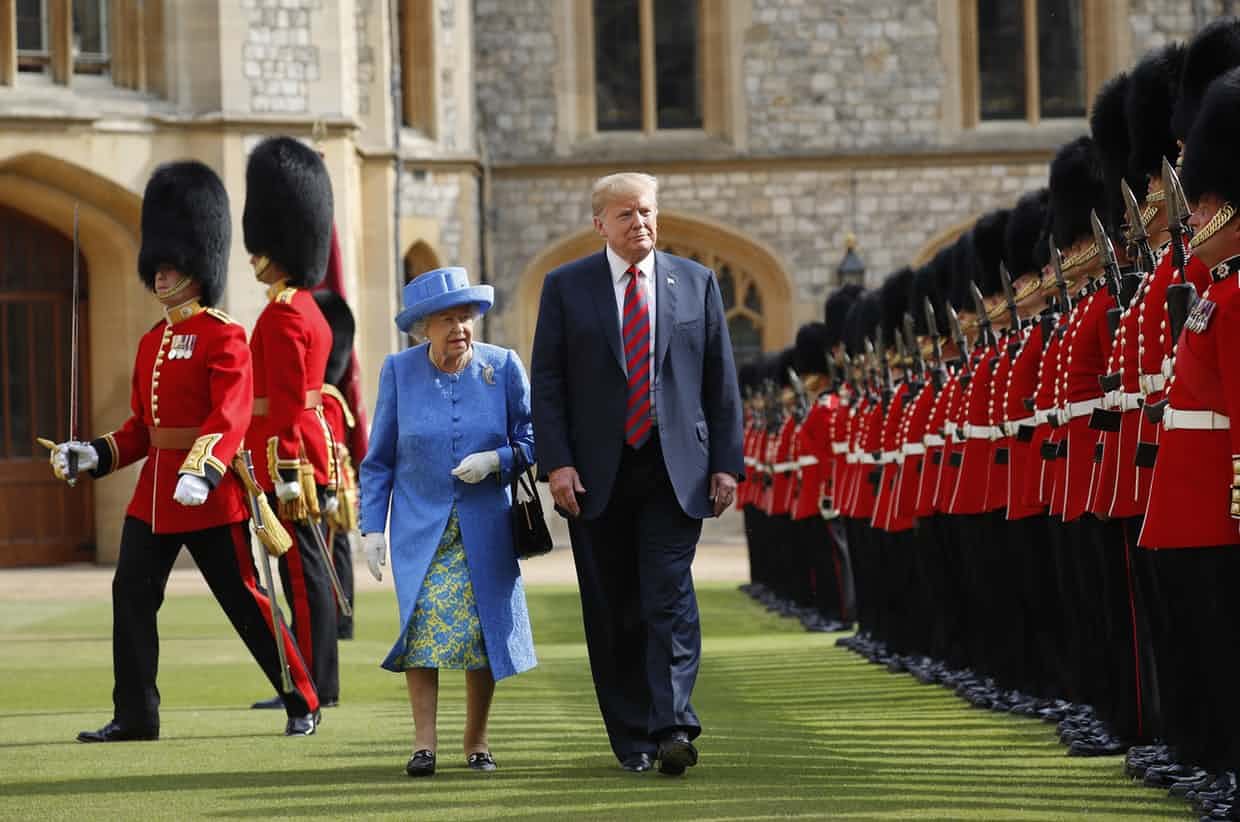 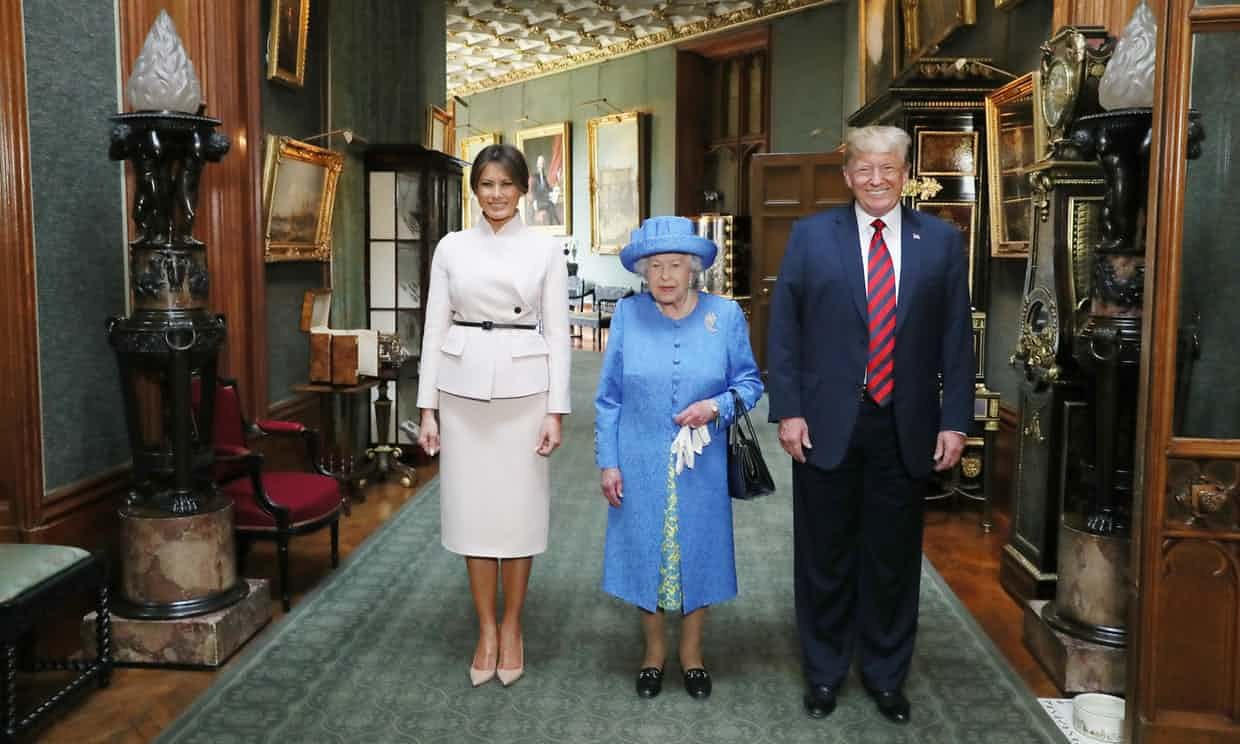 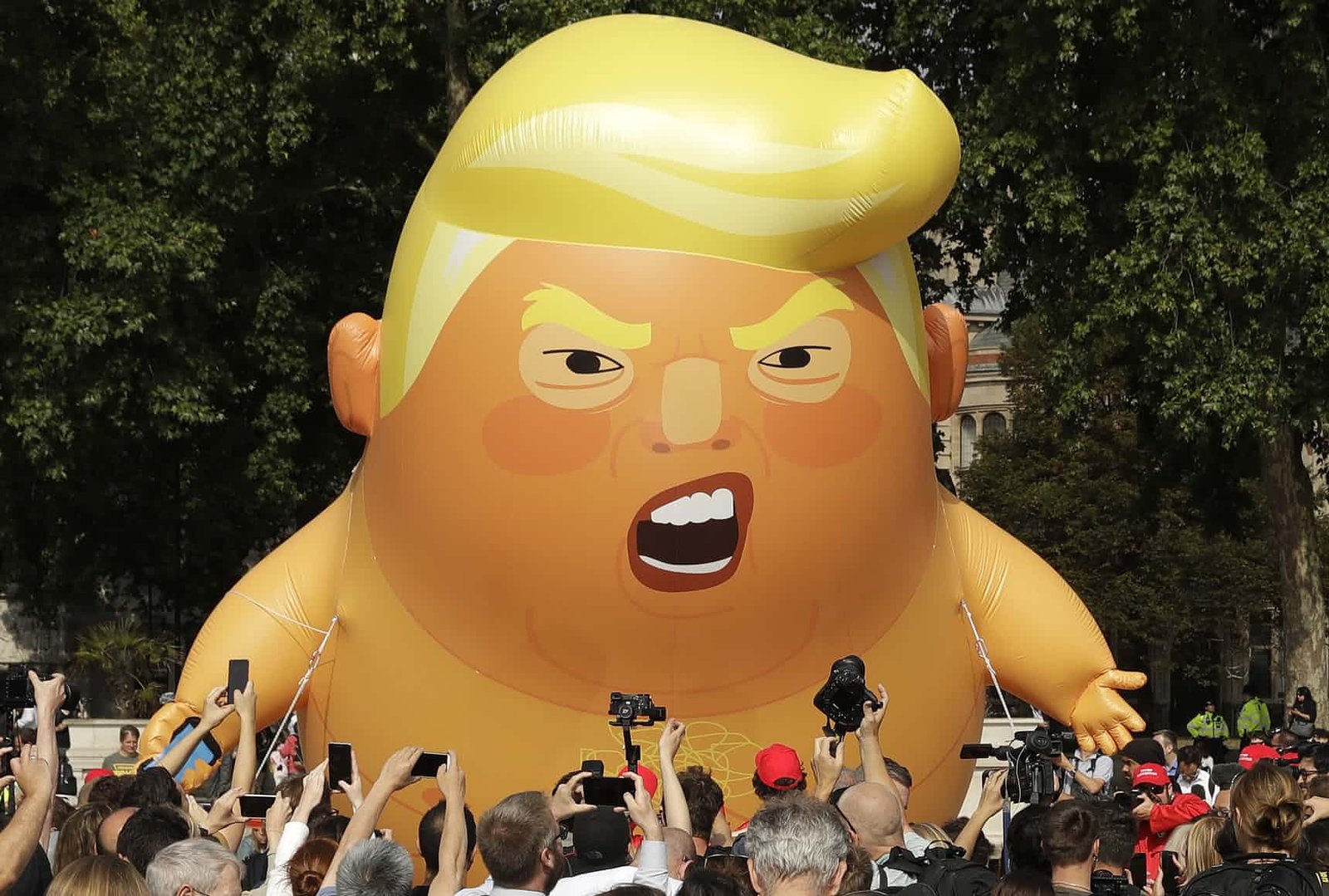 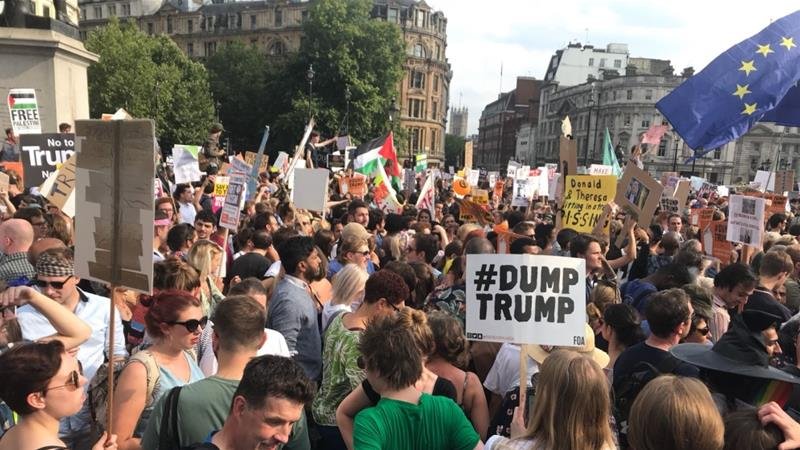 With wheels up on Air Force One, Donald Trump vanished into the skies above Stansted airport on Friday evening, bound for his luxury golf resort in Scotland and leaving a trail of diplomatic destruction in his wake.

The presidential hurricane had swept through southern England, uprooting protocols, rattling institutions and leaving politicians with a sense of whiplash. As the disrupter-in-chief’s MV-22 Osprey helicopters departed, Theresa May, could be forgiven for breathing a sigh of relief familiar to any sorely tested host.

This was a far cry from Bill Clinton strolling through Hyde Park during his presidential swansong or Barack Obama dropping in on a primary school in Newport. For Trump, making his first visit to the UK as president, there was no park and no school, no 10 Downing Street, no Houses of Parliament and no Buckingham Palace. Nor was this the state visit that May had promised when she dashed to Washington shortly after Trump took office. The tens of thousands of people marching in the streets of London might have had something to do with it.

Britain may have to humbly accept, however, that for Trump it was a mere stopover between hammering the German chancellor, Angela Merkel, at the Nato summit in Brussels and renewing his warm relationship with Russia’s president, Vladimir Putin, in Helsinki.

His day began at the US ambassador’s Regents Park residence, where some protesters had tried to generate noise to disturb his sleep – but he generally only gets four hours on a normal night. He tweeted early about elections happening in Florida, suggesting his mind was elsewhere.

First on his agenda, closed to the media, was viewing a joint military exercise at the Royal Military Academy Sandhurst in Surrey. It was likely to offer the kind of spectacle known to appeal to Trump, who did not serve in the Vietnam war due to five draft deferments but was wowed by a military parade on Bastille Day in Paris and is considering a similar show of strength in the US.

It was also the scene of a potentially awkward encounter with May following the Rupert Murdoch-owned Sun’s publication of an interview in which the US president said the prime minister had ignored his advice on Brexit and that her approach could scupper plans for a separate UK-US trade deal.

“She’s a total professional because when I saw her this morning I said, ‘I want to apologise because I said such good things about you’,” Trump said later. “She said, ‘Don’t worry, it’s only the press’. I thought that was very professional.”

Trump and May later traveled to Chequers, the prime minister’s country retreat, 40 miles from London. They held one-on-one talks, a working lunch and a joint press conference, where the president was in characteristically mercurial mood.

He claimed that the Sun’s article was “generally fine” but omitted his positive comments about May. “It’s called fake news,” he said, insisting that May was an “incredible woman … doing a fantastic job”.

Asked about claims that May ignored his advice, Trump said: “I gave her a suggestion, not advice, I wouldn’t want to give her advice, I’d give her a suggestion. I can fully understand why she thought it was a little bit tough and maybe someday she will do that – if they don’t make the right deal, she might very well do what I suggested that she might want to do.”

As for Brexit, he said “whatever you do is OK with me” but warned: “Just make sure we can trade together.” Trump described the UK-US relationship as the “highest level of special”.

May put a brave face on the embarrassment and presented Trump with an illustrated ancestral chart detailing his Scottish heritage, dating to the birth of his great-great-great grandfather in 1776, when the US declared independence from Britain. Trump’s mother, Mary Anne MacLeod, was born on the Isle of Lewis in the Hebrides and the chart was decorated with the MacLeod family crest and its tartan.

May and her husband Philip gave Melania Trump a custom-made perfume called The First Lady, presented in a bottle engraved with her initials and provided by J Floris Ltd, which has also made products believed to have been used by Winston Churchill, Marilyn Monroe and Princess Diana.

Then it was on to Windsor Castle for an audience with the Queen. On a red carpeted dais under a white tent, the monarch smiled generously as she shook the hands of Trump and his wife, then all three stood for the American national anthem. Trump walked side-by-side with the Queen as they inspected the busby-wearing Coldstream guards.

Outside the new US embassy in south-west London – mentioned in a Trump tweet last January in which he said he cancelled a trip to London because it represented a “bad deal. Wanted me to cut ribbon-NO!” – Robin Colette, 42, was a lone protester with a banner spread on the floor. “Too childish to have a phone let alone a presidency,” it said.

Colette, a pensions administrator from Croydon, explained: “He’s an arse in every way possible. He’s not a role model. He’s against women, he’s a racist. He’s every bad thing you can think of. I’m more afraid of him than of anyone else in the world.”

Would Trump heed the protests? “I’m not sure he’s capable of empathy,” he said. “He’s too thick skinned. But I hope America sees how he’s viewed by the rest of the world and think, ‘We can do a little bit better’.”

AlJazeera News reported Some 250,000 people on Friday descended onto the streets of the British capital to express their opposition to Trump’s four-day trip to Britain, according to Stop Trump, the group organising the protest.

The demonstrators marched through central London, chanting slogans and waving banners such as “Traitor hater would be dictator”.

“God save the Queen from an orange tangerine,” read another.