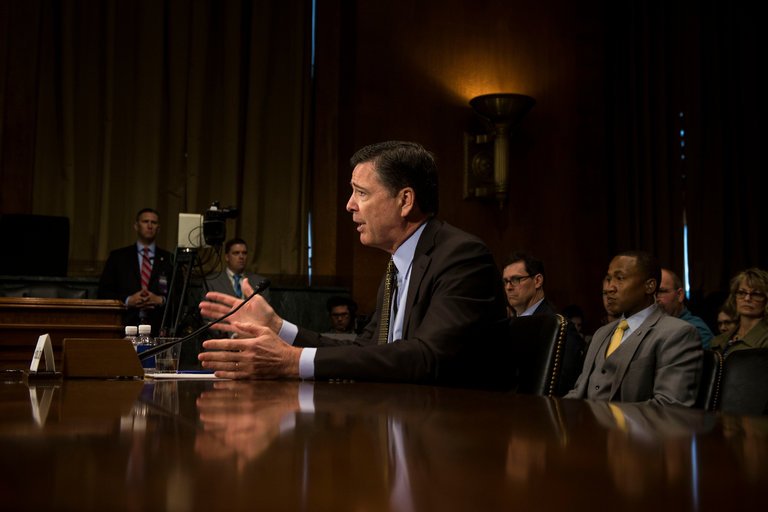 President Trump on Tuesday fired the director of the F.B.I., James B. Comey, abruptly terminating the top official leading a criminal investigation into whether Trump’s advisers colluded with the Russian government to steer the outcome of the 2016 presidential election.

The stunning development in Trump’s presidency raised the specter of political interference by a sitting president into an existing investigation by the nation’s leading law enforcement agency. It immediately ignited Democratic calls for a special counsel to lead the Russia inquiry.

Trump explained the firing by citing Comey’s handling of the investigation into Hillary Clinton’s use of a private email server, even though the president was widely seen to have benefited politically from that inquiry and had once praised Comey for his “guts” in his pursuit of Mrs. Clinton during the campaign.

But in his letter to Comey, released to reporters by the White House, the president betrayed his focus on the continuing inquiry into Russia and his aides.

“While I greatly appreciate you informing me, on three separate occasions, that I am not under investigation, I nevertheless concur with the judgment of the Department of Justice that you are not able to effectively lead the bureau,” Trump said in a letter to Comey dated Tuesday. White House officials refused to say anything more about the three occasions Trump cited.

The officials said that Attorney General Jeff Sessions and the deputy attorney general, Rod J. Rosenstein, pushed for Mr. Comey’s dismissal. But many in Washington, including veteran F.B.I. officers, saw a carefully choreographed effort by the president to create a pretense for a takedown of the president’s F.B.I. tormentor.

“I cannot defend the director’s handling of the conclusion of the investigation of Secretary Clinton’s emails,” Mr. Rosenstein wrote in another letter that was released by the White House, “and I do not understand his refusal to accept the nearly universal judgment that he was mistaken.”

Reaction in Washington was swift and fierce. Senator Chuck Schumer of New York, the Democratic leader, said the firing could make Americans suspect a cover-up. Mr. Trump lashed back later Tuesday night in a Twitter post: “Cryin’ Chuck Schumer stated recently, ‘I do not have confidence in him (James Comey) any longer.’ Then acts so indignant.”

Many Republicans assailed the president for making a rash decision that could have deep implications for their party. Representative Justin Amash, Republican of Michigan, said on Twitter that he now supports an independent commission to investigate the Russia links to Mr. Trump. He called Mr. Trump’s claim that Mr. Comey had cleared him three times “bizarre.”

“I’ve spent the last several hours trying to find an acceptable rationale for the timing of Comey’s firing,” Senator Jeff Flake, Republican of Arizona, said on Twitter. “I just can’t do it.”

In a sign of the F.B.I.’s intense interest in Mr. Trump’s advisers, a grand jury in Virginia issued subpoenas in recent weeks for records related to the former White House national security adviser, Michael T. Flynn, according to an American official familiar with the case. Mr. Flynn is under investigation for his financial ties to Russia and Turkey. Grand jury subpoenas are a routine part of federal investigations and are not a sign that charges are imminent. It was not clear that the subpoenas, which were first reported by CNN, were related to Mr. Comey’s firing.