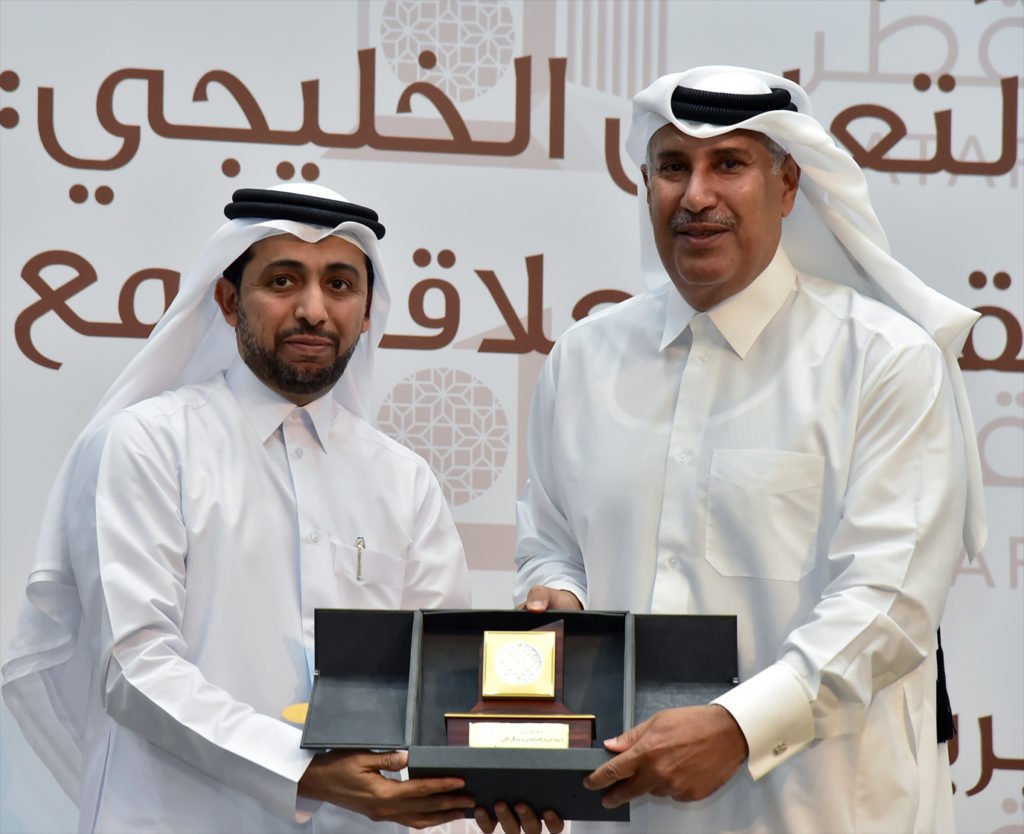 Sheikh Hamad bin Jassim bin Jabor Al Thani, Former Prime Minister of Qatar stressed on the importance of establishing a diplomatic, proactive and preventive joint policy between the Gulf states to face the policies aimed at creating tension and conflicts in the region.

He was Key-note speaker today in Qatar University Doha on ‘The States of The Gulf Cooperation Council: Regional Challenges and the Future of the Relations with Neighboring Countries’. Former Prime Minister & Foreign Minister of State of Qatar, Sheikh Hamad bin Jassim bin Jabor AlThani said “The Gulf citizens found a gap between their aspirations for unity and integration and the social and political reality. The region needs to create a comprehensive human development plan that prioritizes social development and the empowerment of its citizens to develop their lives in various fields.”

He highlighted the correlation between the security in Arab world and it’s impact on Gulf states security. Former Qatar Prime Minister discussed on the regional issues and talked on Iraq, Libya, Palestine, Syria and Yemen.

He said “Iran is the biggest beneficiary of the collapse of Iraq in 2003 and the many revolutions of the Arab Spring. The reaction of the Gulf states towards these issues was not effective enough to deal seriously with the latest developments on the regional and international arena. In this regard, it is necessary to create joint institutions between the Gulf states to offer effective solutions to the economic challenges in the post gas and oil phase.”

He also highlighted the causes of the conflicts in the countries that witnessed the Arab Spring, which resulted in the collapse of the previous systems and the obstruction of political horizons, as well as numerous revolutions and conflicts between yesterday’s allies on authority and power. He noted that the lack of effective planning and cooperation between the Arab states has led to this reality.

Earlier welcoming to the Chief Guest and Key-note speaker of the day and to the guests, Dr Hassan Al Derham, President of Qatar University said “We are honored to host H.E. Sheikh Hamad Bin Jassim Bin Jabor Al Thani to give us today a lecture on the current situation in the region, as well as his vision on the future and the regional latest developments and their impact on the states of the Gulf Cooperation Council. Through its Distinguished Lecture Series, Qatar University is committed to offer its students a successful experience during their academic journey by providing them with the opportunity to get acquainted with national and international experts in various areas. The organization is also committed to provide its faculty members, researchers and students with opportunities to get insight into the experiences of policy and decision makers, which is of the benefit of the university members.”

He said “Over the last four decades, Qatar University has provided to Qatar thousands of graduates, experts, intellectuals, scientists and leaders, who contribute to the country’s progress and growth in many areas. Qatar University continues to deliver on its mission to realize the goals of Qatar National Vision 2030. To achieve this, the University has implemented many objectives within its development strategy, among which is the objective to drive forward its role as a key partner of intellectual and cultural growth in Qatar and the region through a number of initiatives.”