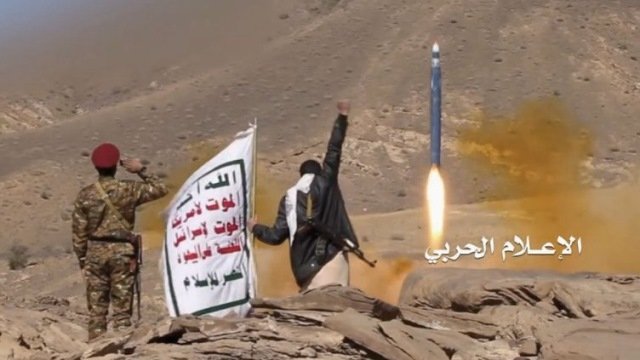 A Burkan-2H ballistic missile that was shown to a television news team showed no indication it had been intercepted by a Saudi Patriot air defence system as claimed.

A CNN team was taken to a Saudi military base on 17 January where it was allowed to film the remnants of a ballistic missile clearly marked as a Burkan-2H. The Saudi-led coalition said it was launched from Yemen and intercepted by a Patriot south of Riyadh on 19 December 2017.

CNN reiterated the Saudi claim, saying the missile was shot down about 15 miles (24 km) from Riyadh, but the remnants it filmed showed no sign that it had been hit by the fragmentation from a Patriot PAC-2 missile or been struck by one of the new PAC-3 ‘hit-to-kill’ missiles Saudi Arabia is buying. It also appeared the re-entry vehicle (RV) containing its warhead separated from its main body as designed.

This was the third Burkan-2H, which has a confirmed range of 900 km, to be launched into Saudi Arabia by Yemen’s Ansar Allah group.

The Saudi-led coalition claimed the Burkan-2H launched at Riyadh on 4 November was also intercepted. It was subsequently displayed in the United States, but showed no indication it had been intercepted. Fragments of warhead were also displayed, suggesting it had detonated after hitting the ground as they would have been difficult to recover after an aerial detonation.

In both attacks the missiles’ rocket motors appear to have broken in two after re-entry, but in different places.