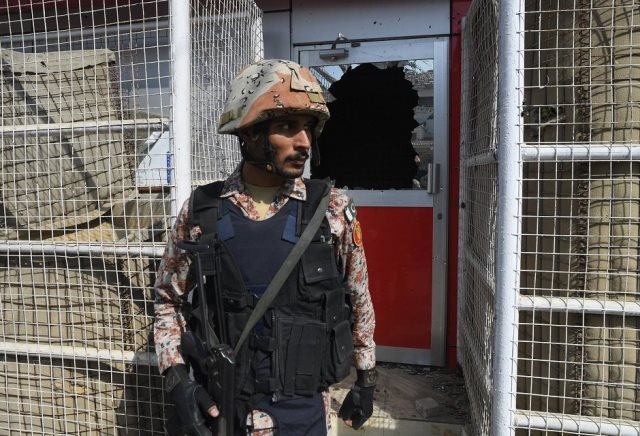 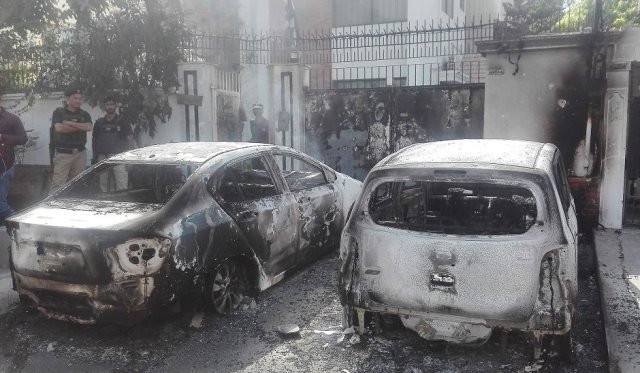 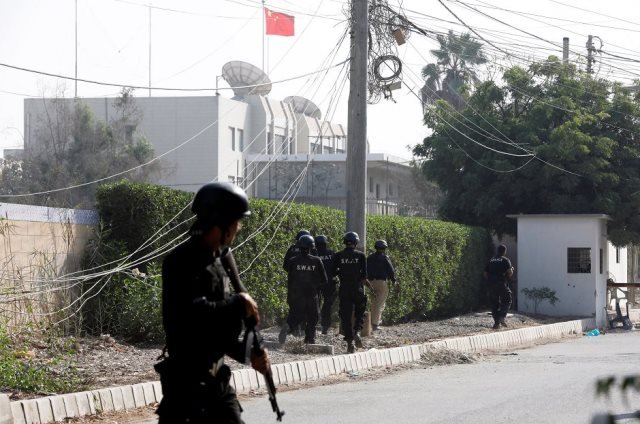 The police officers were identified as Assistant Sub Inspector Ashraf Dawood and Constable Amir, while the private security guard was identified as Muhammad Juman according to police.

Two civilians, a father and son, named Zahir Shah and Abdul Karim, were also killed in the attack, Dr Jamali said. Three terrorists were killed in the operation by security forces, according to Sindh Police and the army’s media wing.

The heavily-guarded E-Street neighbourhood, which is considered a red zone, is home to a number of upscale restaurants, diplomatic missions and schools. The schools and eateries were locked down while a clearance operation was initiated.

Foreign Minister Shah Mahmood Qureshi and police officials said it was too early to comment on who was behind the attack. However, the banned Balochistan Liberation Army (BLA) via its Twitter account — which has now been suspended — reportedly claimed responsibility. The claim could not be verified independently.

Gunshots and multiple blasts were heard in the area between 9:30am and 10am. Images from the area showed smoke rising from the Chinese Consulate building, which also serves as the residence for Chinese diplomats and other staff.

The attackers first opened fire at a checkpost, then detonated a hand grenade in the area, DawnNewsTV reported. Additional Inspector General (AIG) Amir Shaikh said that the attackers had parked their vehicle at some distance from the embassy before moving towards it.

Defence analyst and security contractor Ikram Sehgal, whose company’s guards have been posted at the consulate, said that the attackers engaged in an exchange of fire with policemen.

After the policemen were martyred, he said, the attackers proceeded towards the gate of the consulate. However, the guards were quick to usher civilians with consular business into the building and shut the gates behind them. Chinese staff at the embassy were taken to a main building, Sehgal added.

Muhammad Ashfaq, a police official quoted by the Associated Press, said that the attackers opened fire at the consulate guards and then managed to breach the main gate and enter the building.

Shortly after, the Rangers arrived in the area and an hour-long exchange of fire took place between security forces and the attackers, leaving three terrorists killed. Weapons and explosive materials were recovered from the attackers, police said.

Deputy Inspector General (DIG) South Javed Alam Odho told AFP that at least one attacker had been wearing a suicide vest which did not detonate. Police and Rangers began a combined operation in the area, and the Bomb Disposal Squad began conducting a sweep to ensure there are no more explosive materials in the area.

Police said that all Chinese staffers “are safe and secure”. The security situation has been brought under control and all areas will soon be cleared, they added, and police have been deployed inside the consulate.

At 12:15pm, a Rangers spokesman told journalists that the search operation had been completed. He added that all diplomatic staff is secure, and praised the Rangers, Police and FC personnel for their quick response to the attack. Explosives and weapons were recovered from the site, he said, adding that more details would be shared later.

IGP Imam briefed the Chinese consul general about the successful combined operation conducted by security forces. He also congratulated Assistant Superintendent Police Suhai Aziz Talpur ─ who has been handed the charge of SP ─ for running the successful security operation which foiled the attack.

The IGP also recommended ASP Talpur for a Quaid-i-Azam police medal for demonstrating bravery during the attack. She is the first female police officer for whom the award has been recommended, according to the Sindh police.

Governor Imran Ismail also took notice of the attack. The governor called for a report on the matter from the Sindh police chief.

Shah later told media persons that three terrorists reached the Chinese consulate at around 9:10am. “The police stationed at the consulate resisted and an exchange of fire began,” he said, adding that the terrorists had wanted to enter the consulate premises but their attempts were thwarted by police