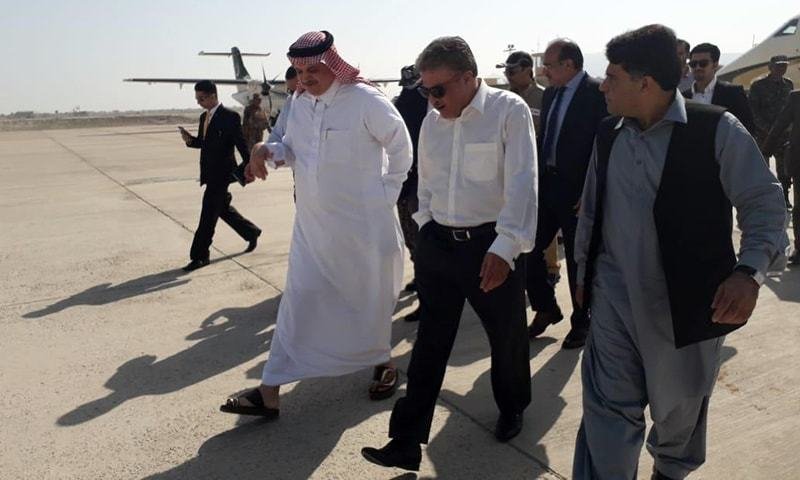 Saudi Arabia on Wednesday agreed in principle to set up a major refinery at Gwadar and showed serious commitment to make investments in other areas of energy sector, according to federal Minister for Petroleum Ghulam Sarwar Khan.

The minister told journalists that the two sides had agreed to set up an oil refinery at Gwadar and a summary would be moved to the federal cabinet on Thursday (today) for approval to sign a memorandum of understanding (MoU).

He said the Saudi minister for energy was expected to visit Islamabad later this month for signing of the MoU. He said the visiting Saudi delegation was offered to participate in the $2bn North-South Gas Pipeline and bid for the upcoming 10 petroleum exploration blocks to be offered for auction soon.

Mr Khan was talking to journalists after holding a meeting with the Saudi delegation led by energy adviser Ahmad Hamid Al-Ghamidi.

The minister said Saudi Arabia enjoyed great respect in Pakistan and both countries had strong bilateral brotherly relations that would scale new heights under the present government. The proposed 500,000 barrels per day refinery is estimated to be completed with an investment of about $8-9bn.

On the sidelines, Pakistan updated China about the progress on engagements with Saudi delegation.

An official said that Chinese Ambassador Yao Jing on Wednesday called on Minister for Planning and Development Makhdoom Khusro Bakhtiar who is also focal person on CPEC.

Mr Bakhtiar told the ambassador that development of refinery would be more important for Pakistan than Saudi Arabia because it would significantly reduce Islamabad’s oil import bill estimated for current year at $18bn. This would also ensure that Pakistan’s requirement for financial support from the International Monetary Fund is minimised.

The planning minister and the ambassador also finalised plans for creation of a new joint working group on social sector and upcoming visit of Prime Minister Imran Khan to Beijing to attend an industry conference with a business delegation. The two sides viewed it as an opportunity to reduce the China-Pakistan trade gap.

A statement issued by the petroleum division quoted the Saudi delegation as telling the minister that they had visited Gwadar site allocated for the purpose and would like the hosts to provide a suitable piece of land for the refinery.

A senior official who was part of the consultative process said the two sides shared a ‘wish list’ of around eight to nine items for Saudi investment and hoped three to four of those items would materialise over the next few months. “Our priority is to focus on smaller deliverable projects of $1-2bn each in the first phase before getting into mega projects,” he said.

Responding to a question, the official explained that the visit of the Saudi delegation was of fact finding nature and its level of serious commitment for investments appeared very encouraging. “We have been successful in generating their strong interest and it would now also depend on our abilities to materialise some of these projects”, he said.

Officials said the delegation also showed strong interest in Liquefied Natural Gas based power projects. Since these projects are currently operational, competitive bidding would be the only way to move forward, they said.

Responding to a question, the official said question of oil supplies on deferred payment and taking stakes in Reko Diq were not a priority for the two countries at this stage. While the question of oil supplies has to be deliberated by the finance ministers of the two nations, a mega project like Reko Diq involving $15-20bn could not be taken up seriously amid uncertainty about its legal status. The mineral project is currently under international arbitration.