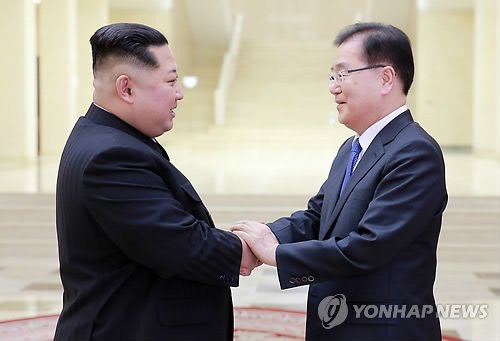 Officials from South Korea and North Korea held “serious and thorough” discussions Thursday at a meeting inside the heavily-fortified demilitarized zone (DMZ) to arrange a summit between their leaders to be held later in the month, an official from Seoul’s presidential office Cheong Wa Dae said.

Kwun, who is in charge of running Cheong Wa Dae’s press center, was part of South Korea’s five-member delegation to the working-level dialogue, led by Kim Sang-gyun, a senior director from the National Intelligence Service.

The North’s six-member delegation was led by Kim Chang-son, an official from the North’s state affairs commission, which is chaired by the reclusive North Korean leader, according to Kwun.

The working-level dialogue began shortly after 10 a.m. (Seoul time) on the South Korean side of the joint security area (JSA), also known as Panmunjom, and ended around 2 p.m.

The meeting came one week after the two Koreas agreed to hold a meeting of their leaders on April 27 in a high-level dialogue held on the North Korean side of the JSA.

Thursday’s talks sought to discuss security measures, protocol and media coverage of what would be a third inter-Korean summit, according to Kwun.

The sides have agreed to hold at least one more round of working-level dialogue to discuss the same topics, the Cheong Wa Dae official said, adding that the date for the next round will be decided later.

Separate groups of working-level officials from the two Koreas are set to meet Saturday to discuss the establishment of a communication hotline between the South Korean and North Korean leaders, which the countries have agreed to install.

Thursday’s meeting was originally set to be held Wednesday, but the North asked that it be delayed by one day.

The summit between South Korean President Moon Jae-in and North Korean leader Kim Jong-un is scheduled to be held on the South Korean side of the JSA, which is located inside the DMZ that divides the two Koreas.

It will, if held, mark the first time for a North Korean leader to step on South Korean soil since at least the end of the 1950-53 Korean War. The two previous inter-Korean summits, held in 2000 and 2007, both took place in Pyongyang.

South and North Korea remain technically at war, as the Korean War ended with an armistice and not a peace treaty.

The proposed summit follows a flurry of dialogue and exchanges between the two Koreas around the PyeongChang Winter Olympic and Paralympic Games in South Korea earlier this year.

Moon’s top security advisor, Chung Eui-yong, traveled to Pyongyang early last month to meet the reclusive North Korean leader and reach an agreement on the inter-Korean summit, as well as on a U.S.-North Korea summit.

U.S. President Donald Trump has said he will meet North Korea’s Kim in May. The date and location of the U.S.-North Korea summit have yet to be decided.