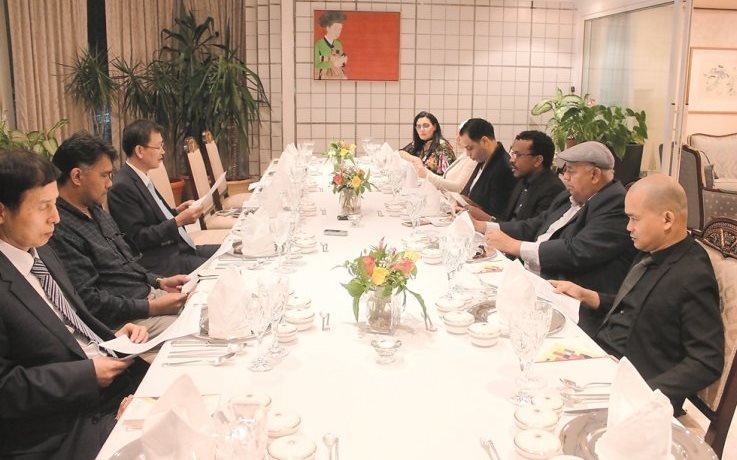 The South Korean Embassy has arranged number of cultural and sports events to mark its National Day celebrations in Qatar.

over more than 2,000 years. “Naturally, Korea has 12 Unesco world heritage sites and 19 Unesco intangible cultural heritages in the format of music, dance and other communal activities. These cultural heritages have provided a rich ground for the contemporary K-pop, K-drama and K-movies,” he said.

Ambassador giving details of the various events being organised during 2017, elaborated that in the evening of Monday, 13th November in collaboration of Katara Cultural Village, globally acclaimed b-boy group, Jinjo Crew will enthrall the audience at their “Rhythm of Korea” show at Katara Drama Theatre. The group has won five major world b-boy contests and achieved the first b-boy grand slam in 40 years of b-boy history.

They will show dynamic dances to the fast rhythms of Korea and Kukkiwon Taekwondo Demonstration Team will focus on the speed of physical actions in three areas namely forms, sparring and breaking.

Korean Envoy told that Doha-based Korean restaurants and groceries will present Korean food at the official diplomatic reception arranged in the ambassador’s residence garden.  Korean children will be displaying Taekwondo on the occasion.

“After Taekwondo started reforming from Korean traditional martial art since 1940s, it has continuously developed and spread across the world. As of now, 80m people are practicing Taekwondo as Olympic event in 206 countries,” told by ambassador Park.

On Saturday 11th November,  a taekwondo competition was held at the Basketball Stadium of Education City in cooperation with Qatar Taekwondo and Karate Federation and Korean community in Qatar.

In addition to sport and cultural events, a round table discussion on the situation of Korean peninsula with Dr Shin  eom-chul will be held on November 20 at W Doha Hotel.

20 January 2022 By Ashraf Siddiqui More than 7,000 books of different ...
END_OF_DOCUMENT_TOKEN_TO_BE_REPLACED